Trying to Keep Up

As you know, we moved up north this summer, and while we have adjusted to the new location/surroundings, we have also become really busy in getting involved around here!  So this is an update on what we’ve been up to, and what this busy momma has been doing!  As far as the volleyball season went, we lost in Round 2 of Regionals, ending a solid season of my first year of coaching varsity.  I had a ton of fun with the girls and they developed a lot as individual players and as a team.  It was exciting to be a part of it all.
I’ve been working at the YMCA in Rhinelander, starting out with just teaching swim lessons and lifeguarding.  I have since become a Fitness Coach as well, and now I work some mornings in the Wellness Center.  This gives me a great opportunity to have more face-time with people and meet more triathletes!  A mother of one of my swim girls also asked me if I would be interested in coaching the Under 8 kids in the Rhinelander Swim Club.  As a result, coaching for the swim club started up the week after volleyball was done, and it will continue until around the time of Track & Field in the spring.  This is a lower level of commitment though as it is only three days per week for an hour.
I ran the Ashland Whistlestop Marathon in October.  I did the majority of my training for it on the Three Eagle Trail here, which runs from Three Lakes to Eagle River and is about 13 miles in length.  It is a crushed limestone trail and is in very good condition.  I was expecting that the Ashland trail would also be in a similar condition, but I ended up being very disappointed by it.  Not only were there very soft, sandy spots, but there were also larger rocks that were rough on the feet.  It was still pretty scenery of course, but nothing can compare to that of the Three Eagle trail, which winds and curves its way through the woods, and has sweet boardwalks to cross as well.  It is absolutely gorgeous.  So after I got back from the marathon, I contacted the head of the Foundation for the Three Eagle Trail and now we are in the midst of planning for a Half-Marathon and 5K run on the trail October 11th of 2014, and I will be one of the race directors for it!  I am very excited about this endeavor, and so glad to have Andy on board with me as well, as he is doing the logo and helping with stuff that is online or in print.  More information will come about this later on!
While working in the Wellness Center, it became apparent that others recognize me as “the swimmer.”  While I find it amusing to be viewed as such (after all, I did just learn to swim properly less than 2 years ago), it has also been great in generating interest from others who would like to learn from me.  As a result, I will be leading an adult freestyle swim clinic in December, aimed at triathletes or any other adults looking to improve their freestyle swim.  I’ve taken part in two clinics in the past, and I have been using the model that I learned through them when I work with other adults, and I look forward to spearheading my own clinic this time around.  I would also like to pursue the formation of a Triathlon Club of the Northwoods at some point.  There are not a lot of triathletes around here (I discovered that very quickly as I walked into the Trek retailer and discovered no tri bikes on the floor), but I am finding a few here and there and hope to create a network of us that can connect with one another, learn, and get some group workouts in!
I have also been in conversation with another potential sponsorship, but at this point, I won’t leak anything just yet!  Hopefully a post in the future will hold some great news.  Other than that, I have been keeping up with training, for the most part anyway.  I am now in a swim focus training block, and so I will be spending a good deal of time in the pool, while maintaining my run fitness and starting to add some intervals to the bike sessions occasionally again.  Andy and I have been discussing the potential races for next season as well.  Currently, I am only registered for one at this point – USAT Nationals 2014 in Milwaukee!  That’s right, I qualified at both Chisago Lakes and Pigman and plan to race at Nationals on August 9th!
One other big item that has kept us busy is that we have been looking at houses!  We have one in our sights and hope to close on it soon.  More details on that in an upcoming post!
Posted by Jayme Wyss at 8:57 PM No comments:

Complications of Being a Mommy Triathlete

Before a baby enters the picture, the triathlete lifestyle is quite simple.  It’s as simple as routine.  If  I want to do a run, ride, or swim, I just go do it.  The only complications may be pool availability or weather conditions that require an adaptation to the workout to perhaps make it an indoor one.  There does require some strategy, some planning,  but in comparison to life with a baby, it’s much more like putting together the edges of a puzzle instead of the middle, especially if the puzzle is something insanely difficult like a black cat.  Throw a baby into the picture, and life becomes even more complicated.  Sometimes you can do all the planning and strategizing to make a training session happen, and all of your plans still end up being thrown out the window. 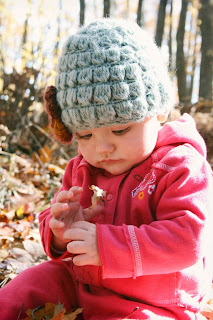 There have been stretches of times, days on end even, where I have been able to get in everything I set out to do.  Some days I’ve even surprised myself with all of the extra household tasks I’ve also been able to get done.  Then there are the other days.  With the fall and onset of winter, there also arrives the flu and cold season with it.  The best-laid plans and intentions don’t stand a chance against it, and our household has not been able to escape its treachery either.
The plans for a day like today?  I could capitalize on the 8-11:30am drop-in childcare at the Y in order to fit in a swim, my lifeguard shift, and a quick run on the treadmill before picking Baya up and heading home.  Sounds like an excellent morning to me!  Once home, I could eat a quick lunch and hop on the trainer and bike for an hour if she stuck with her “schedule” of taking a long nap at that time.  That should even leave me some time to do the dishes and work on some writing.  Instead, however, after Andy left for work, Baya couldn’t stop coughing and ended up throwing up.  Again.  I got me and her cleaned up and changed, called into work that I would be missing my shift, feeling that I should not take her into childcare with her having thrown up 3 times in the last 12 hours.  This also meant that I would miss my swim.
Yesterday became quite nice out so I was able to run outdoors with her, but we awoke this morning to snow and cold, and I do not feel that is a good option for her today.  There goes the run.   I am pretty adamant about running everyday too, so this is where it also becomes a mental battle to accept the situation that I am in.  Good thing I can at least bike still, right?  What should have been a 2.5-3 hour nap was cut short and I missed the entire ride!  Of course.
Yes, there are days like today that make it tough to be a mom and seriously pursue triathlons at the same time.  Days like today also test mental toughness.  I can push through hard workouts and races.  It is actually easier to push through them than miss them altogether.  This is also a great reminder for perspective, because in the grand scheme of things, missing today’s workouts (or even a few more), aren’t going to make that big of a difference.  Triathlon is a lifelong pursuit, but so is being a parent. 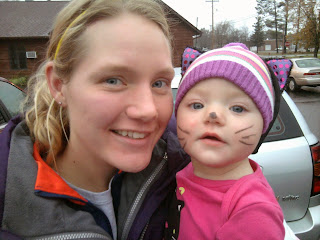 Now don’t get me wrong, I’m not going to be one of those people who say to embrace and cherish all these moments.  Cleaning up vomit and  listening to seemingly endless whining and crying is not fun, nor is it something I will cherish.  She does not suddenly turn into a little girl who just wants to cuddle.  She does not like to be cuddled much, there is just too much to see and do (much like her mom I guess).  However, being there for your kid when they really need you, definitely surpasses the importance of any workout.  There will always be another day, and another opportunity to train (and this is only the off-season after all).  Being a mom will always come first.  Now it’s time to finish the laundry and celebrate having clean clothes again, at least for a little while.

Posted by Jayme Wyss at 2:15 PM No comments: