While the two boys are napping, I head out to the garage for, what is typically, my second workout of the day. Some days it might be a run and a quick lift. Other days involve a bike workout. Baya is past the age of naps, and so she will often come out with me and keep me company. She is good at keeping busy and preoccupying herself. 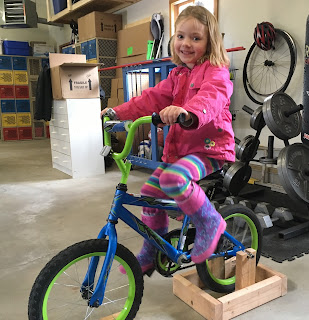 Last fall, Baya actually got rid of her training wheels, with the goal of doing some BMX racing this summer (you can’t race with training wheels). The garage isn’t big enough to ride her bike around though, so she’ll often ride Myles’s tricycle around instead. This last weekend though, her Daddy built her a sweet upgrade so she can now bike indoors “like her mom.” I think she rode her bike for 20 minutes straight today on her "bike trainer" while I ran. She thought I should have been biking too, but after almost 2 hours on my bike yesterday, there was no way I was getting on it today! After my run, we both did a little weight lifting.
We do not push youth sports in our house, but we do want to raise our kids to have an active lifestyle, and we want to lead by example. Our kids have seen us coach and workout. Last fall, Baya even biked alongside me when I pushed the boys while running. When we were biking around the neighborhood together this last weekend, we talked about biking and racing. I told her that I race my bike in triathlons. She said that I will probably beat everyone. That girl sets the bar pretty high. I better not let her down!
Posted by Jayme Wyss at 9:05 PM No comments:

Back in the Saddle

When I announced a hiatus from triathlon, I really thought it would actually be a full retirement. I thought about selling my gear, including my precious bike. I barely touched my race bike for 14 months. I barely did any distance running, and I had no interest in pursuing just running races. I swam twice a week, usually, for fun, but otherwise triathlon felt like a thing of the past. 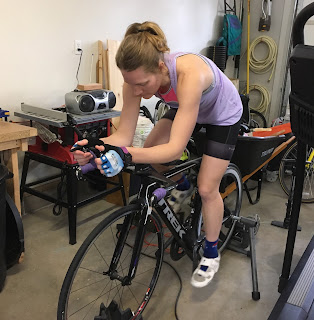 I started running a little more in the fall, but mostly just for the exercise. Then I started adding in some threshold work because it was challenging and made me feel good afterwards. I increased my swimming to three times per week in mid-October. In December, I got my bike set up on the trainer. Getting back on wasn’t so bad. Actually, it was kind of good. I did a few 30 minute rides, just for fun, just to see what kind of watts I could do. A couple weeks in, I did a FTP (Functional Threshold) test, and I was at 200 watts. My last known FTP? In 2013, I was around 209. That was also at a time where I was performing very well. While I strove to match that every year, in reality I don’t think I ever made it back to that level of power. By the end of December, I was eyeing a race. Not just any race. A HALF-IRON DISTANCE race.
I’ve spent the last 2 months gearing up for it. Less than 4 months until race day (June 23rd). I’m planning on it being a “one and done” race for the summer, so I can have more freedom to do fun stuff with the kids, without the obligation of training. The biggest thing – I want to enjoy the process. So far I am loving it! I really never thought I’d feel this way again.
I’ve surpassed training goals already and I’m feeling great! There isn’t any perceived pressure from being sponsored either. One of my first rides back was 2x10’ (5’) @ 190 watts. I’ve already worked up to 4x21’ (1.5’) @ 190 watts (1:24 total at Goal Race Effort)! I wanted to work up to running 4 miles at 7’ (threshold) by the end of February, and I’ve done multiple 5 mile runs at threshold and felt GOOD!
It’s also an emotional journey. “Feeling good” has not been normal for me over the past year. With my hemoglobin, iron, and ferritin having tanked after Rowyn’s birth, it took a long time to come back from that. I struggled to go slow. I struggled to breathe, to move, and I was not myself. As a result, I’m all the more determined, but also overwhelmed with feeling blessed. It has changed my perspective on triathlon. It is now a gift. And what’s even better – I think I can come back and kick some butt.
Posted by Jayme Wyss at 2:31 PM No comments: