After World’s, I took a week completely off to let my mind and body reset and recharge.  After a week, I started running a few days a week, and I also started lifting a couple days a week.  After 3 weeks out of the water, I hit the pool again, and enjoyed it a lot more than what I thought I would, so I would like to continue with that at least a couple days a week, and then take the kids swimming with me afterwards once a week too.  It’s a much more relaxed and enjoyable pace to life.

I didn’t realize the full amount of stress that triathlon had been bringing me until I finally called it quits.  From the moment the race was over, a huge sense of relief came over me.  Having the pressure off from training and competing has been huge.  If I can’t get a workout in one day, it’s not a big deal.  I’ll stay active, but with kids, life interruptions will definitely happen.  I don’t need to stress over it anymore though.
Last weekend, I started having some terrible pain while running.  With Myles, I had a lot of pelvic pain, but this time it seems more like round ligament pain, and it has brought my running to a halt.  I took a week off from running before trying again.  I thought my last attempt at running was going better, until I had to stop and walk after 2 miles.  I competed at 16 weeks of pregnancy, and by 19 weeks, I was in enough pain that I needed breaks during my runs.  I can’t run fast, and I can’t believe how lucky I am to have gotten in a great race so far into my pregnancy before these additional challenges have come up!  Talk about perfect timing! 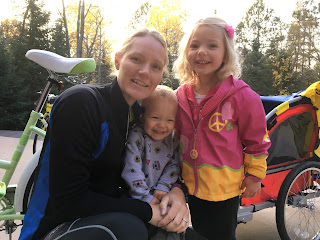 I’m now looking for more alternative options.  I don’t want to ride my trainer indoors, and it gets uncomfortable riding in aero position, so I’m pulling the kids behind my one-speed cruiser for a great family-friendly workout instead.  Advantages?  All pressure is off my belly as I sit upright and feel as prim and proper as Mary Poppins.  I can get in a good leg workout, especially on hills, pulling that weight behind me, and people can ride with me and not get mad at me for going too fast!  I can have company, carry on a conversation, and not lose training buddies.  A definite win.
This winter, I am hoping to get my own set of XC skis, as well as a double chariot to pull the kids, in order to get some fun workouts in over the winter that don’t involve putting myself through pain and misery in an attempt to keep running.  Because let’s be honest, it’s just not worth the self-torture.  I know some people switch to XC skiing completely over the winter to replace running but still achieve similar fitness.  My main goal is to weight lift to get stronger, and then stay in shape so I’m ready to go once track season and the new baby arrives (oh yea, and have FUN doing it!).  So if you know of anybody selling some good used XC ski stuff, let me know!
Posted by Jayme Wyss at 1:13 PM No comments:

What an experience!  We made our way (we walked the mile) to transition before the sun even came up, then watched the sun rise while I set up my transition area and warmed up.  Fortunately, my age group started at 7:08, which would keep at least part of my race in the coolest part of the day (70’s and high humidity).  There was a strong current in the ocean, so they announced our swim would be shortened from 1500 meters to 1,250.  Hearing that, I was nervous.  Despite it being shortened, the current was so intense that it was my slowest Olympic distance swim.  I had to remind myself on the long stretch that, yes, I really was making forward progress.  There were people who were pulled during the swim (not by choice) because of the current.  They were allowed to do the bike and run but since they didn’t finish the swim, they weren’t ranked.  Normally when you get pulled during the swim, you’re just done.  However, some were pulled for pure safety reasons that were outside of their control.  Within one wave, swim times could vary greatly as well because the current could be strong in one area, but if you moved over, even just a little ways, it could be less intense.  I learned all this afterwards.  It was a relief to make it to the turn buoy to head back, and with the current now coming behind me, I was zipping along but already felt exhausted.

It was a long trek to transition, and we had to run up a flight of stairs and back down a ramp.  That would be the biggest elevation change in the entire race!  Most of the bikes from my wave were already gone and just a few remained.  I skipped the flying mount and put on my bike shoes right away since we had to run on a lot of gravel to get out on the road.  The bike was awesome!  I had biked the route three times earlier in the week while training, so I knew just how crazy flat it was, and knew that with less effort, I could still put out a fast ride.  I heard how terribly hot and slow the run was for the sprinters (who only had to run half the distance!), so I knew pacing was key and that it would be smart to keep my effort in check in order to be able to run.  I had so much fun on that ride, and could have handled it being longer!  Flat, fast, and great scenery.  I averaged 22mph with a more moderate effort (and was about 6 minutes faster than Omaha).
The sprint racers said that coming off the bike, nobody could “go”.  I know that feeling from previous races, and I didn’t want this to be like that.  I just wanted to feel good.  I had a watch on, but the time wasn’t going, and I was thankful for that.  I knew I had a slow swim, and a fast bike, but I wanted to run by feel.  If I kept a spring in my step, then no matter the pace, I knew I would be okay, and that it would also be better than Nationals in Omaha.  I started out feeling really good.  It was 2-loops for the run, and I knew the run course well.  If I stayed attentive to the present then I was better off.  There was cloud cover for only the first half of the first loop, and then it was all intense sun.  Some directions, there was very little air movement and the humidity was stifling.  There was no shade, but the aid stations were fairly frequent, and we could get ice, water cups, water pouches, and Gatorade.  If I got Gatorade then I walked while I drank it so I could get it in.  The pouches were awesome for drinking and dumping on you, and I kept refilling the ice in my top. 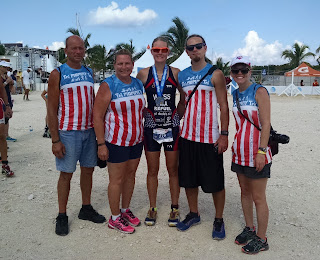 They did a good job in trying to keep you cool.  I still saw athletes dropping during the run though, and my family saw one taken away in the ambulance.  This was seriously no joke.  There were some men who flew past me, but not a ton of women, and I felt like I was doing better than most of them looked!  I encouraged some of the men to try and stay with me, but eventually I usually lost them.  I stayed positive and cruised into the finish line feeling good overall, and almost 2 minutes faster than Omaha (49:56)!  It still wasn’t a fast run compared to what I’ve done in the past, but it was good for this season, and definitely fast for conditions.

I ended up placing 43rd out of 59 in my Age Group – at the WORLD CHAMPIONSHIPS.  I can’t complain.  I’m thankful for this opportunity and the chance to race here as a part of Team USA.  Reflecting back on this experience, looking through the pictures, and reminiscing brings tears to my eyes.  As I have expressed before, this wasn’t just another race.  They call this race the Grand Finale, as it closes out the ITU racing series with the ultimate World Championship, and includes the Age-Group World Championships with it.  It was also my personal Grand Finale.  After a lousy season, and a mostly lousy season last year, I wanted to end on a positive note.  I wanted to enjoy racing triathlon one more time.  I wanted to have fun.  I wanted to feel good about my performance at the end of the day.  This was the Grand Finale to a journey of 6 years, of lots of sweat, tears (literally), frustrations, challenges, and triumph.  It was such an incredible experience, that I would love to be able to relive the whole thing again!
Posted by Jayme Wyss at 7:48 PM No comments: