It's the CAN, not the CAN'T

YOU define your own limits.  You don’t know what you are truly capable of, so quit putting limits on yourself!  I swore I would never run a half-marathon (ran my first at 3 months pregnant), I would never do a half-iron triathlon (have now completed 3), and would NEVER run a marathon, simply because I had zero interest in ever taking on such an undertaking.  As I gained fitness, confidence, and quit telling myself “I can’t,” I began finding out what I COULD do.  I ran my first marathon (and only thus far), alone, and crushed the Boston Qualifying time by almost 15 minutes.  I’m really not lying either when I say I was NOT a runner in the past!  My family can definitely attest to that.
I see things as a challenge now though.  My big off-season challenge this year was actually given to me by my neighbor.  50x50 on 1 minute in the pool – sprints.  Upon first hearing this, my arms already ached just thinking about it.  But I figure I have until the end of February to work my way up to 50 on 1 minute.  So I won’t say, “I can’t,” or “that’s too hard,” instead I can say, “not yet, but I’ll get there.”  So far I’m up to 26x50 on 1-minute, and I aim to hit 50x50 around my 38th week of pregnancy (I’ll be cutting it close!)  So while I can’t run very far or very fast, I CAN swim and I CAN bike.  So I’ll focus on the things that I can do.  We'll also see how long I can squeeze into my one-piece for swimming!
She has also been an inspiration herself.  At my YMCA, we are in the middle of a 100-Mile Swim Challenge.  We have several months to complete it, but my neighbor’s goal was to swim all of it (165,000 yards) before she had her baby (just born on Friday!).  She completed the entire challenge in less than 3 months, which also happened to be her 3rd trimester!  So maybe today there are things that you can’t do, but there are things that you CAN do.  Let’s start there.
The greatest limitations you will have to overcome, are those that you put on yourself.
Posted by Jayme Wyss at 4:43 PM No comments:

When Everything Falls Apart...

Okay, that’s a bit of an exaggeration, but as a whole, pregnancy is definitely not a “sugar and spice and everything nice” type of experience.  I will also readily acknowledge that many women have much tougher pregnancies than I have, and I feel for them.  Even an “easy” pregnancy is rough enough.  Lately it’s been a case of everything bad happening at the same time, so I thought I’d share some of the struggles that I’ve been facing recently.

1)    The pelvic pain started up again about a couple weeks ago.  Since then, my pace has significantly dropped off, and I discovered that my weekly 6 mile long run was also too much.  For the most part the pain is manageable and not always even apparent, but it definitely affects the run.  The upside is that this time around it took a few weeks longer to come on, and I credit regular chiropractic care with Timber Land Chiropractic!
2)    I had an infection with swelling so painful that it hurt to sit, stand, or walk for a full day or more.  I took Sunday off, missing a key ride, and I could hardly sleep the night before.
3)    On Sunday I also experienced very sharp abdominal pain along the top of the uterus.  It’s happened a couple times before but it always went away quickly.  This time it lasted a lot longer, and was super intense (immobilizing even) that brought me to tears both times.  I was told that it was most likely just ligaments being stretched, but I never experienced this kind of pain in my first pregnancy, which made it scary at the time.
4)    Over the past week or so, Baya has been going through a bad sleeping phase.  Normally we lay her down awake, she puts herself to sleep, and she usually wakes up happily and can hang out in her crib for a while even.  With this phase she decided to suddenly not be able to do those things.  She would stand up and start scream crying as soon as we put her down, and could do so off and on for more than an hour.  She would also wake up in this same fashion, whether that be in the morning or in the middle of the night.  And so a few nights we were up for 2-2.5 hours in the middle of the night, with her getting up and crying every 15-20 minutes.  We’ve been exhausted, and I also became sick from the lack of sleep – with a low-grade fever, chills, feeling weak and like I could throw up…
5)    Which leads me into the final part of heartburn.  With both pregnancies I’ve had bad heartburn.  Some nights I’ve had to prop myself up to try to sleep (it’s worse when laying horizontal).  Sunday night I actually threw up a little in my mouth during the night, and I felt sick the rest of the night, and then entire next day.  Not sure if this was heartburn or sickness at this point.  I tried to swim on Monday but I couldn’t do it – I spent half of the time leaning over the gutter thinking I might actually throw up.
Each of these things by themselves may not be all that bad, but when they all happen at once, it makes for some rough times!  Then with all of the snow (we’ve received well over a foot already), ice, and cold, and then the pelvic pain on top of it, I have lost almost all motivation for any running.  With my first pregnancy, the Y that I worked at had a running track that was only 12 laps for a mile.  I ran on that for the majority of my pregnancy.  This time, my Y’s running track is much smaller with super tight turns (18 laps for a mile).  I hate the treadmill (especially since it now takes me even LONGER to reach 1 mile!), so I’m now mixing it up between the two.  It’s better to suffer through a few runs per week still then to quit and have to get back into it again from scratch post-delivery.  I guess that makes it the lesser of two evils?  It’s really all about setting myself up well to come back post-pregnancy.
I guess all you can do is take some time to recover and then push ahead again, trusting that the setbacks are just temporary.  It can actually be a healthy mini-break (despite also being frustrating in the meantime).  Here’s to getting back at it (and hopefully some more restful nights again while we can)!
Posted by Jayme Wyss at 9:44 PM No comments:

The changes keep on coming, and you have to be prepared to adapt. While the pelvic pain hasn’t returned, the running has really started to slow anyway.   Some days feel better than others, but overall it has become a lot more uncomfortable and slower.  Some runs, I may still bundle up Baya to take with me, but it’s gotten pretty cold, and I won’t take her out in rain either.  I’m also trying to prolong the inevitable switch to the treadmill for as long as possible as well.  I want to keep the joy in running for as long as I can.

Last weekend I was still going out for an outdoor ride on the bike – 26 miles with some hard intervals mixed in.  Post-season I was regularly getting in a weekly outdoor 30-mile ride on the weekends, but I learned I even had to adapt with that.  There comes a point in pregnancy when you just can’t make it that long without a pit stop.  You learn to stay on the lookout for a good stopping stop and have to remember to pack tissues to have along with you.  Sometimes it’s just about making the uncomfortable-ness as comfortable as possible.  It has also gotten more cramped down in the aero position on the bike, so there are definitely some benefits to riding indoors on the trainer: sitting more upright and having a bathroom nearby.
Halloween morning, we woke up to at least 3” of snow on the ground.  This was the third snowfall in October up here, but the first that accumulated.  It’s Sunday and there’s still snow out there.  It’s been too cold to melt it all, though I do expect it to all disappear before the next snowfall (which forecasts have that as late this week again already).  I guess we have moved into winter (we did have a solid 4.5 months without any snowfall, so there’s that….).  While Draft Cyclery has provided some awesome cold-weather apparel for getting outside on rides, there’s a good chance I may be retired to the indoors until spring.  I get tired of spinning on the trainer so much, but the risk of hitting ice out on the roads is currently too high.  So there’s that, and as I said earlier, I at least have a bathroom nearby and can ride more upright when indoors (though yes, I do realize you should always train in aero whenever possible).  Stay positive.  Keep healthy, and keep moving! 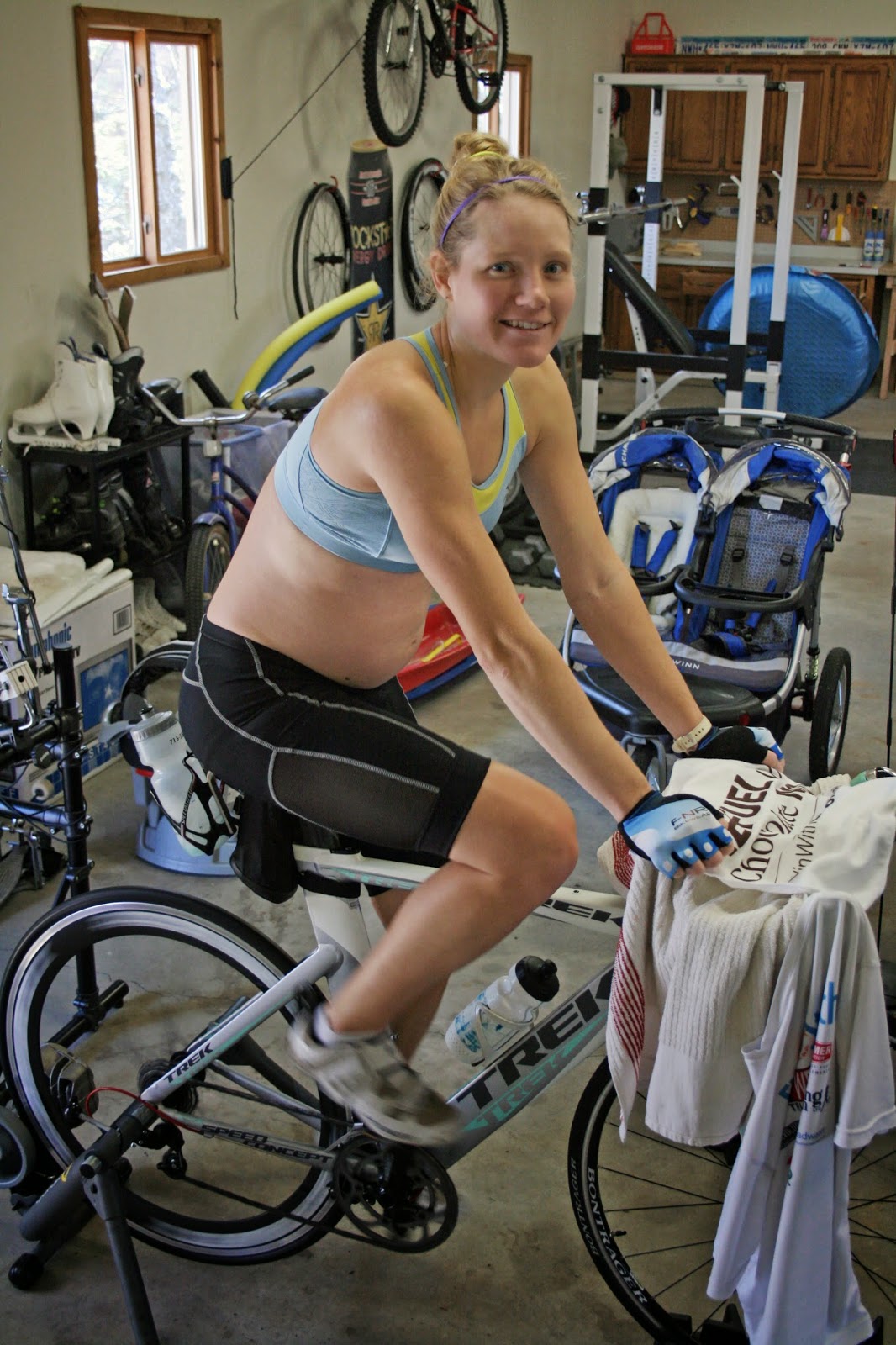 What I love about riding indoors in the winter is that I get to do it in a cold garage!  It can be 45 degrees in there, but I can still work up a sweat.  Not pictured is the fan I also keep next to me.  Staying cool and staying hydrated.  Here’s a full-out belly picture at 5 months (22 weeks) of pregnancy:
Posted by Jayme Wyss at 1:14 PM No comments: