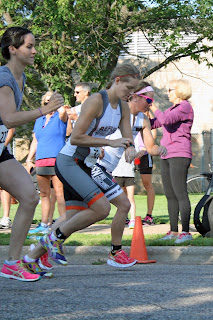 I decided to add the Point Duathlon to the schedule after I was finally seeing improvement on my run and having fun again.  Back in 2012, it was my first overall win, after which I also picked up Draft Cyclery as my first sponsor.  Taking time to recover after Nationals, and then attempting to squeeze everything in as we had our first week of volleyball practices, meant that this race was definitely meant to be just for fun!
The kiddos made the trip down with us for this race – the only one this season that we planned to bring them along with us.  Despite it being an early morning wake-up, both kids had great attitudes and were awesome little fans!  The day was sunny, windy, and warm, so it was perfect for spending it outside too.
Toeing the start line, I was still nervous, as I lined up next to Bridget Witt.  She specializes in duathlons, and I’ve gone up against her a couple times before.  She took 2nd to me at the 2012 Point Duathon, and then again at the 2013 Weston Duathlon.  I knew she would be good competition and it’d be a tough day.  The first run was just over 2 miles, and I averaged around 6:51/mile, which I felt good about.  Bridget stayed hot on my heels and we had 3 women ahead of us going into T1.  It wasn’t long and Bridget passed me on the bike.  She spent the last 2 years focused on the bike, and it paid off for her, as she put some good distance between us. 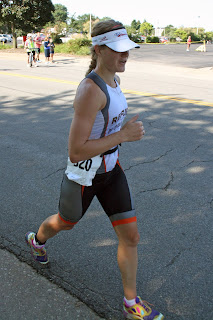 It was a short 16.5 mile bike ride and we were off and running another 2 miles to the finish line.  My second run averaged 7:14/mile, and while I was hoping to be able to make it a little faster, where I really needed to make up time was on the bike, where I had lost a minute to Bridget.  I came in 2nd behind her by just under a minute, and 9th overall including the men – not too shabby!
While I’ve gotten closer to getting my run speed back after focusing on it for four weeks, I’m still about 20 watts slower on the bike than where I was as recently as May.  While it pains me to think where I could have been in that race if I could have put down 20 more watts, I also can also appreciate having lost to Bridget.  I know what it takes to win a race like that, and I know this hasn’t been my season.  I’m just not where I need to be in order to bring home the W right now.  My takeaways?  I have 4 weeks until the World Championships in Chicago and it is obvious that I need to spend it focusing on the bike.  Also, I’m looking forward to next season when I come back stronger than ever and kick some butt again!  Lastly, thanks goes out to Andy, for not only taking great pictures (as always), but for herding the troops while doing it so they could watch mommy race! 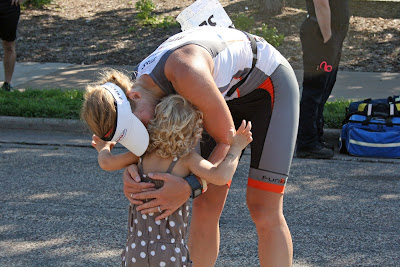 Posted by Jayme Wyss at 3:17 PM No comments:

I had one ultimate goal going into USAT Nationals – to qualify for Team USA headed for the 2016 World Championships in Cozumel, Mexico.  The season thus far had largely been a disappointment, but in the final weeks and days leading up to Nationals, I was starting to feel ready.  I knew I wasn’t where I should be, but I was getting darn close.  I was finally starting to feel like my old racing self.  I knew it would be tough to make the Top 18 in my age group to qualify, but I also believed I had a shot.  I had to put together a strong race.  Last year, I had a strong performance and was 17th in my age group.  Perhaps it was a long shot, but I was ready to give it all I had.

I had transition set up right before it closed, and then had an hour and a half to wait until my wave started.  I warmed up, put on my wetsuit and headed down to the water.  I misjudged the time I had, and realized that my wave had already warmed up and were climbing back out to go over to the starting area.  I jumped in, and when I felt the COLD 65 degree water, I was okay with having missed out on spending extra time in the water.  I climbed back out and walked to where my wave was jumping in.  We had to start lined up with one hand on the dock this year (versus 10m out in a group).  It was a crazy start, with lots of hitting and kicking one another.  My age group had grown from 128 last year to 141 this year.

By time I was done with the swim, my hands and feet had gone numb from the cold temperatures.  My swim was 23 seconds slower this year, but still a good time, right around 25 minutes.  I was 42nd out of the water last year, but 70th this year.  I had some major ground to make up.  The start of the bike was fast and I felt good.  Unfortunately, I wasn’t able to keep up the pace, and I wasn’t gaining as much time on others as I needed to.  Despite the lower watts on the bike, I wasn’t far off from my time last year.  I still added another 47 seconds on to my bike split though.  A few extra seconds added to both transition times as well, and I knew going out on to the run that it would be tough to get under my goal time of 2:20.
I started surprisingly strong on the run and hit the first mile at a 7 minute pace.  I tried to go for the feel of my pace on my track workouts, to be smooth and constantly pushing.  It’s tough to be in that focused of a mindset for over 6 miles though.  My pace slowed for the next 2 miles to around 7:12/mile.  I reassured myself that I had it in me – to hold on, to keep pushing, to lay it all out on the line and have zero regrets.  A few women in my age group passed me, and I passed a few others.  I finished the 10K run a mere 39 seconds slower than last year.  I phrase it that way because of how much I have struggled this season.  This was by far my best triathlon performance this season, and less than 2 minutes off from last year! 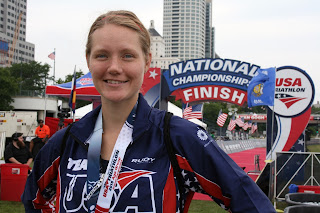 My finishing time was 2:20:24, and I ended up 27th in my 25-29 current age group.  Here’s where it gets interesting though… My age for this 2015 race season is 29 because that is how old I am on December 31st of this year.  Next year I will turn 30, and compete in the 30-34 age group.  While I placed 27th in my crazy, super fast age group for Nationals this year, for 2016 Team USA purposes (this year’s Nationals qualifies for next year’s World Championships), I “age up” to the next age group.  Plugging my finishing time into the 30-34 age group times, after everyone “ages up”, I should be sitting around 13th!  The Top 18 qualify for Team USA for the 2016 World Championships in Cozumel, Mexico!  I accomplished what I had set out to do.  I never would have thought that getting older could be this exciting – we’re headed to Cozumel!
Posted by Jayme Wyss at 12:37 PM 1 comment:

Why I Still Tri

It wasn’t just a couple frustrating races early on in my season - it’s been frustrating training for the past 2 months as well.  I’ve gotten down on myself.  I wasn’t having fun anymore.  I hated my bike.  Yup, it was so bad that I hated my new, beautiful speed demon of a bike.  I hated running.  I was going through the motions without the heart.  After I switched from the half to the sprint at Chisago Lakes, things started to improve.  A huge amount of stress was lifted off of me.  I had more manageable distances to train for, and I have become better focused on Nationals.  Andy and I started sharing night duties with Myles.

The sprint race was fun.  I didn’t need to win it.  I needed to enjoy the journey again.  Then the Tuesday night after, I went out to the track for a quality run workout.  Unsure of what I could handle just two days post-race, I was mentally flexible with what my workout would be and planned to adapt based on how I was feeling (instead of getting frustrated for not meeting set goals or expectations).  At the very least, I’d do a fartlek run based on effort, not pace.  I decided to go for the threshold and repeat workout since I was at a track.  My goal was to run 3-4 miles at 7:10/mile pace and run 4x200m repeats after.  I ran 4 miles at 6:59 pace and felt surprisingly GOOD like I could have kept going if time allowed.  I ran my first 200 and it felt almost too easy, so I held my pace longer and ran a 300m, and then I did a 400, all faster than pace and I still felt great.  Killed it.  Then with my most recent hard brick session, I ran 3 miles way faster than I did at the Chisago Lakes sprint.  The focus on the run is finally paying off. 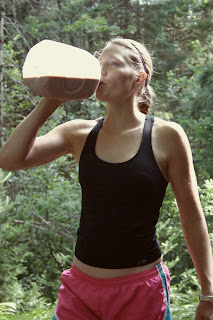 I have struggled through so many training sessions lately, or been frustrated when things haven’t gone as planned and I miss a workout, or have to compromise what I planned to do.  Then I have workouts like those, and I have to remind myself to let the frustrations slip away and to focus on what I know I am capable of, what I have accomplished, and to trust my training.  As much as I don’t feel ready for Nationals, I also know that I AM ready.
In mid-July, I was tempted to walk away from triathlon completely.  I was burned out.  I have been tired to the point where I have felt physically ill.  Then I have a run night like Tuesday night and I am reminded that this is why I still tri – to discover that I’m capable of far more than I give myself credit for.  In a valley?  Keep pushing and you’ll eventually find your breakthrough.  Ready or not, I’ll lay it all out on the line and give it my all at Nationals.  When I get to that run, I can be confident that my legs are capable, and let my heart carry me to the finish (and maybe have the theme song from Rocky playing in my head).
Posted by Jayme Wyss at 9:27 PM No comments: