Swimming.  I’ve essentially been doing the same thing week after week, year after year.  The volume and intervals change a bit depending on where I am in the season, but I hit a plateau and it has gotten frustrating.  The 50x50 on 1’ sprint challenge was good to shake things up a little, but not good enough.  Post-pregnancy, I basically returned to the same old thing.  I did threshold sets twice/week of different distances, but short recoveries (100s, 200s, and 300s are the most common).  And then I do a speed set of either 50s or 100s once/ week as well.  If I get crazy, I may do a ladder for something different.  But my speed hasn’t continued to improve and the workouts have become mundane.
I am now one of those people using the workouts out of a binder at the end of my swim lane.  And you know what – I LOVE it!  It’s the change I’ve needed.  So for the month of May I have been sticking 100% to these workouts and then I’ll do a repeat of the test set I did at the beginning of the month to see how far I’ve come.  I can already tell you that I’ve been noticing improvement.  These workouts are based on your pace that is established by an initial test set, and then pushes you to hit that pace (and sometimes faster!) at different points in the workout.  It also frequently has short, fast sprints at the end of a workout as well.  These tough workouts have pushed me in all new ways.  It has left me exhausted and has even kicked my butt when I couldn’t reach sub-pace one of the days.  I have swum intervals faster than what I thought I could in a workout, and while I’m sticking to 3 days/week for a while, it has increased my volume of each swim as well.  Sometimes you have to play mental games to get through it, but afterwards you feel like you have reached a higher level of swimming.  I finally feel stronger and faster in the water, and I hope it shows on race day!
Biking.  I used to do a lot of the same repetitive sets (much like with swimming), but I’ve been mixing it up a lot more this past winter and spring.  I have new favorite workouts that push me in all new ways.  I was settling before.  Being that I train with power, I know what watts I need to be pushing for different sets.  I have been completing tougher sets this year and I’m excited to see what kind of watts I will be able to put out at races.  I also had some adjustments done to my fit on the bike, and I could immediately tell a difference in my speed - thank you Mel's Trading Post!  On top of all that, I also am now riding my 7.5 Series Trek Speed Concept and I am BLOWN AWAY by the amazing speed that machine has!  Even on a super windy day, I have been able to blast through the miles.  I am better positioned, riding a faster bike, and have been turning out higher quality workouts. A fast training ride has been around 20mph, and last year I was racing around 22.5mph.  My last training ride I averaged 23mph!  (Granted, I was hammering for the vast majority of it, but still.) To say the least, I’m just a little excited to see what I can do this season… (And now I better be able to bike at least that fast in races!)
So if you’re stuck in a rut or have hit a plateau in your training or racing, don’t be afraid to shake things up!  Some crazy things might just happen.
Posted by Jayme Wyss at 10:24 PM No comments:

How Mommyhood Makes Me a Better Triathlete 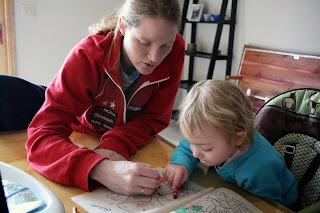 Kids may push all your buttons sometimes, but they can also make you be a better person too.  I think that I am also a better triathlete because of them.  Sure I may not have as much time to train as I’d like, or fit everything in very well, but here are some ways that they DO make me better…


Don’t think you can’t do something because you are a mom.  There’s a good chance you may actually be able to do it better!
Posted by Jayme Wyss at 5:39 PM No comments:

I signed up for this thing before I had Myles, back when I was feeling optimistic that I would have him sooner, and that I would make a swift and awesome return to running after his birth, just as I had with Baya.  My 5K 2 months after having Baya, I ended up PR’ing by 30 seconds!  This one ended up about a week sooner after having Myles, and I have been struggling with my running most of this time.  I have felt restricted in my movement within my hips and have dealt with some pain along the way as well.  Extreme enough pain early on that I had to keep postponing running altogether. 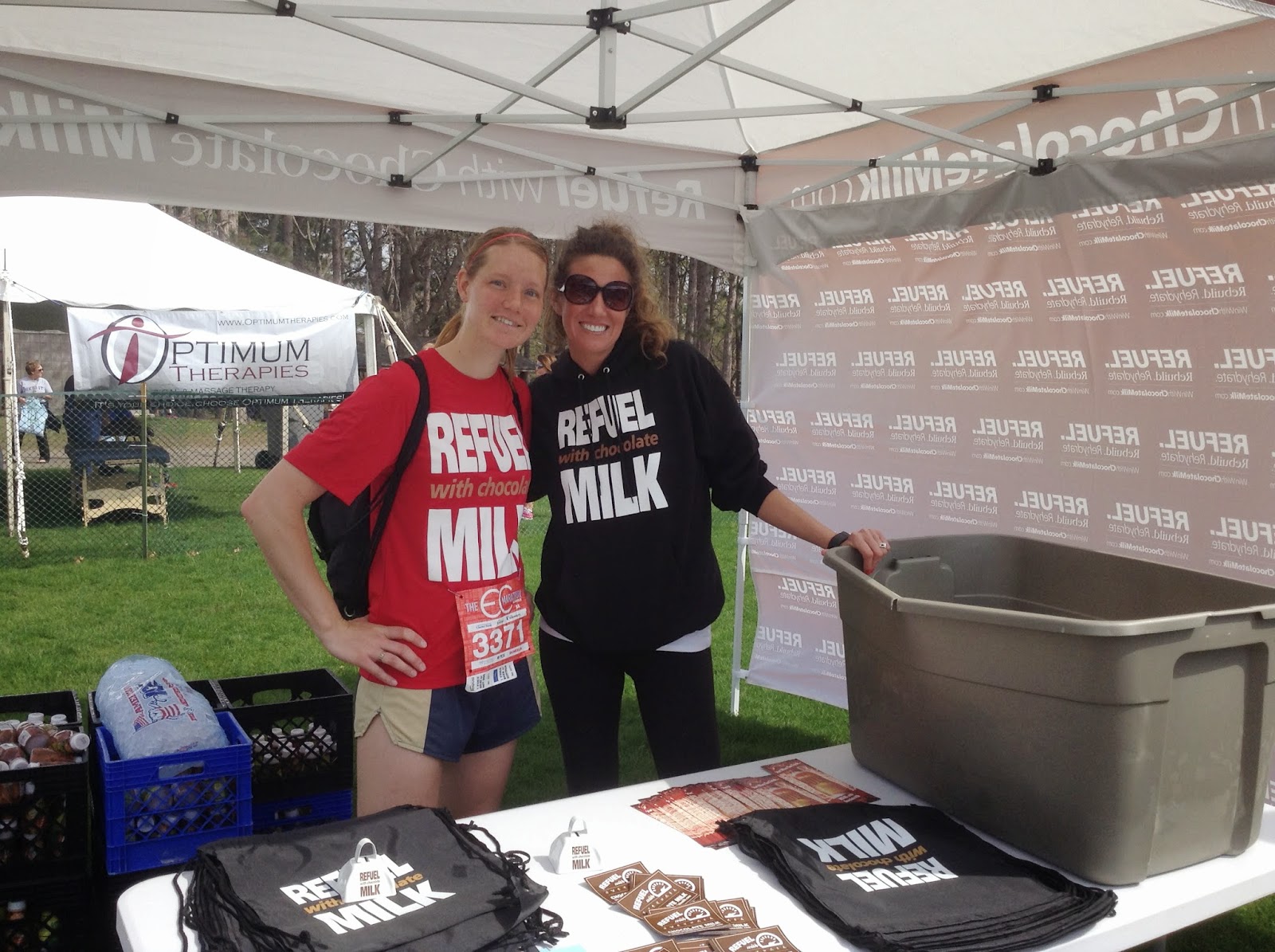 I have wanted to break 20 minutes for my 5K time ever since I set that PR of 20:14 after having Baya (I tied it last year).  I knew I wasn’t ready for that kind of race result at this point yet, so I lowered my expectations and tried to take some pressure off of myself.  The course had 2 GIANT uphills and only one downhill.  It was ridiculously hot for May and very sunny.  It was the toughest 5K course I’ve ever done – definitely not a PR course.
I recently came down sick – either a cold or new allergies, and the night prior to the 5K wasn’t much for sleeping either (or the last several for that matter).  If I had any ounce of hope for a PR left even though I was feeling crappy and we had missed out on time for a proper warm-up, it certainly disappeared during that first hill.  My goal became to win it (and be under 22 minutes at the very least).  There was a prize of $50 for the top male and female 5K finishers.  I did end up taking the win and making it under 22 minutes, but it was a far cry from my PR.  It was a frustrating and disheartening experience for sure.  The same goes for Andy, who was also hoping it’d be a chance to PR, only to discover this was not the course or day for it. 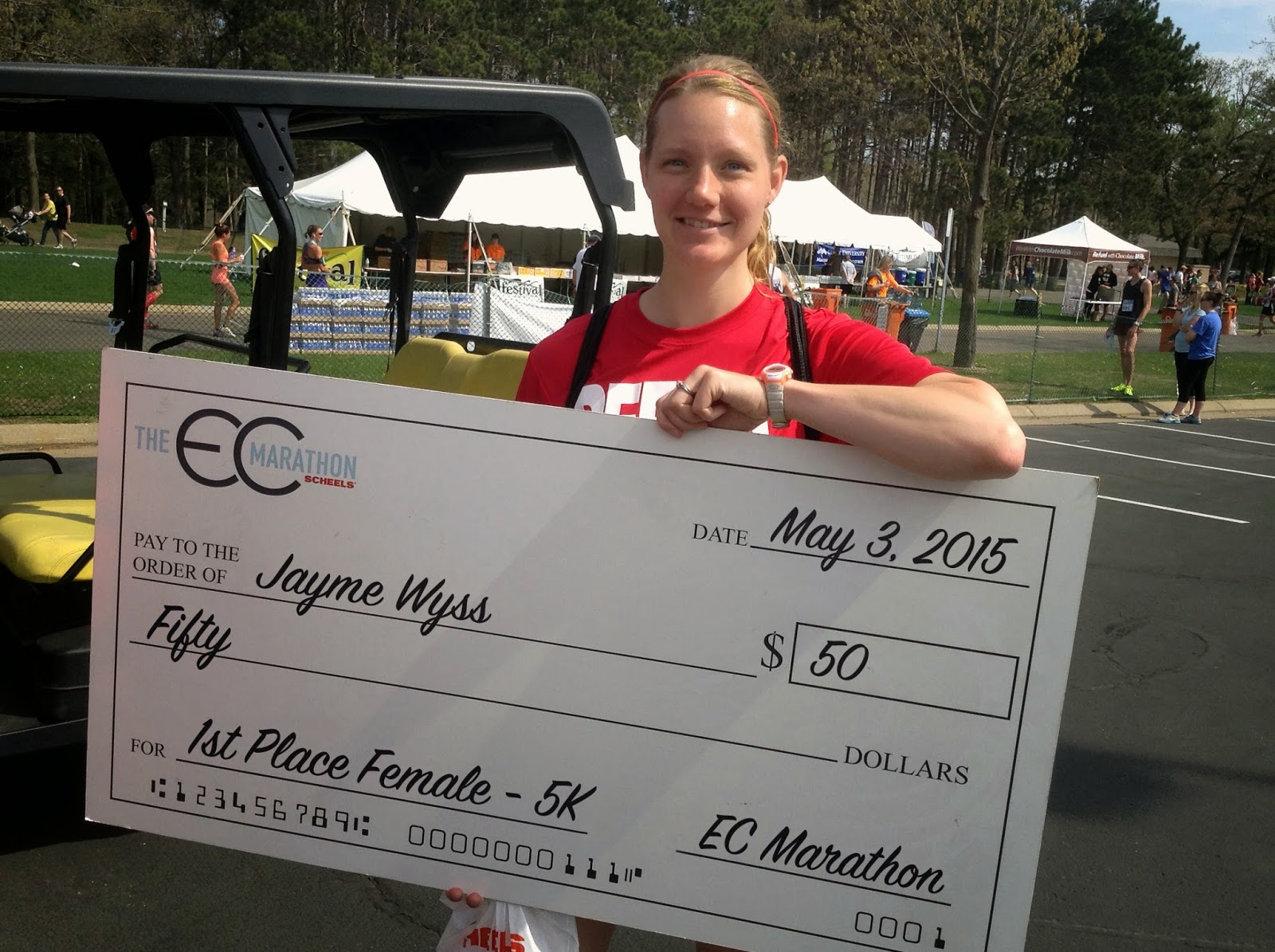 Some cool things though - the chocolate milk team was at the finish line handing out chocolate milk and as well as various other giveaways, and I also got to hold one of those giant checks since I won!  Now I’m anxious for the triathlon season to start so I can get some swim and bike in as well in a race (which I’ll hopefully prove to have made a better comeback with!).  I know I’ve got lots of work ahead of me yet though!
Posted by Jayme Wyss at 9:46 PM No comments: