Competing on the World Stage

This was my first time competing for Team USA at a World Championship event, and what an honor and neat experience it was!  Weather played a factor in the schedule of events, as forecasted rains pushed back the bike check-in until the morning of, and the day before the race we were also told that disc wheels would not be allowed.  I have disc covers that I hadn’t put on yet, so I left them off.  Others, however, were presumably scrambling to come up with a non-disc wheel if that is all they had flown in with.  Morning came and it ended up that discs were allowed, but I went without anyway and was fine with that.  There was also a wave warning for the open beaches for 5-8 foot waves.  We swam in a harbor area, and while we were able to complete the entire swim, later wave starts were apparently only allowed to do half of the swim.
My wave did not start until around 10:30, so I had a low stress morning.  We were unable to get in the water for any type of swim warm-up, but jumping into Lake Michigan this time was less of a shock than at Nationals.  Water temp was estimated around 67 degrees, which is chilly but doesn’t numb you so much.  We barely all got in and the horn was blown to start.  Usually I position myself at the front and this time it all happened so fast that I was a couple rows back and had to keep my face out of the water for the first several strokes so I wouldn’t get kicked in the face.  The first half of the swim seemed fine, but then at one point I felt myself being pulled out, and then later I was pushed in close to the wall.  Confused why I was left on my own swimming, I later discovered that others had stayed in a straighter line and out farther.  I also slipped on the steps coming out, and with the extra yardage from my lack of being able to swim straight, I had a slower swim than what I was hoping for.

It was a long run to transition, which at one time was nice grass, but due to the rains and high traffic volume, it was now a lot of sand and mud to run through.  The bike was a two-loop course, and the majority of it was through tunneled roadways – very cool!  It was definitely a highly technical course though, as there was not only a lot of turns, but a lot of U-Turns that were speed-killers.  The bike course was my favorite part of the race (and also where I ranked the highest), so it was unfortunate that the route was about 2 miles short.  We also had to dismount and run our bikes all the way around the huge transition area before going in and through and out on the run.  The run consisted of 3.5 laps, which was long and straight on the same road.  The only interesting part was running around Buckingham Fountain for each lap, otherwise it was rather monotonous.  I watched my pace slip, and speedsters passed by.  Occasionally, I’d pass someone, but overall it was a very self-defeating feeling as I struggled through it.  Hoping for a 7:10 pace, I instead averaged 7:30.  On the final loop before going around Buckingham Fountain to the finish line, we were to grab a small American flag to take with us to the finish.  Later I found out that the run was at least a third of a mile long!
While my times were not quite what I hoped they would be, it was still a pretty incredible experience to race for Team USA as an amateur at the Age Group World Championships.  There were so many countries represented and it was fun to be racing alongside them, with all of us in our country’s race kits: USA, MEX, CAN, GBR, AUS, NZL, BRA, JPN, BAR, SWE, FRN, HUN, (just to list a few).  A man from Great Britain passed me on the bike and said, “Nice job, USA.”  It’s a neat feeling hearing those words!  I also leap frogged with a Canadian woman on the bike and she found me after the race and her speech was heavily accented.  When I shook a Japanese woman’s hand, she bowed to me - things I wouldn’t normally expect to experience at a triathlon.  At the swim start when we were all in our wetsuits, I didn’t know whom I could make conversation with, as I didn’t know who spoke English!
All in all, it was awesome being a part of it.  I’m also glad that my first experience of the World Championships was relatively local.  Next year I’ll be looking for faster times at the World Championships as it moves to Cozumel, Mexico!  Guess I better brush up on my Spanish this off-season! 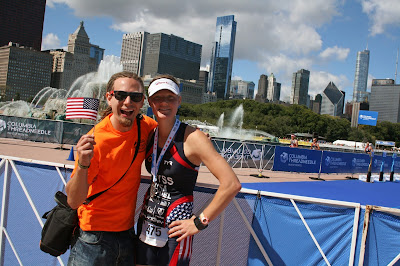 Posted by Jayme Wyss at 5:52 PM No comments:

Speed bumps force you to slow down, whether you like it or not.  I’m in the final push leading up to Chicago next weekend, and this has been the most extended multisport season ever for me by 4 weeks.  With the volleyball season well underway (I’m the Head Coach), time has become even more limited and my windows of opportunity have become increasingly smaller.  I’m stuck on the trainer indoors during the week, but Myles isn’t the most cooperative in letting me get it done during the time that is supposed to be for naps for both kids.  I’ve been doing plenty of trainer rides from 8-9pm at night in order to just get them done, which is 1) not exactly something I want to be doing at that time of night, and 2) not at all an option on game nights. 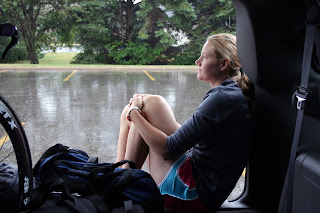 I’ve squeezed in runs during breaks at volleyball tournaments or during JV warm-ups, and even did my 9-mile run after practice one night, which got me home just in time to get the kids to bed.  I had an 8-mile run that gave me the worst blister I’ve ever had, and I wasn’t able to run for a few days without bleeding or pain.  While I could dwell on everything I’ve missed or compromised and feel unprepared for the upcoming World Championships, I also feel really good about being able to nail my quality workouts recently.  I tell myself that speed bumps may also just be a blessing in disguise. 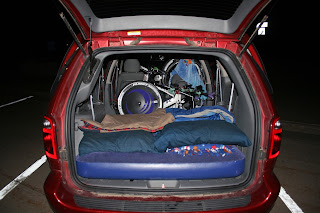 With kids, you learn how to be flexible pretty fast.  When our lodging in Milwaukee for Nationals fell through the week of the race, and EVERYTHING was booked, we made do, even though it meant sleeping on a church floor the night before the race.  Almost in disbelief that absolutely every hotel or Bed and Breakfast in the state would be booked, we drove for hours on Saturday night, making numerous stops, only to end up sleeping in the back of the van at a wayside.  Fortunately we were able to pick up some ice from McDonald’s (gas stations were all closed at that point) to put in the cooler with the breast milk I had been pumping all weekend – no way was that going to be wasted!  Sometimes you just have to make do with what you have and make the most of it.  You can choose to laugh or cry.  Always choose to laugh. 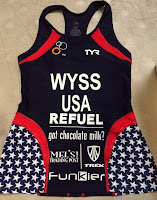 There will be 87 fast women from all over the world competing in my age group at the World Championships next weekend in Chicago.  The Lake is predicted to be 60-65 degrees (colder than the numbing waters at Nationals).  There have definitely been a lot of ups and downs this season, and a ton of challenges leading up to this point.  No matter how it shakes out, I plan to enjoy the journey and the experience.  And who knows, maybe it’ll be one of my best performances yet.
Posted by Jayme Wyss at 8:52 PM 2 comments: