Back when I was in high school, I remember being told that running was 80% mental.  I had a hard time believing that.  Running wasn’t ever easy, or natural for me.  I was too slow for sprints or distance.  I preferred field events when it came to track, and I would run on my own a little, but usually just 2-3 miles.  During my early years in college, I ran my first 10K with my sister.  I think I had made my way up to running 5 miles as my longest run before it, and I always had an incredibly hard time running any faster than a 10 minute pace.  The 10K took me more than an hour to finish, and my sister went slow with me so I wouldn't finish last alone.  Running did not feel 80% mental.  It felt 100% physical and I was terrible at it.
There have been many times though, whether it be in a race or in training, that it can become a matter of mind over body.  To keep pushing, day after day, workout after workout, takes a lot of discipline.  But I do not give myself the option.  It is not about whether I feel like getting in the pool today, or running hard, or pushing my legs on the bike until they burn treacherously.  My body doesn’t always feel like doing these things, but usually I can mentally push myself through it anyway.  It also seems that sports psychology has become more prevalent, or at least more apparent to me.  It was only slightly talked about in high school (where the whole “running is 80% mental” was heard), but I don’t remember being taught how to use this powerful tool.  Now I’ve been reading about it all over the place it seems, and I have my own mantras I use when I’m out on the course that have helped me to push through.
There are a couple things that I like to remind myself of when I don’t feel like putting in a tough session (simply because tough usually doesn’t feel very good).  First, I remember my competition that I want to beat this season.  There are some fierce competitors out there, and if I want to close the gap on them, then I have a lot of work to do.  Second, I remind myself that I do this because it is FUN!  That’s why I fell in love with triathlon.  Tommy Bolin said, “If you’re not having fun, it’s not worth doing.”  It doesn’t mean that we don’t have to do all the stuff that isn’t fun, cause there’s certainly plenty of that in life.  However, if I’m choosing to pursue triathlon by pouring so much time and energy into it, then I better be having fun! 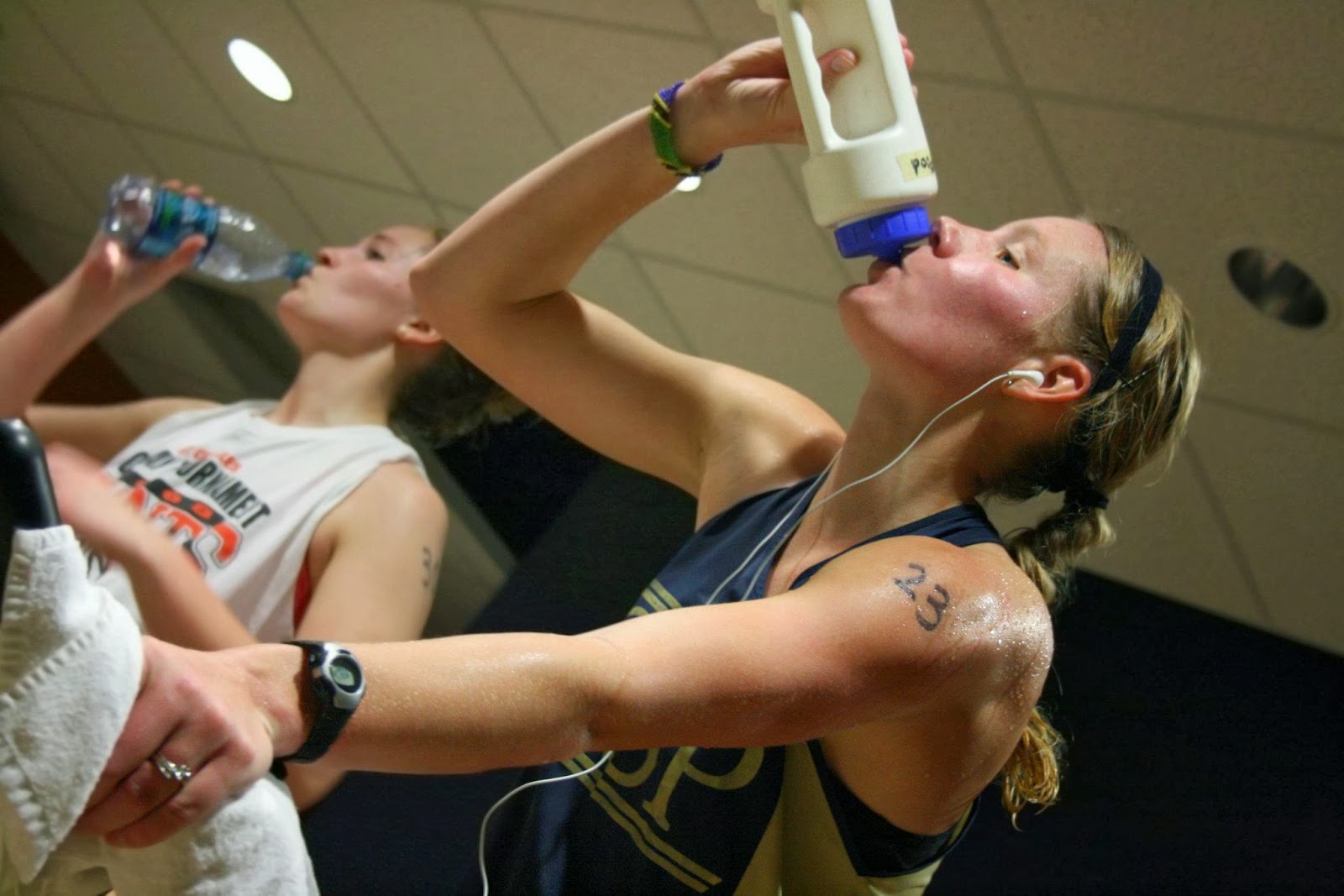 There are also times when I feel like it becomes a matter of body over mind.  Baya has had an ear infection, and it has left me tired and exhausted.  I can handle the fatigue and exhaustion of training much easier than the sleep deprivation that can occur when your kid is sick!  My body is indeed exhausted.  When I got on my bike the other day, I felt more like taking a nap than pushing hard for two-20 minute intervals.  So I told myself to just go for the minimum watts for the set (187).  But after I got into the first interval, I realized I could go harder than that.  Soon I was nearing my highest watt number for a set like this, and then I surpassed it by time the first 20 minutes were up, hitting 200 watts.  My second set I ended up hitting 201.  Mentally, I was not there before I got on the bike, or even when I was warming up, but I had it in me, and my body knew it.  Sometimes, we can surprise ourselves like that.
It is the mind that lets self-doubt creep in, and it is the mind that puts the biggest limitations on our bodies.  I remember when I ran my first 5K after having Baya.  The 5K should NEVER be belittled or looked down on as a “beginner’s race”.  It is a tough race, and I felt like every system in my body was being completely taxed.  It felt downright awful.  While running, I thought to myself, “And why do I like this?!”  Then I finished with a 20:14, breaking my PR by 30 seconds and thinking, “I LOVE this!”
There are of course some days that I need to adapt my training plan for the day because of what is best for both my mind and my body.  I have learned to not be too rigid, especially because having a kid means you have to be willing to be flexible.  But more often than not, when we think we can’t push anymore, it’s then that we can discover we still got a little bit more left to give.  That’s when big things happen.
Posted by Jayme Wyss at 7:49 PM No comments: 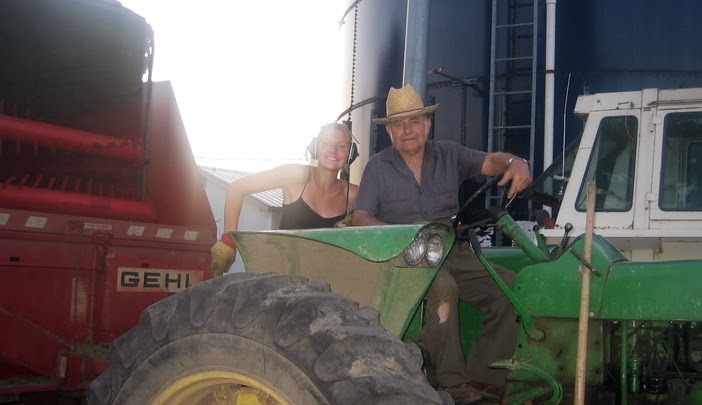 As a born and raised Wisconsin dairy farm girl, I have a love and appreciation of milk, dairy, and farming.  I did farm chores from as young as I can remember: feeding calves, picking rock, and driving tractor while baling hay.  Of course I also had endless hours of fun building forts with bales in the haymow, or out in the woods, playing with kitties, and swimming in our river.  I worked full-time for my Dad on the farm during the summers of my college years before I got married (Grandpa and I unloaded the last wagon of haylage just three days before I got married – had to get the hay off in time!).  I guess you can say that I’ll always be a farm girl at heart. 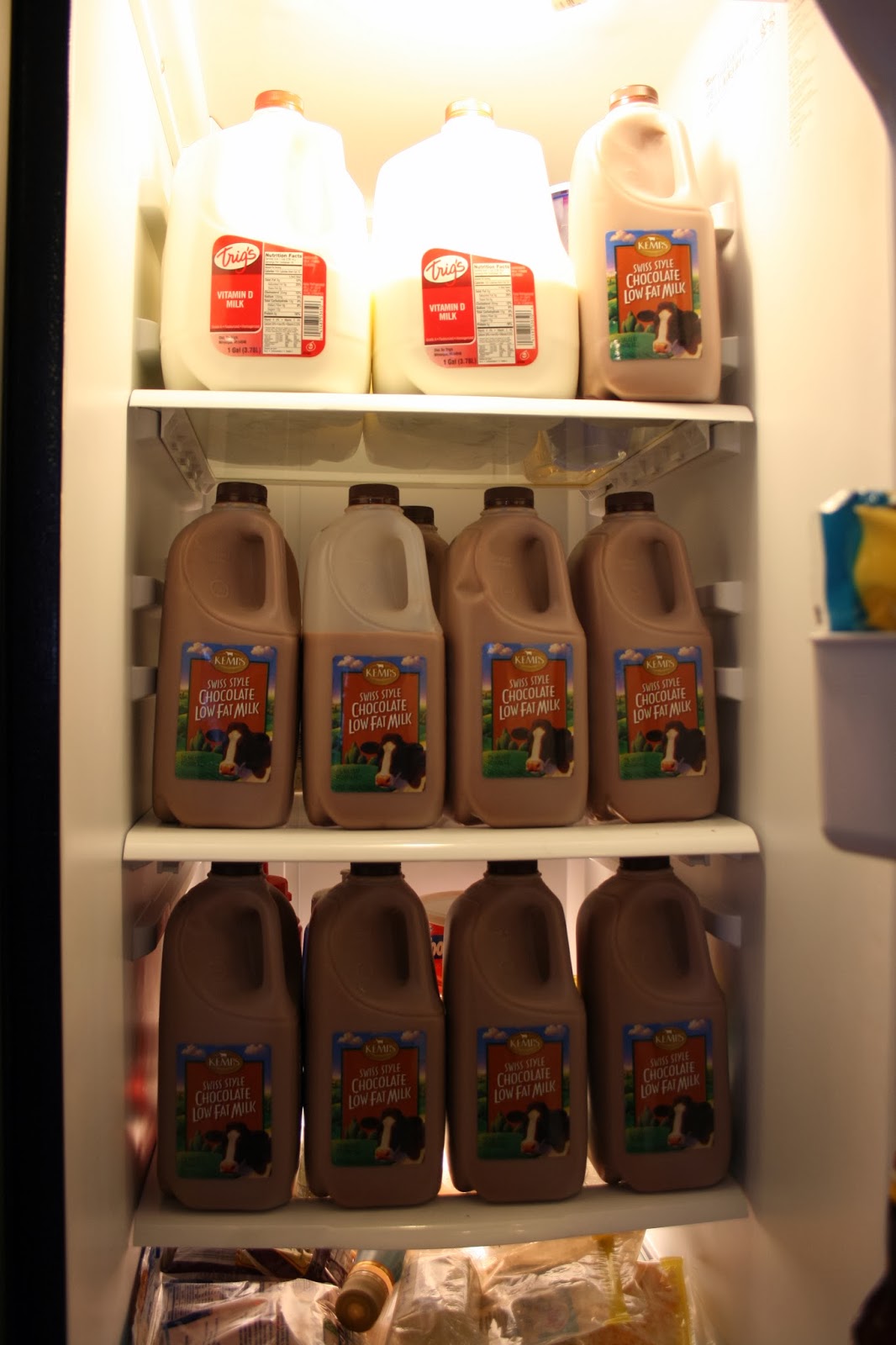 If you look in our fridge, you may find a very large dairy supply in there.  We absolutely love cheese, yogurt, ice cream (which was possibly also the first “solid” food I ever had as a baby), and milk (specifically chocolate milk, which we need to load up on whenever there is a sale).  Since we’ve added a third milk drinker to the family, we now are usually well stocked in both white and chocolate milk, and have even had as much as nine gallons of milk in our fridge at one time!
Chocolate milk is also great for an athlete to have on hand for refueling purposes.  Without proper recovery, the body cannot fully reap the benefits from a hard workout.  Recovery starts with post-workout nutrition.  Lucky for me, low fat chocolate milk is actually one of the best sports recovery beverages available.  After a hard workout, you should eat within 30 minutes a mixture of carbohydrates and proteins.  Chocolate milk does just that: it helps you refuel with the ideal combination of carbohydrates and proteins that will help muscles repair and rebuild.  It also helps the body rehydrate, as it replaces electrolytes with nutrients that are naturally available in chocolate milk: potassium, sodium, and magnesium.  The body is also able to absorb all those nutrients the easiest via liquid fuel like low fat chocolate milk.  For a family who loves their chocolate milk, this is great news!
I’m excited to announce that the Wisconsin Milk Marketing Board has officially become my new race sponsor!  As a farm girl and avid milk drinker, it is an enormous honor for me to establish this relationship with them.  I am looking forward to a season of racing with their slogan printed on my race kits; I couldn’t have more pride of the Wisconsin Dairy Industry!  www.winwithchocolatemilk.com

Posted by Jayme Wyss at 9:46 PM No comments:

Behind every race, performance, or competition, there are a lot of things that have gone on in order to prepare a person to get to that place.  I have certainly experienced that to be true as an athlete and a coach, whether it is volleyball, track, triathlons, running events, etc.  Recently, I have also taken on the role of a Race Director.  This experience has really opened my eyes to the ton of work that goes on behind the scenes in putting on a race, and I have a whole new level of appreciation to all the race directors out there!
Ever since I ran the Ashland Marathon in October, I have been working on planning a Half Marathon & 5K utilizing the gorgeous Three Eagle Trail.  I had trained on the trail in preparation for the marathon, which was a trail race.  I loved running the Three Eagle Trail, which was near our duplex in Three Lakes, and it was beautiful as it wound back into the trees and over wooden boardwalks and a bridge.  To my disappointment, the trail that the Ashland Marathon utilized, was not nearly as high of quality, or beauty, as it was also used for ATV’s.
The Three Eagle Trail is almost exactly 13.1 miles (it will be adapted to be the correct distance), and the surface and scenery is perfect for a Half Marathon.  There will also be a 5K distance offered that will also be run on the trail.  It will be a point-to-point race, with runners being shuttled up to the starting lines (Eagle River for the Half, Petroleum Museum for the 5K), so that the Half Marathon runners will get to experience the entirety of the trail.
There is a lot to do when it comes to putting on a race.  From choosing a date and time, planning the route, getting clearance from town boards, local police, figuring out aid stations, reserving port-a-potties, busses, timing services, and facilities, to finding sponsors, volunteers, and advertising, the task list just seems to be endless.  Fortunately, I have an awesome team that I have been able to work with: Tom Rulseh (President of the Three Eagle Trail Foundation), Sue Sharrow (local runner), and Laurie Levandoski (Three Lakes Cross Country coach).  I have also been blessed with a husband who has been willing to design everything (logo, medals, tshirts, website, etc) for us, putting in many hours of work for us.  I appreciate everything that you’ve been doing!  Our website just went live and you can check it out for yourself: 3eagletrail.com/halfmarathon!  The race can also be found on twitter, Facebook, and active.com. Like us, follow us, and most importantly, REGISTER! 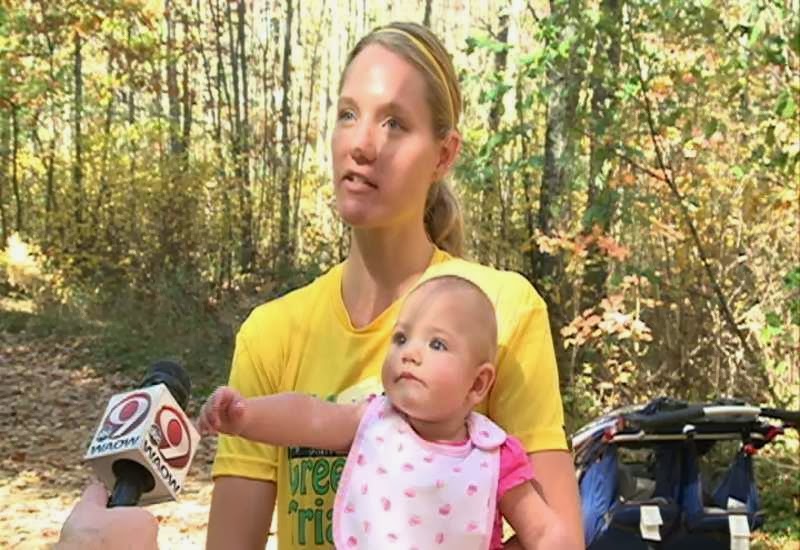 This will be a worthwhile race to be a part of.  The 5K may be more suitable for most people, but the Half Marathon course is definitely one worth experiencing!  The trail was also featured on Wandering Wisconsin by Rob Duns last fall (Baya’s television debut as well!).  Thank you to Rob for all the behind-the-scenes work you did to put together a story on the trail!  Yes indeed, behind every great performance, there is a lot of work that goes unseen, but when it all comes together, it is worth all of the struggles and challenges that had to be overcome to get there.  It is, quite simply, a beautiful moment.  So mark your calendars for October 11, 2014 for the first annual Three Eagle Half Marathon & 5K, and thank you to everyone who has already been a part of this!

Posted by Jayme Wyss at 9:06 PM No comments: