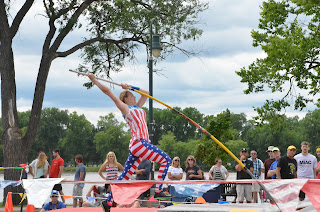 On June 26th, the Three Eagle Track Club hosted its first summer meet.  While I knew I HAD to vault at it, I didn’t think I could also run the event and do other events too, so I just stuck with vaulting at it.  The meet was a huge success and a lot of fun!  I also FINALLY made 11 feet!  I knew I had it in me, so I was stoked to pull that off.  Then at the end of the week on July 1st, I went down to La Crosse and competed in the River Vault for the second year in a row.  Last year I pulled off an 11’6” vault, but my goal going into it this year was to just make 11’ at least.  I didn’t think I had 11’6” in me at this point.  Between kids, rain, and wind, it’s been hard to get in much for longer approach work during practice, so while I feel like I’ve been progressing well in some areas, I wanted to keep a realistic goal for myself so that the event would still be fun (because it is a REALLY fun competition to be a part of!).
I was part of the 2nd flight of females for the day.  I felt good during warm-ups, but also had a hard time getting something good out of the pole I knew I needed to be on.  I came in at 10 feet, and missed on my first attempt, but the feel of the pole from it made me confident instead of nervous.  My second attempt was not pretty, but good enough to clear the bar.  I saw my pole coming back to hit the crossbar, so I popped up and grabbed it before it could hit it.  Not a legal move in most competitions, but they let it slide and I got applause for that move!

I made 10’6” on my first attempt, but still didn’t feel like I was vaulting well yet.  I then made 11’ on my first attempt as well!  There were still about 6 or 7 of us going into the next height, and we all missed our first attempts at 11’6’.  I focused on trying to keep my speed at the end of my approach instead of slowing down, and then I cleared it on my second attempt!  By the end of that height, I was the only one who had made 11’6”!  My attempts at 12’ were nothing special, but to have, once again, been attempting a lifetime PR height was unbelievable!  As much as I wanted to be back at this point by now, I definitely did not see it happening.  Dissecting the videos, I can see the areas that I need to focus on, but I also feel like those are areas where I can break my bad habits (as I’m starting to with short approaches), and to make positive changes after all these years.  I’m unimaginably ecstatic to be at this point.  I’m in a bit of disbelief still actually.  A total of 38 girls competed at the River Vault, and while I was the top (and only) Sub Master, I also tied for 3rd overall.  Pinch me. 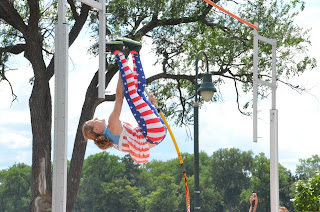 Posted by Jayme Wyss at 8:02 PM No comments: