The assumption may be that I went out and ran the next day.  No way!  My first test run was on a 60-degree day (one of the last for a while) with my husband three days post-delivery.  It was a very slow (slower than when I was pregnant at the end) and painful run of about 2 miles.  After Baya, I was out running 5 days later (though I felt good enough I could have gone sooner), and my only pain was some lingering pelvic pain.  Each time was better and I was probably nearly pain-free after a week of running.  I quickly regained my speed and I felt great!  This time around was a bit different.  I haven’t experienced pelvic pain, but I have felt quite a bit of pain in the lower abdomen/uterine area as it shrinks down to size.  The pain stretches all the way across, from hip to hip, and greatly inhibits my range of motion.  Andy graciously demonstrated that I was at power-walking pace for him.  So much for my excitement in thinking I would be back running strong right away, or faster, or even comfortably again.  When it comes to running, post-delivery has been tougher than when I was pregnant.  I took a few more days off before trying again, but it still felt just as bad and I cut the run at a half-mile.  Physically and mentally, it was not wise to continue. 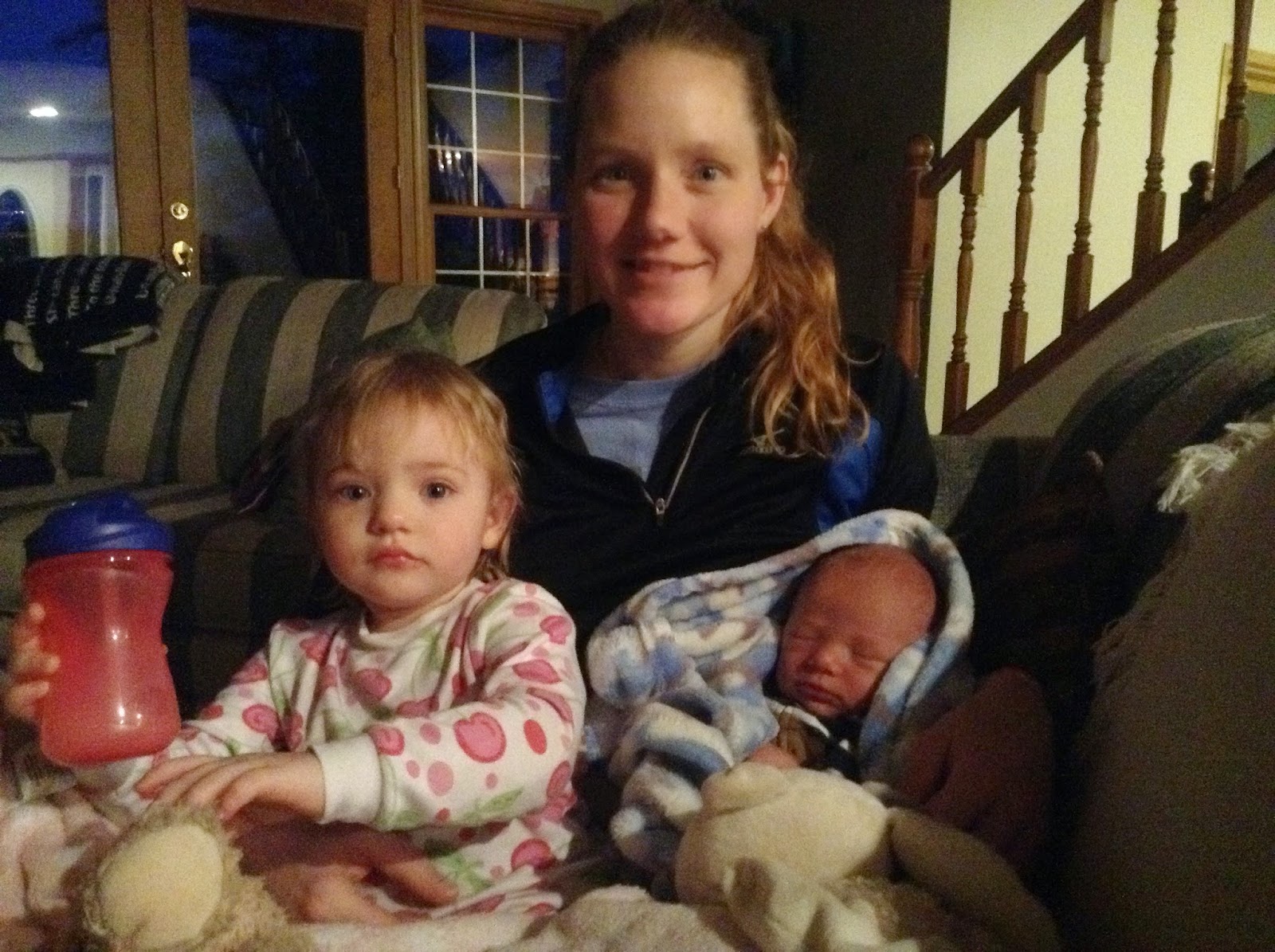 I had a (relatively) fast labor and delivery.  My first contraction was around 6pm on my way home from track practice (couldn’t have timed it any better), and by 7:54 that night, Myles was born.  While I was concerned about his size since he was 5 days overdue, he ended up being just shy of 7 pounds, and again, I was fortunate enough to not tear or need any stitches.  This helps the recovery process immensely, and I felt like this time around my body was recovering faster than what I did the first time.  It was just my darn uterus, which for several days the cramping was about as intense as some of my contractions.  The tortures of motherhood are relentless I tell you.
After my half-mile attempt at running, I eyed my bike sitting in the garage and decided to test out spinning on it for a few minutes.  With Baya, it took me 2-weeks to feel okay sitting on the bike, but this time around, I did my first hour-long, high-intensity bike ride just 9 days post-delivery!  So while I await the feeling of a good run for a while longer.  I can at least return to biking (so long as the kiddos’ naps time out in my favor).  You take whatever you can get and just feel grateful for it.
As far as the swim goes, if my body continues healing at this rate, I might test out the pool by the end of the week.  I’m not sure how my core or kick will feel at that point, but if I can time out Myles’ nap so he’s sleeping at the end of my lane while I swim, I might as well try it out (he can’t go to the drop-in childcare at the Y until he is 6 weeks old).  If I wait another week though, I can live with that too.
The lack of sleep that accompanies a newborn, especially when breastfeeding, has caught up with me.  Somehow you are able to function for the first several days, but today it has caught up with my body and I feel achy, feverish, and run down.  And today of all days – when I wanted to test out the run again cause I was thinking I was finally feeling good – so much for feeling good!  It was another letdown attempt.  Now Andy returns to work after having a week at home (a HUGE blessing!), and I feel like I lost so many opportunities to get out and be active while having his help at home.  But you can’t rush the return, or else it could cause more harm than good.  I’m also unsure about how to even get a run in during the week now, so there is also a lot of strategy to figure out.  So I hope for patience and opportunities and further healing.  I’m also thankful for all the time I have gotten at home with my family as well during this time!  Our two kiddos fit just right on this lap together!
Posted by Jayme Wyss at 4:13 PM No comments:

*I wrote this the day before I had Myles.  Truly believing I had more time before he would make an appearance, I didn't publish it right away.  So while I'm thankfully no longer pregnant, I thought I would still share this!

This was a whole new ball game for me, and no matter what the stats say for how common it can be to go past your due date, I wouldn’t wish it on anyone.  It’s a form of torture, to put it mildly.  After having Baya come 11 days early, it’s even more torturous.  She was due March 9th and came February 26th.  And everything was pointing in the direction of me going early again as well.  I was dilated to 2.5cm at 37 weeks, then at 38 I was 3cm, 80% effaced and the baby was dropped into position.  At 39 weeks, I was still at 3cm, and at 40 weeks I was nearly 4 cm.
I went back in at 40.5 weeks and measured at 4cm.  We set up a non-stress test for just past 41 weeks, and scheduled my induction for the day before I would be 42 weeks.  Were there contractions?  Sure, here and there.  Contractions, cramping, but nothing that signified, “this is it!” even though sometimes, especially in the middle of the night, I would hope.  Then I would wake up in the morning with another day passed.  Those were the worst.  On the days where I was in a mental place of “this is never going to happen,” – those were the easiest days.  Whenever I would get my hopes up though, those were terrible.
There were days along the way where I thought, this would be a good birthday!  But you can’t think that way.  You can’t hope for a particular day, or week, or even the month of February.  We were once concerned that this one might share Baya’s birthday (this one was due 2 days prior to her), but that day has long come and gone as well, and now they’ll have birthdays that are weeks apart.  Because at this point, I have now been pregnant WEEKS longer than I was the first time around.  Baya’s early arrival gave false hope for the next one, and even the doctor seems surprised that I keep showing up for another week’s appointment.  As he put it, “Whenever you try to make a guess, you always end up being proven wrong.”
There are also other concerns that come into play at this point.  This baby will obviously be bigger than my first (6lb 5oz Baya), and it worries me how delivery and recovery will go – will I tear?  This makes recovery longer and we are already weeks behind where I was the last time at this point in the year.  Everything has been delayed, including recovery, which is a big focus.  Will I get stretch marks?  While I continue to swim (so much slower now), run (yup, did another 4-miler), and bike (something I can at least still push out hard watts on), I struggle with motivation, tiredness (I do NOT sleep well at night), and concern about my return to training and racing.  I wrestle with self-doubt: will I make a strong return after this baby like I did the first time?  How do I fit everything in with 2 kids?!  I worry about labor and delivery – there are so many things that can go wrong.  You become borderline depressed.  You can’t shut your mind off, despite being exhausted.  You realize that all the women you know who went over their due date are warriors, not by choice, but warriors nonetheless.
You try to distract yourself with activities.  I try to take Baya swimming as much as I can while I can.  We went sledding before the warm-up (we still could but it’s too wet in my book!).  I picked out a new bike, listed my current one for sale, and planned the track season (which practices started this past week).  Before I hit 40 weeks, I was already losing my mind.  I dreamed my water broke during the night while in bed, and I jumped out so fast that I startled Andy.  Completely wide-awake.  Completely NOT in labor.  Another day passes.  And another, and another.  So my new countdown is until the 20th, when I have my induction scheduled, because believing that the baby will come any sooner, is just too much disappointment to handle.  So I make plans for tomorrow, and accept that I will be pregnant forever.  Or until March 20th.
Posted by Jayme Wyss at 6:01 PM 1 comment:

In with the NEW!

I purchased my Trek Speed Concept in the spring of 2011, and it has been with me for 4 crazy, adventurous seasons.  I’m excited to announce the upgrade to my new ride – a 2015 Speed Concept 7.5!  This new beauty of a machine will be taking me through my next series of crazy, adventurous seasons and I can’t wait!  I’ll post pictures of my hot, new ride when it arrives!

I will be completely honest though in saying that it’s also a little bittersweet.  My 2.5 was my first baby, and we’ve done a lot of bonding over the past 4 years.  Hours were spent riding it, and then there was all the love and care that went into it, cleaning it, greasing the chain, changing tires, wheels, etc.  It has sat in our living room, our kitchen, our garage, rode all over the Midwest to different races.  And while it is considered an “entry-level” bike, I have had more than “entry-level” performances on it.  Because no matter the machine you ride, it is the machine that does the riding that makes the biggest difference.
So now I am parting ways with my current bike and looking for a new home for it.  It’ll go back to its original components (as listed here), but I’m selling it for almost half the original price.  Interested?  Let me know!  More information is available HERE as well!
Posted by Jayme Wyss at 1:23 PM No comments: