This was the third year I’ve competed in the River Vault in La Crosse. It was a gorgeous day, with a nice tail wind for warm-ups. I felt great! Based on how well warm-ups went, I thought I would have a shot at 11-6 again. The last two years here I had made 11-6. I went through all of my poles and I attempted to get on a pole from UW-L, but I never felt comfortable on it. After a first-attempt miss at 10’ with it, I moved back down to my biggest pole and cleared the bar. 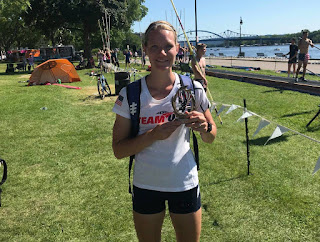 At 10-6, the wind was a bit more fickle, and would at times come at us as a head wind. After 2 misses, I moved down another pole and moved my step up to make the height. At 11’, I moved back up a pole and made it nicely on my first attempt – finally a make that felt good! At 11-6, there were only 3 of us remaining. My first 2 attempts didn’t feel good, but on my 3rd attempt I got back a lot better and it was definitely my best attempt at it. I had the standards buried. If I would have had the next pole in my own line with me, I should have gone on it. At the very least, I should have increased my grip since I was getting so deep.
It was still a fund ay – despite breaking my pattern of 11-6 at this competition. This year, my mom and Baya came along! I was the only sub/master for females, so I won my category, but overall there were only two others who made 11-6, which tied me as third overall. I’m pretty pleased with that!

Posted by Jayme Wyss at 1:12 PM No comments: