Before I even got to Nationals, I was feeling burned out and just very tired. My thought was to take end my season after the race, and take off next season. Last year, I did the Running Bear Triathlon in Three Lakes the weekend after Nationals and had fun with that. This year though, I felt like I couldn’t push for another week. I would take off from structured training after Nationals, and would see what I felt like doing. Well, I held true to my word, and did no swimming, biking, or running that week, until Saturday when I did an easy 3 mile run, simply because I needed to be moving again.

Sunday morning I woke up and told Andy that I was going to do the race as long as my tires weren’t flat. Good to go! It didn’t start until 11am, so I had plenty of time to make a decision and pack up for it. Last year I was 2nd behind the overall male by only 1:18, so early in the season, I was hoping to get in some hard training for an attempt at beating him. Since life has had a lot of curveballs, my goal became to just have fun and I figured I should still be able to finish as Top Female.

I was trying to come up with little ways to cut time, as the Top Male had beat me out of T1 since I was changing my shoes and he wasn’t! So I tested out riding my bike with my running flats on and felt comfortable with that plan. In T2 last year, I had also put a swim cap on and took a drink of water. This year, I had my hair braided so I could skip the swim cap and I didn’t bother with a water bottle for transition since the swim is so short anyway.

The returning male champ took a lead right away on the bike and I couldn’t go with him, but tried to keep him within my sight as much as possible. The bike has a lot of curves and rolling hills, so it’s pretty fun. I was passed by another male that caught up to the lead and stayed on his tail for a chunk of it, but he eventually dropped off from him and I couldn’t see the lead anymore at all. The last quarter mile of the bike is on gravel, but I felt a lot more confident going over it this year. I caught and passed the guy in second in T1 as he was changing his shoes and I could just take off on the run!

I felt a lot stronger on the run this year than last year, probably because I didn’t push as hard on the bike (and I really have had great run training this year!). As I was running out, there were a lot of bikers coming in, including females, so I focused on staying relaxed but pushing on the run. I widened my lead on those behind me and I was slowly gaining on the lead male. The final mile has some tough hills and I lost sight of anyone else. 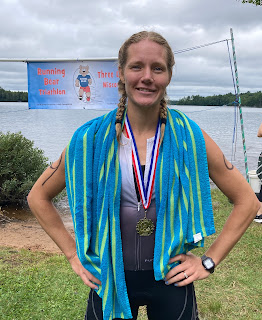 When I got to T2, I took off my shoes and socks, grabbed my goggles and hurried down to the water. I could see the leader in the water still! I knew it would be tough to catch him, so I just tried to swim strong, in a straight line (not so well), and catch my breath from the run. I came out of the water only 37 seconds behind the lead male, cutting the gap in half from last year! I also ended up dropping 2 seconds from my overall time from last year. That may not seem like much, but I was impressed I could pull that off this year! Maybe I’m not quite ready to rule out triathlons from next summer yet. But maybe I’m ready to dropping down to the shorter sprint distance races at least. I must say, it was nice to end on a good note feeling positive about things!
Posted by Jayme Wyss at 8:29 AM No comments: 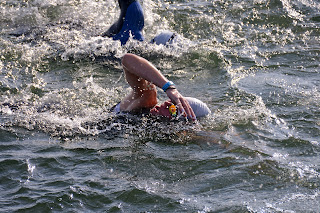 There have been huge changes in our lives recently that has resulted in a lot of sleepless nights. Events have taken a physical toll on me. I debated pulling out of Nationals altogether as a result. But I also had put a lot of training into it and had already paid for it (and it is an expensive race), so I went with the naïve optimism that I would still be able to perform at a high level. My race here last year was so good for me that I didn’t want to think about the potential of not making podium again. Just trying to stay positive, right? 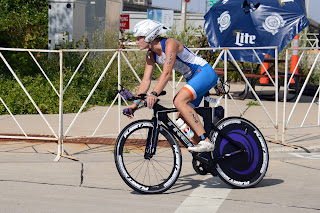 The waters of Lake Michigan measured at a frigid 62 degrees. While cool waters are supposed to help you swim faster, I think there is a point of cold at which that is no longer true. My arms felt rigid, and my hands and feet felt numb. I was over 2.5 minutes slower than last year. I tried not to become disheartened and to just focus on having a great ride. 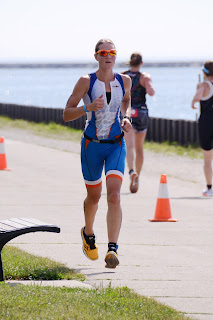 The first few miles on the bike felt good, but over the course I struggled to put out the watts that I should have been. I was passed by a couple women in my age group and couldn’t keep them in sight. This is not how the bike usually plays out for me! The top of my storage box on the back of my bike popped open within the last few miles and I tried fumbling around and putting it back on while riding but it just slowed me down. It was a relief to finish on the bike. I was about 3 minutes slower than I should have been.  I have been running incredibly well in training and was hoping to be close to a seven-minute pace originally. By time I got off the bike, I just told myself over and over to just keep going. I didn’t want to fall apart like I did in Omaha. I assumed that to make Top 10 for podium, I would need at least a 2:20 overall time or faster. Heading out on the run, I knew I wouldn’t make that time. I was looking at 2:25 at least. Part of me regretting being there. I wasn’t having fun. I wasn’t performing well. I was really struggling mentally and physically. It was high heat and humidity with sunny skies as well. I think there were a lot of factors that played into it that really got to me. 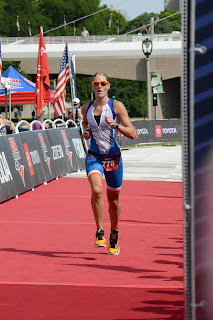 I finished in 2:26:10. Not my best performance, but not my worst. After looking at results, it seemed that a lot of swims were longer and overall times were slower than I would have expected. I could have been 10th and made podium with 2:24:00! I finished 16th overall, which still qualified me for Team USA for the World Championships in Spain next fall, although I will not be taking the spot. It took me a while to come to the point of feeling okay about how things went. Training had taken a back seat the last three weeks, and the accumulated lack of sleep really wore me down. I am feeling the need for a season off, and I look forward to everything that next summer can hold. At the end of the day, I can say that I did my best on that day, and I can’t feel bad about that! 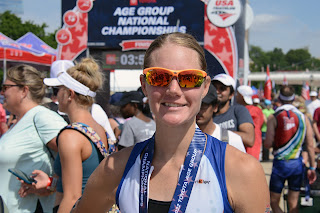 Posted by Jayme Wyss at 7:09 PM No comments: