This is where it really got fun.  After the season ended, I knew that swimming would be the best and easiest sport to continue with and really focus on during pregnancy.  During the racing season, I went hard in all three sports, and didn’t put any real extra focus on one in particular.  I would adjust my training plan as I went along, based on new things I learned and what I needed to do to get ready for the next race, but I pounded out hard workouts weekly in all areas.  It was only a week after the half-marathon that I had the accident, a little bump in the road (not literally in this case) that forced me to take six days off from running, a week from biking, and almost a month from swimming in order to heal.
I put quite a few miles on the bike while it was still nice out, and was able to get some outdoor rides in until Thanksgiving (week 24 of pregnancy).  I would still ride down in my aero bars, but it became more frequent that I would come up out of them just to relieve pressure.  It also became far more frequent than what I desired that I would have to stop for a bathroom break during the middle of the ride.  The joys of training during pregnancy, I tell you!  While I got some quality workouts on the bike done during that time, it wasn’t a main focus for me any more at that point.  I had already had to slow down and pull back on my running, so November seemed a good time to start getting into swimming more. 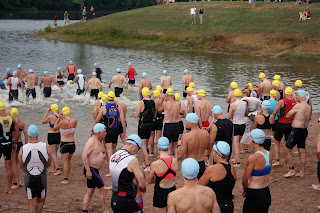 I had sprained my shoulder in the bike accident, so I took it easy as I got back in the pool and slowly worked back into it.  The month off was due to needing to let my wounds close up before getting back in the water.  Once I did though, my frequency increased.  I used to only swim 3 days per week, but I felt like swimming was great for strengthening my shoulder.  By the middle of October, I started pushing harder workouts and paying attention to interval times again (with my initial return I disregarded this), and starting to implement what would become my basic set of weekly workouts for my swim training block (which lasted several months).  Early in November, my “swim coach” took me through a series of drills to work on technique.  All of this set the stage for my focus on the swim, and the substantial improvement that resulted.  This was definitely a great time to focus on technique!
I had a few swim goals that would also help motivate me along the way and that gave me something specific to work towards.  My goal for the 2013 triathlon season was to do my first half-ironman distance race.  To prepare for the swim portion of it, I wanted my build period to include working up to 10,000 yards of swimming/week with a long swim distance workout totaling 4,000 yards.  I also was given interval time goals to try and work towards.  This seemed as good a time as any to test these things out.  In November, I was averaging 10K yards/week (much more than I had been swimming)!  By the middle of December, I hit my first swim workout of 4K yards (easy swimming).  I actually continued to build on my weekly yardage, with my biggest week being over 17K in December, and continued to average 13-14K per week after that.  With the combination of technique work and the increase of yardage I was regularly swimming, I saw my times drop drastically.  Monday I did threshold 200’s, Tuesday was FAPA (fast as possible average) 100’s, Wednesday was a long swim day, Thursday was unstructured (which included some drills and non-freestyle swimming), and Friday was threshold 100’s.  Monday, Tuesday, and Friday I swam very hard.
I reached my interval goal times by the middle of December (week 27 of pregnancy).  A week later, I did a 1,000 yard time trial.  I wanted to be able to use this as a base for after the baby was born, figuring that I was hitting my peak and my window for fast times would be closing as I got bigger with the pregnancy.  Everything was just so unknown as to what I would be able to do, or for how long.  A week later I did another test set of 7x300 on 5 minutes.  I killed it!  All the swim work I did during pregnancy definitely paid off.  I really feel like it was the best time to go through this.  I swam up until the day before I delivered.  I greatly surpassed my expectations of what I would be able to accomplish, and for how long I could keep pushing it hard in the pool.  This experience was by far the most rewarding, motivating, and exciting part of training while pregnant!
The most difficult limitations to overcome, are those we put on ourselves.
Posted by Jayme Wyss at 1:56 PM