I was able to push swimming pretty well all the way to the end.  There would be some good days, and some bad days.  I switched from a competitive suit to a maternity tankini suit for a lot of swims, which slowed my times with the extra drag, but it was more comfortable than squeezing into a one piece most days.  I was able to still hit my times for a couple key workouts every week, and kept pushing to keep one long swim day as well.  Let me mention something about flip turns.  I kept expecting to hit a point where I could not do them anymore, however, I basically kept it up all the way through.  Some days it was less comfortable, depending on how the baby was positioned, and one day I skipped out on a lot of them in hopes that it would help me tolerate the nausea from the heartburn longer.  I should also say that I did stay quite small throughout my pregnancy (comparatively), so it made it a lot easier to move and bend as I needed.  Besides that though, I was able to keep it up!  I actually swam a couple thousand yards the day before giving birth. 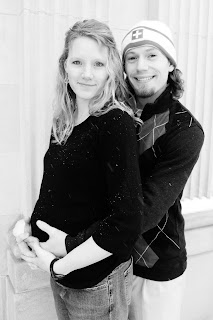 My running continued to slow in the final month of pregnancy.  It was getting harder to find the joy in it that I once knew and loved.  This made it easier to be okay with continuing to cut back on it in order to keep my sanity, and focus on things that I could actually still do well with.  I dropped to running about 3 days a week, and I usually kept the runs under 3 miles in distance.  Anything more and it tended to do a number on my hip flexors and my lower back was tight as well.  On warmer days, it was nice to get the run done outside, and I found a lot more desire to be out doing it.  I’ve never been very good at running indoors though either.  My last run was two days prior to delivery, 3 miles in distance.
I most commonly had Braxton Hicks contractions during my runs.  I don’t recall ever having one while biking, and it only occurred a few times while swimming.  Sometimes they were small and I just ran through them, while other times I had to take a break and wait for it to go away before continuing again.  While the pelvic pain had become more tolerable for the majority of the time, it also came back stronger at the end, most likely due to the baby’s change in position, with increasing pressure on my pelvis as a result.  This mostly only affected running, though I could also feel it in my kick, and sometimes I would want the day off from sitting on the bike as well.  The heartburn was extremely annoying.  I learned how to cope with the pelvic pain, which then made this my biggest struggle for a while.  It really affected how I felt swimming some days towards the end.  It’s tough to swim when you feel like you could throw up at any time.  Some of my runs also felt this way, but staying upright while running made it a little easier to push through.  It hardly affected my biking at least.  Biking seemed to really be a winner throughout the whole course of events (except that minor incident of an accident of course).
Motivation started to take more of a hit in the last couple of weeks.  I started to struggle with it about three weeks out from my due date.  I just wanted our little one to arrive!  I was dealing more often with nausea, and just feeling more exhausted.  I had been hitting it hard for a long time.  I was ready for the next stage of our lives to begin (and for some recovery, so that might as well start with legit recovery)!  I ended up going into labor about a week and a half early, so I fortunately didn’t have to fight with motivation for long, and the recovery process began!
Posted by Jayme Wyss at 6:21 AM