It has been a roller-coaster ride for these past few days.  Last week I took several days at an easy intensity, and backed off my volume for the week as well.  I thought that would be enough to get me ready for my 10K on Saturday morning.  Friday night was spent at a frigid track meet.  Fortunately Saturday morning was a stark contrast with sun, a much calmer wind, and some warmth.  I ran this same 10K last year, so while I knew the course was a little long, my goal was to beat last year’s time on this course.  Andy was running the 5K.  Had I not already signed him up for it in advance, he wouldn’t have run it even.  He hadn’t run in a week, and very little the week before.  Plus, both of us had been running low on sleep all week.

For the first three miles, I held just under my goal pace.  As the 10K route went onto the trail through the woods, I had to pick up my effort, but was still optimistic.  Then over the course of the last three miles, I watched my pace slow, and I wasn’t able to push any harder.  I knew I wouldn’t even be able to hit my time from last year anymore.   I finished in 43:15 – 22 seconds slower than last year.  I was beyond bummed, or even frustrated.  Andy, however, won the 5K with a 16 second PR in a time of 19:16!  His theory now is to do very little running in preparation except some speed work with the track team more than a week in advance, and then be sleep deprived.  Whatever works I guess! 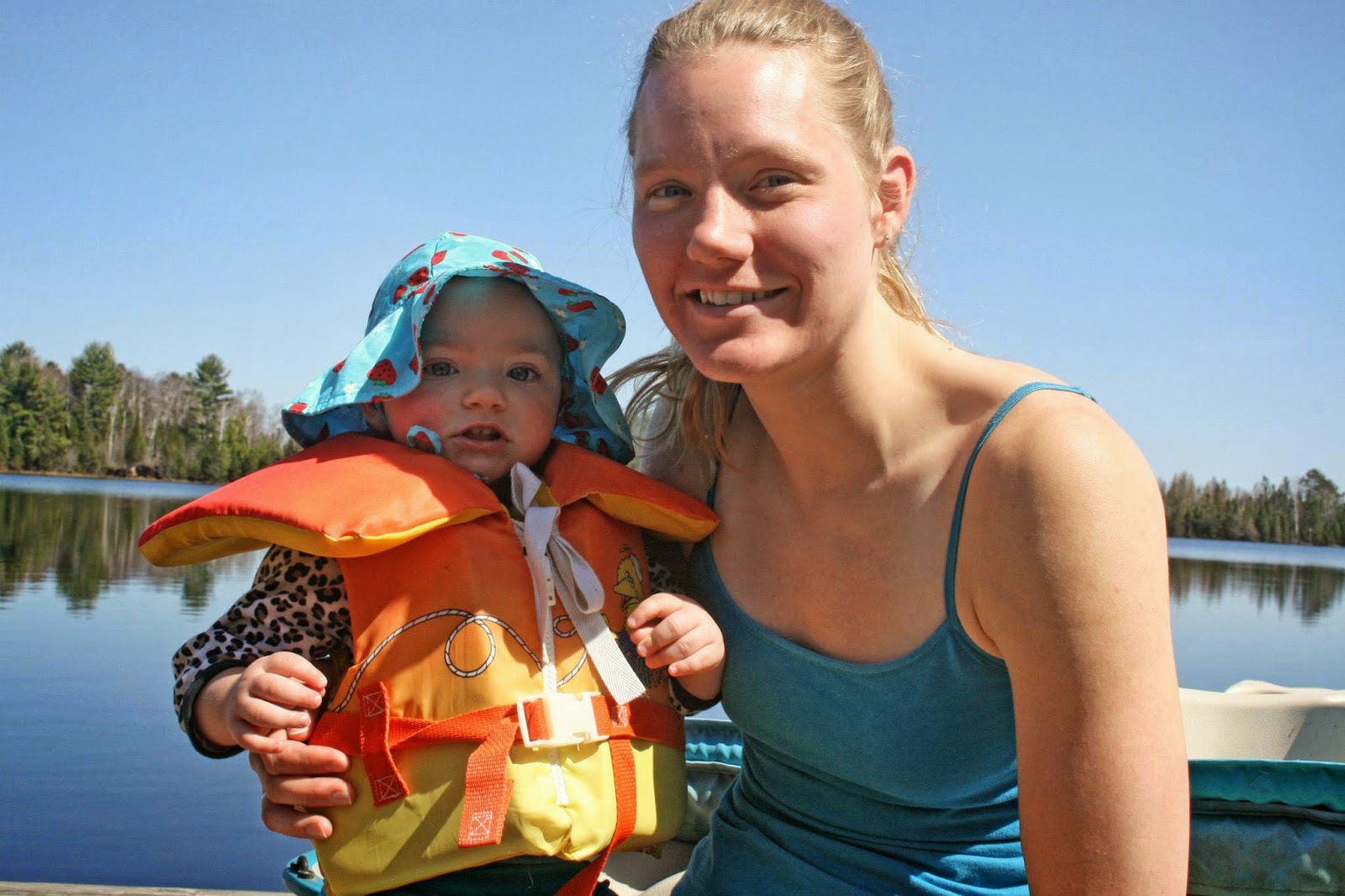 While we were out running our race, Baya was at home with Grandma, and started the day off with throwing up in bed.  In the afternoon when we got home, we took Baya out for her first paddleboat ride on our little lake, which she seemed to enjoy, except for the bulky lifejacket she had to wear.  She seemed to be doing better, except she didn’t want to eat much.  This was only the beginning for our family.
Sunday I set out on a long ride outside – my first time out this spring in shorts and a tank jersey versus winter apparel!  I wasn’t sure how hard I’d be able to go, since my legs were still feeling that 10K from the day before.  I ended up having a great ride (though very tough to keep pushing hard).  I feel like I’m maybe starting to get back to where I was last year on the bike – let’s hope so!
Early on Monday morning, it was Andy’s turn for the stomach flu.  For some reason he still tried to go into work, only to return again shortly after.  With Andy and I being the only track coaches, I’d have to run practice without him, and he’d have to keep Baya home with him.  Shortly after noon already, I could already feel I was declining though.  I sat through practice and moved slowly.  Practice was kept very short and I went home.  Shortly after I got home, it hit me.  Baya cried while she listened to me be sick, and she didn’t understand why I couldn’t play with her, or have her sit in my lap while I read her books, or sit at all.  Andy had been able to hold everything down for several hours, so now he was forced to instantly get better and take care of Baya.  Our poor family!
This has certainly been quite the spring!  It feels like there has been one thing after another to battle, whether it’s the cold, snow, rain, wind, sickness, or general training frustrations.  Less than three weeks out from the race season, and it’s been tough to catch a break.  Luckily, past experience tells me that sometimes I do my best when the odds are against me (just not for this 10K! – let’s save it for the more important races).
Posted by Jayme Wyss at 2:20 PM