What a great weekend!  It was nice to see Draft Cyclery at the expo at packet pick-up.  While they have provided me with biking and triathlon apparel, they also took care of having my racing kits printed on with my sponsors’ logos - and it looks sharp!  It continues to be an honor to race for Draft Cyclery, because I know I can trust that with them, I will get to experience training and racing in high quality gear.  The last thing I want to worry about when training, and especially racing, is how my apparel will hold up or stay in place!

Green Bay has always been a fun race for me.  Two years ago, I did my first Olympic distance at this one, and last year, this was the first triathlon I won as the overall female.  With it being the first Sunday of June, it also serves as a great kick-off race for the season.  Last year it was a high of 40 degrees and windy.  Talk about cold when you start off with a swim and race in a tank and shorts.  Fortunately, despite it being a long-lasting winter (have I mentioned that in enough posts yet?), it has suddenly become summer and the forecast was in the 60’s during race time.  I was only slightly nervous about the chance of passing thunderstorms, and I tried not to let the morning sprinkles as we loaded up and drove over bother me.
I set up my transition area and warmed up.  As we got in the water to warm up for the swim, it suddenly down-poured.  It didn’t last long before quitting completely, but we’d have to race in wet shoes for sure.  We got lined up, and someone saw lightening, and the start was delayed for a bit.  I momentarily became nervous that they might cancel the race.  Thankfully, we got the clearance to start and we were off!  This swim consists of a lot of dolphin diving due to it being a mostly shallow, man-made swimming area.  My time was only slightly slower than last year.  Fine with me  - on to the bike!
This year, the bike was longer due to construction.  It was 29 miles last year, and this year it was about 30.3.  Around mile 12, I passed a guy who was peeing on his bike.  I avoided eye contact as I went by.  First time I witnessed that, and let me tell you, don't think you can do it secretly!  Somehow I managed to cut 3 minutes off of my bike split on this longer course.  I was pushing hard.  It hit me on the run though this time.  The run course was also altered slightly and was longer than last year, so it is not an exact comparable.  I struggled on top of that, and ended up over 2 minutes slower with my run time.  Last year I had found a buddy to run with, but this year I ran in almost complete isolation.  I did manage to run down two men, but the conversations were short as I passed and continued on my own. 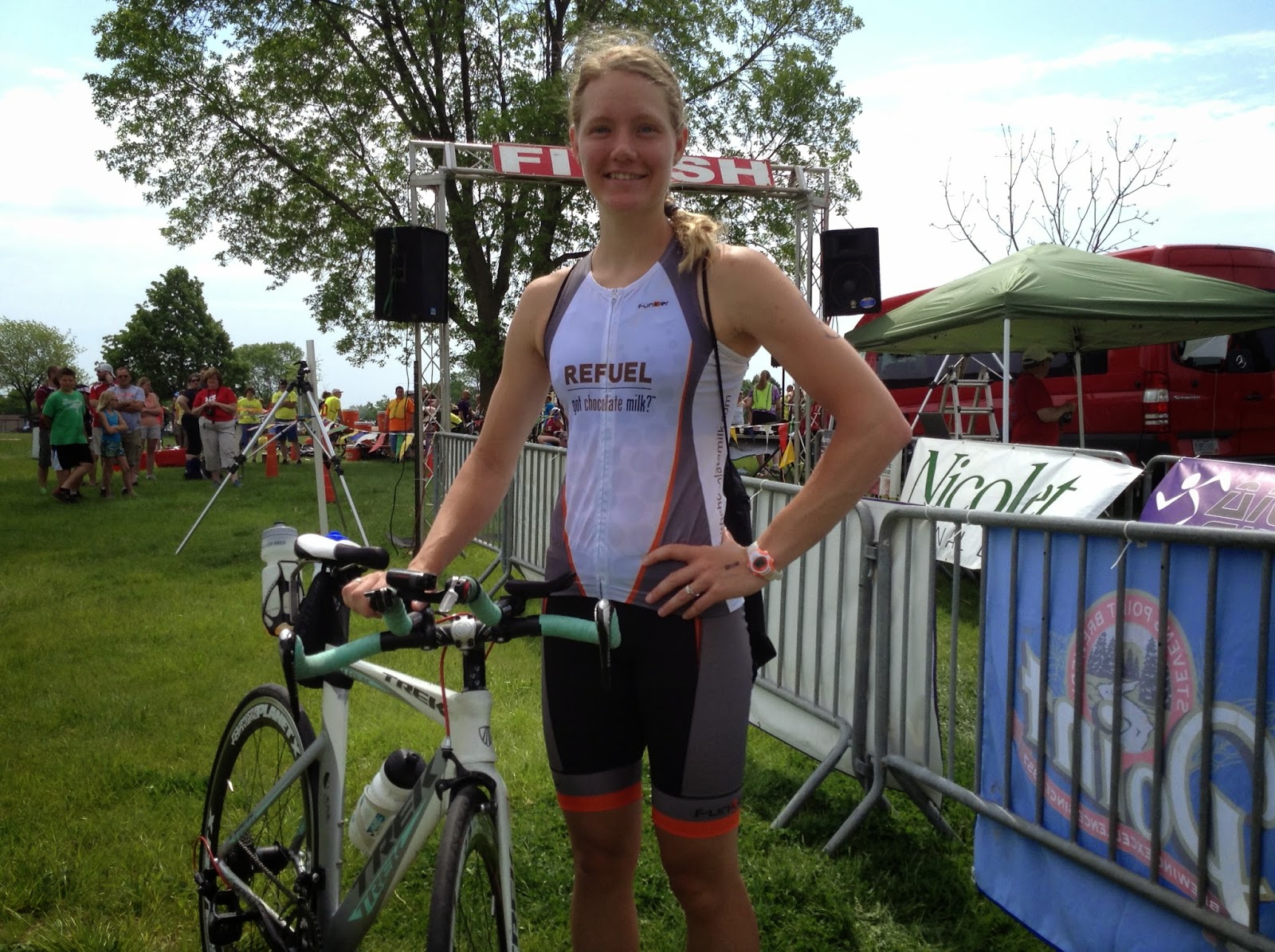 This year was also different in that I have never put in so many miles at this point in the season.  I am ready for my half-iron in two weeks, so while I am also less prepared on the speed end, I definitely have a lot of endurance.  I wanted this race to serve as some speed work in getting ready for Life Time Trinona (Olympic distance) next weekend (since there will be some elite competition there) and then my half.  I mostly wanted to focus on the bike as well, see what kind of watts I could sustain for 30 miles and ride fast.  While I was disappointed in my run, I was pleased with my bike split, and I feel like I overall accomplished what I set out to do at this race.
Despite the course being longer, I was able to beat my overall time from last year as well!  I finished first for females, having my first repeat victory!  I had a comfortable 16-minute lead on the second place woman even.  Meanwhile, my husband ran the 10K again this year.  While his time wasn’t quite what he was hoping, he was the overall winner!  Nice job, Andy!  I have a lot of tough races this summer, but it sure was fun to start off with a double victory!
Posted by Jayme Wyss at 9:12 PM