Journey of Healing on the Three Eagle Trail

Mommy Spotlight #2
October 11, 2014 – Carley Reynolds toed the starting line of her first half marathon.  This wasn’t just any half marathon.  This was the Three Eagle Half Marathon, which utilizes the Three Eagle Trail in a point-to-point course.  This wasn’t just any trail either.  I’ll get to that, but first, let’s back up to July 19th.  Carley was 4 months pregnant with her and Dan’s second child, and just one week from the ultrasound that would reveal the gender of their baby.  She just had her 30th Birthday.  She was planning a “reveal party.”  They were going to be the family of four that they had been dreaming of for so long.

During a surprise birthday party with friends and family, Carley took a break and realized she was bleeding.  While trying not to think the worst, panic and fear still set in, and her and Dan went to the ER.  After repeated ultrasounds, tests, and too much waiting, they were told that their baby no longer had a heartbeat.  They were told what to expect over the next few hours to days, and they went home.  The process began quickly and it wasn’t long and she was holding her perfect baby in her hand.  Tiny ears, closed eyes, ten little fingers and toes, a fat little belly, and… he was a boy.  He fit perfectly in her hand and stretched from index finger all the way across her palm.  They named him Matthew.
Carley and Dan started their healing process by spending time together outdoors – out on the lakes, and on walks and bike rides on the trail by their home.  They wept and they mourned their loss.  They planted a tree in Matthew’s honor.  During that first week of healing, Carley realized a few things.  This was a completely unexpected event in their lives that she had no control over.  It has forever changed her, but it could be a change for good.  She set out to take control over what she could: what she did with her time, and how she treated her body.  She wanted to be the best version of herself, and so started her wellness journey, with her first mission being a half marathon.  And what could be better than a half marathon that used the very trail that she and Dan spent so much time on trying to heal?  It would be a tribute to her family and the son she lost.
At the starting line, Carley took a deep breath and started on the culminating event that she had been preparing for, for the last three months.  After the first few miles, she settled into a rhythm.  Amongst the beautiful towering pines and over boardwalks, the winding trail went on, and her mind was a rollercoaster of emotion.  There was doubt, but there were also feelings of love and support from family and friends.  She had a mission and a vow to change her life for herself and her family that she had to keep.  Every sunray and cool breeze carried Matthew’s presence, with him encouraging, “You can do this Mama.” 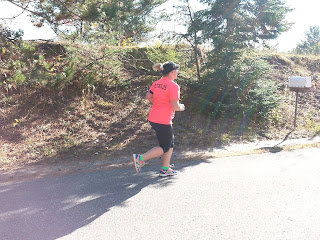 Nearing the finish line, Carley was cheered on by her friends, her husband, and her son Collin, who ran out to her and joined her in crossing the finish line of her first half marathon.  She squeezed Collin tight and received her Finisher’s Medal, along with a hug and a bouquet of flowers from her dad.  They stood there, squeezing each other tight, and cried.  This was a life-changing journey.  This was about family, friends, support, encouragement, and love.  This year, Carley won’t be running the Three Eagle Half Marathon.  Instead, she’s celebrating being 21 weeks pregnant with another baby boy – due February 13th! 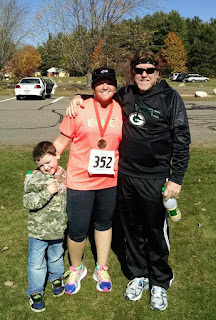 As a competitor and athlete, I understand that fitness can be a great outlet for emotion.  It can provide an emotional lift, an adrenaline boost, a time for thought process, and an opportunity for self-discovery as you learn more about yourself and gain greater perspective.  As a mother, those benefits become even more valuable!  And exercise is something that can be a family event, or even a chance for peace and solitude.  As the Race Director for the Three Eagle Half Marathon/5K, I couldn’t be more proud of the race that provided such a journey of healing for someone.  I hope that it continues to be a challenging, yet rewarding event for many years to come!
Posted by Jayme Wyss at 7:44 AM