As I am in the midst of planning out the 2016 race season, I’m starting to feel a lot more focused.  The past 3 years I was training for the Half Ironman distance.  After the debacle that was this past season, where I ended up switching to a shorter distance instead of racing my half that I had trained for, I’m instead going into 2016 with the focus being on the Olympic distance.  To be more specific – my focus is on Nationals, which will be in Omaha, Nebraska for 2016.  With the age-up rule, I was ranked 12th in the 30-35 age group (yikes, I’m getting old!) for Team USA. 12th!  Top 10 make podium at Nationals and that’s my goal!  I can always return to the HIM distance when the kids are older and I can get better sleep…
While Nationals isn’t until August next year, I’m already training for it!  For 6 months, I’ll be rotating through doing single-sport focused training blocks.
I’ll be doing some BIG (high-volume) swim weeks before Thanksgiving and Christmas when we’ll be traveling and I’ll have some down time to recover from it.  I’ll swim up to 6 days/week, and hit at least 16,000 yards or more.  I’ll have mostly structured workouts, focusing on muscular endurance, sprints, and drill/form work.  Some of the workouts come from a book, others I’m writing or I’ve used in the past (threshold swims with short breaks, short sprints with longer breaks, ladders, intervals, and even using a variety of strokes).  Some are short swims of only 2,000 yards, others will be around 3,600 or so, depending on my available time and what the purpose of the workout is.
During this time, the bike and run are basically on maintenance mode: low mileage, with low to moderate intensity.  I took a lot of time off from the bike, so I’m basically just getting back into it.  I’m including some builds and short, high-intensity intervals with the aerobic level rides, and plan to ride 3x/week for around an hour or more (outdoors on the weekends if I can – guess that might be done now).  In December, I’ll starting adding more intervals and intensity once/week in preparation for the bike block that’ll start in January.
I’m keeping my runs mostly at an easy, conversational pace as base mileage.  I’ll include some strides in about half or so of the runs.  If I’m feeling antsy for some speed, then I’ll do a fartlek (speed play) run one day/week at most.  My goal is to run 6 days/week and have my mileage build from around 15 miles/week to about 24 or so during the swim block (keeping it easy). 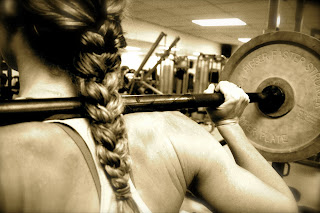 I’m also really putting a lot of focus on strength training right now as well.  I’m lifting with the volleyball girls, track kids, or whoever else wants to show up, 3 days/week.  I do their program with them, and then I tack on some additional stuff after.  Each day we do 2 core lifts: squat, bench, clean, deadlift, snatch, or incline.  We also have a couple auxiliary lifts: lateral pull-downs, hamstring curls, glute/ham, box jumps, etc.  I also do the mule runs with them, as well as the core work.  If I have time, I’ll also do the dot drill and ladders with them.  After that, I run through a P90x workout, which throughout the week involves: pull-ups, push-ups, triceps, biceps, legs, etc.  It takes me an hour to get through the whole thing.  I’m feeling stronger, and I’m excited to be back at it!  I also know that it can pay back in big dividends, in strength, durability and injury prevention, improving all-around athleticism.  Let’s hit the weights!