Without triathlons, of course I had to have a new summer project, which resulted in the formation of the Three Eagle Track Club.  I got it USATF certified, and we had two practices a week in the evenings.  It was open to all ages.  Typical turnouts for practices were 8-12 people.  Initially, I thought we would just travel to meets that already existed, like Badger State Games.  We did have a group that went and represented at that meet, but I decided a smarter move would be to really try to grow it locally.  I knew this was also a gamble.  It could potentially be a success, but it could also very much end up being a flop. 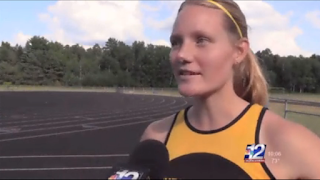 We hosted two summer meets, on Monday nights at the end of June and July, at the Three Lakes track.  For the first one, we did everything by hand.  I wrote out the heat sheets by hand, and everything was hand-timed.  Afterwards, I had to input all of the results to submit it to athletic.net, but it was very simple on meet day to take late registrations, and add people in, combine, etc.  We had around 46 competitors, and it was a blast!
I had a sense that the second meet would be a lot bigger though, so I inquired with a local timing company about coming down and helping us out.  So on July 31, we hosted our second summer meet, and the response was almost overwhelming!  We had a ton of late registrations which made it difficult to get everyone typed into the system, and then combine age groups for seeding heats, etc.  We definitely learned a lot from the experience and how to improve upon it for next summer.  At our second meet, we had 74 total competitors!  We had people traveling from Owen-Withee, Waunakee, Waupun, Wausau, Spencer, Merrill, Minocqua, and Mercer to partake in the meets.  We also had a large group of local youth that got involved too! 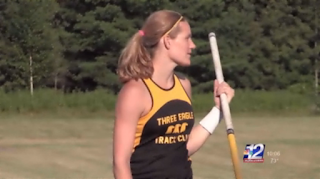 It was so exciting to be able to offer this opportunity in the Northwoods.  All other summer track opportunities are in southern Wisconsin.  The ages ranged from 1 to 57 years old.  We had families battling it out against each other.  Registration was only $5 per person, and we offered all high school track and field events.  Channel 12 came out and did a story on us (check it out here).  Andy made a highlight video form the first meet, and we will hopefully see more pictures yet from our second meet. 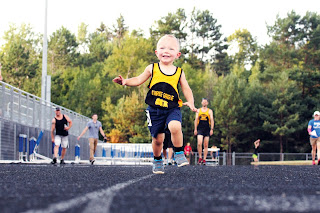 I had ordered 30 jerseys for our Club, and over the course of the season, I had 27 checked out to tracksters.  Our Club consisted of local Three Lakes people, as well as from Crandon (who has a track team, but no track).  I competed in both meets, and cleared 11 feet at both of them (I’m happy with that!), and I also ran the 200m in the second meet.  I went neck and neck with a student-athlete of ours, who ended up beating me by .03 seconds.  It was a blast!  And a PR time for me compared to what I ran at Badger State.  It was super fun, and mind-blowing at how successful it was!  One man who came and spectated said, “I smiled. I laughed. And when I walked away, I had a tear in my eye.”  Another lady who saw the story on Channel 12 said, “That was just the neatest! I got goosebumps just watching it.”
It was immensely rewarding to be a part of it from the ground up.  Baya and Myles also competed in both meets, running the 50m dash, long jumping, and throwing the softball.  On the way home from the second meet, Baya said, “Mommy, I want to do another track meet.  My favorite part was running. (pause). The best was throwing. (pause). What was your favorite part?”  It’s conversations like these that I hope I’ll be having with my kids for many, many years to come.