The final 13 days leading up to this race was stressful. I was trying to quickly recover from the crash, get in some final prep, and dealt with a lot of pre-race nerves and anxiety. This was one of the most mentally tough lead-ups as I dealt with self-doubt. Thankfully, on race day morning, I was actually more excited than nervous or anxious. I resolved to enjoy the day and only focus on the things I could control. I wore a bike jersey to cover my shoulder. My sleeveless wetsuit did rub on my wound, but the pain was tolerable. I do love the new wetsuit though! I actually really enjoyed the swim. Even though I recently sprained my shoulder, I still managed to finish it in 37 minutes - just more than a minute slower than 4 years ago on this course. I was happy with it.
The bike was going really well and I was having a lot of fun with it. After a turn-around, I passed a guy that I had been leap frogging with, before coming up to an intersection. Let me start by saying that I never anticipate having to stop on my bike while RACING. Well coming up on this intersection, there were 4 cars lined up, but I still expected to be able to go through, because an officer was running the intersection. Nope. He waved his arms and yelled at me repeatedly to stop. I will also say that it takes time to come to a complete stop at the last minute when you are at racing speeds. I had a flashback of the crash, had a panic attack, stopped and then sobbed at my bike. The officer just told me to go to the side of the road and calm down. The guy who I had just passed came up alongside me, asked me if I was okay, and I just followed him instead. 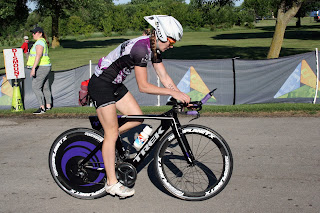 After we got going again, a group had caught up to us (they probably didn’t have to stop). It took a few miles for me to mentally, emotionally, and physically calm down from that experience. A lady in blue had caught us and leap-frogged with us before she eventually pulled away. The rest of the ride went well and I managed to still cut more than half a minute from my 2014 bike split, even with the stop.
Heading out on the run, Andy told me he thought I was in second by only a couple minutes. I assumed I was behind the lady in the blue. The ascent up High Cliff is killer on the run. It is mainly all off-road trail at the top of High Cliff: dirt, grass, and rocky trails with some steep inclines. It is a truly tough run. I had no idea what any of my mile splits were (I kept missing them), and I ran purely on feel. Sometimes I would pick up a guy to run and chat with, which really helps to pass the miles. Eventually I would drop all of my running buddies though. Andy caught me at different parts of the 2-loop course, and updated me a couple times about the status of the leader. He thought I could catch her. I told him I would rather throw up (than to push harder). I enjoyed the swim and the bike (mostly), but I felt like I was more trying to survive the run as best as I could. I also didn’t want to get into my own head about placement. I can’t control what other people do. At one point he told me I was gaining on her. Before the start of the run, I also thought I could break 5 hours for the race, but I later decided it would be tough to do, since my run wasn’t going very fast. 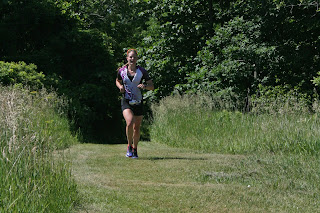 In the second loop of the run, you get mixed in with a lot of people – the Olympic distance triathletes and those doing the Half that are on their first loop. With a couple miles yet to go, I caught up with some ladies. One was clipping along fairly well and it took me a while to even catch up to her (you just try to overtake one person at a time on the second loop). As I passed, I noticed she had a low number from the first wave, so I asked her if it was her first or second loop. To my surprise, she said, “Second.” Was this the lady in first ahead of me? Just in case, I tried to really pick it up from there on out to make sure she wouldn’t decide to pursue me! I told myself to not get excited and to believe that there could still be that lady in blue ahead of me, or someone could still come up from behind.
I ran down High Cliff hill as fast as I could without falling. Glancing behind me, I didn’t see anyone coming for me. Looking at my watch, I saw I had a shot at breaking 5 hours still! I hustled it to the finish line to be the ONLY female to go sub-5 with 4:59:22! I had won – unreal (even with that stop on the bike and emotional breakdown)! (The lady in blue I later discovered was part of a relay.) Baya has told me that she thought I would win, even included it in her prayers one night, and during the run I had been preparing what I would say to her when I would go home without the win. I was super excited to tell her the news! She said her low of the day was not going to see me race. Bless that girl’s heart!
That was the most challenging race – mentally, emotionally, and physically (my legs have never been in that much pain from a triathlon before!) but I’m really glad I pushed through the challenges and finished strong. It was a good experience to go through. I’m also glad I didn’t disappoint Baya! My favorite part from the announcer at the finish, "Oh, and we're not surprised - that's Jayme Wyss!"