This past weekend I finally did my first half-ironman distance race.  There has been a lot of preparation, anticipation, and anxiousness leading up to this.  I had six weeks of focused training, uninterrupted by other races.  My realistic goal was to complete the distance (1.2 mile swim, 56 mile bike, and 13.1 mile run) in 5 hours and 30 minutes.  I thought an attainable goal was 5:15, and someday, I wanted to go under 5 hours.  I had several weeks of running 35-40 miles/week, with my longest run at 11 miles.  I was swimming over 10,000 yards/week, with my longest swim being 4,000 yards.  I had a couple weeks of biking over 170 miles/week, and my longest ride was 76.7 miles.  This race would be my sweat and blood.  It would test my heart, my will, my mindset.

My mentality was to be conservative, especially early on.  There is a lot that can happen in over 5 hours of racing, and I wanted to be strategic and careful that I did not bonk on the run.  I was warned to expect that the race could take me closer to 6 hours, especially since it was my first one, and that I should just make sure and set myself up to run well.  What would I be like on the second half of the run?  Would I be my chatty self, or would I be grim?  Would I be walking?  I did not want to have to resort to that, but I have also never hit the wall yet in training where I could not run.  My longest training session was 4:20, what would happen after that?  There is certainly a lot of unknowns.  This could be a long day. 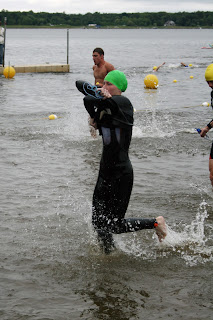 The weather was near perfect.  It was about 50 degrees at the start, making the wetsuit feel great instead of too hot.  There was a bit of a wind, making the water choppy for a stretch and it had to be dealt with on the bike as well, but I didn’t really even let it enter my mind.  They were just uncontrollable, external factors.  I was just here to do my thing.  The swim was fine.  My goal time was 35 minutes, and I hit it, coming in right where I wanted.  I struggled a bit with the wetsuit and tried to get out of T1 quickly.
The first half of the bike was chilly, but the body doesn’t notice as much when the mind is not fixated on it.  The first miles went by quickly.  At mile 20, there was an aid station.  I should have stopped there at the port-a-potty, but kept going instead.  I have been making it through my long rides just fine, I did not think I needed (or wanted) to get off my bike to stop and go.  I should have stopped at mile 20.  I was in agony waiting for mile marker 32, where the  next aid station was supposed to be.  I quit drinking on the bike for at least a half hour or more, feeling like I was about to explode at any minute.  I looked at the trees alongside the road.  Should I just stop here?  No, I’ll keep going.  Then there came a point at which I thought I might have an accident on the bike, just because I could not contain myself any longer.  The road got bumpy for a stretch, adding to my agony.  Not cool.  Finally I see mile marker 32, but nothing around it!  The aid station was just before mile 33, I pulled over and stumbled off my bike, almost falling over and dashed into the port-a-potty.  Sweet relief.  That was the most painful part of the whole experience that day.  I thought I would be in pain on the run, but nothing else that day compared to this. 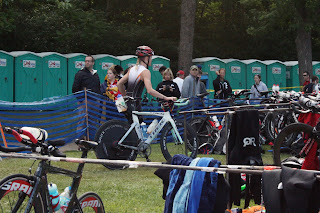 I pushed it in on the bike, the miles going by much quicker again now that I had my pit stop.  I wanted my bike time to be under 3 hours, preferably 2:48, but even with the pit stop, I came in around 2:45 (and the course was 1km long due to construction).  By time I hit T2, however, I had to go again.  I rushed through transition, and the port-a-potty at the exit was being used, so I thought I needed to make it to mile 3 before I could go.  Fortunately, there were three at the bottom of run out and I stopped right away.  A bit delayed, but I was finally off and running with 13 miles to go!  I started off at a comfortable pace.  My goal pace was 8 min/mile, but I started out just a bit slower than 7:30/mile.  Should I slow down?  Was this going to make me hit the wall later?  In order to hit my 5:30 goal time, I just needed to be under 10 min/mile, so I figured if I did hit the wall, I could still hit my goal time, especially if my first miles were this fast.  I decided I would risk regret and just keep going based on feel.
At mile marker 3, I ended up running alongside a man from Wausau who was running a 7:30 pace, and we stuck together.  It was great to have someone to chat with who was going at that pace, and I decided I would try to hang on for as long as I could!  Those miles together actually paced by quite quickly, and I was thankful for the company.  I also don’t know if I would have pushed that pace on my own either, and so I was grateful for that as well.  We hit mile marker 6, and I said, “Well, the first 6 miles were easy!”  His response was, “ Speak for yourself, love.”  It was an out and back run, and on our way back, a man passed by us and told me I was the fifth female.  Could he be right?  I knew the top five got prize money, but I shouldn’t get my hopes up too much.  I needed to hold my position though. 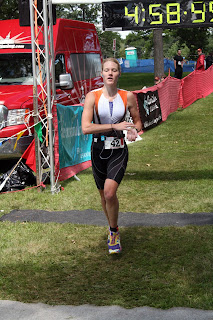 I kept watching our pace and overall time and I knew if I kept it up I could go close to 5 hours.  He told me to pick it up if I wanted.  I did slightly, and he still kept up with me.  We passed another woman.  Did this put me in 4th?  Surely I was at least top 5 by now.  I didn’t think I needed to pay attention to placement, after all, this was my first half.  How could I expect this to be going so well?!  Then we had about 3 miles left and he told me that if I wanted under 5 hours, I should push hard the last 10 minutes or so.  I picked up my pace then and ended up leaving him behind.  The last miles alone felt like they took a lot longer, as I kept glancing at the time and trying to figure out how close I could get.  Could I push it hard enough in the end to make it under 5? 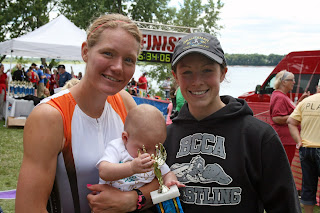 I had a mile left and I was booking it.  I was hungry for it.  I came into the last section and kept glancing at my watch.  A slight downhill before the ascent to the finish line.  I charged the hill and crossed the finish in 4:58:51.  Unbelievable.  I had the 4th fastest time for females, and got a piece of the prize money.  What a perfect day!  It was about 70 degrees for the run, with times of shade and sun.  I had stuck to my nutrition plan for the race, but with such cool weather, it didn’t fully get tested.  I felt great for the entire race (except for that whole bathroom fiasco).  My half-marathon time was actually a PR from the one I ran last fall as well.  Simply unbelievable.  Now that I have my first half under my belt, I’m thinking I set my own standards too high with a sub 5 hour race, hitting my “someday goal” right off the bat.  This is what I had been training for though.  This was my sweat and blood.  This was my heart.  And cheering for me on the side was my husband, my mom, and my little 5-month-old baby girl, wearing her “tri, mommy, tri” onesie.  A perfect day indeed.
Posted by Jayme Wyss at 9:56 AM