The Return to Wausau

This was my first time of doing a back-to-back with race weekends.  I just completed my first half-iron on Sunday, went into a week of recovery/race week with a long course race (.5mile swim, 28 mile bike, and 5.8 mile run) six days later.  My very first triathlon was at Wausau, so I always enjoy doing this one every year, despite it being the most challenging bike course I’ve ever done, with all of the intense hills.  I tried to hold back and keep it light for the five days of training between races.  The day before the race, I felt alright, but had a tight hamstring that raised a bit of concern.  I planned on the bike loosening it up for the run and decided to not worry about it. 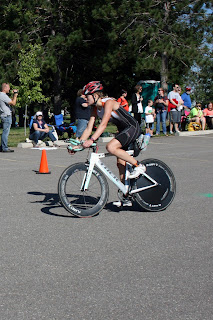 The weather was perfect.  It was sunny, a slight wind, and relatively cool, with a high of only 75 for the day.  It was chilly at the time of the swim, which did not allow for wetsuits.  Last year was my first time doing the long course for this one, and I had a horrible swim .  My goggles had fogged up and I couldn’t see where I was going.  My time was awful.  This year I dropped over 2.5 minutes from my previous time, and was the first female out of the water.  I felt good on the bike, and wanted to push it really hard for this race.  I wanted to see what I was capable of.  And of course, I was in it to win it.
I wasn’t seeing much of anybody on the bike, much less females, until almost 10 miles in, when I was passed by female #9.  She was moving.  I was determined to not let her get out of my grasp.  I hung behind her for dear life.  This was exactly what I needed to push me.  She pushed hard up the hills, gaining some distance, and I’d gain ground on her on the descents.  I passed her up a couple times, only to have her pass me again shortly after.  I had about a minute on her with my swim time, but she made up for it on the bike, and we ended up coming in and finishing that leg together.  We rode hard, averaging around 22mph, and being the only females above 20mph for the long course.  It was a great ride.  I didn’t know where any of the other women were, but I knew she would be hot on my tail, so I flew through T2 and booked it out on the run.  I was hoping she had burned out her legs from the ascents, and I later found out that she was hoping she had burnt me out as well. 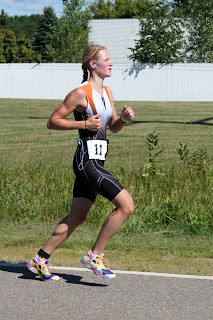 Normally the run is a 10K, but due to construction, it was cut a bit short this year.  I was cruising.  I didn’t know how much of a lead I had on her, or if there were females ahead of me to catch, but adrenaline drove me.  Hunger drove me.  I wanted this race.  Could the turn-around of this race take any longer to reach?  I saw the male leaders as I met them on their return and watched for females.  None.  This is where I wanted to be.  I hit the turn and saw #9.  I had a decent lead on her, but I wasn’t going to let up.  I’m not sure if I saw any other long course females when I was out there, as they are harder to distinguish when rejoining with the short course competitors.  I brought it home, exhausted, satisfied.  I ran the 5.8 miles at a 6:46 pace.  Had it been a full 10K, there’s a good chance I could have pulled off a 10K PR time. 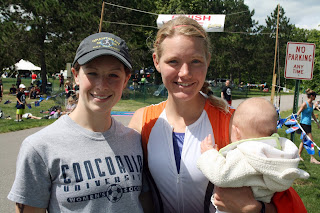 I was not expecting to be able to bounce back so quickly from my HIM.  I dropped almost 9 minutes from my bike split from the previous year, and my run pace was substantially faster.  Granted, when I raced last year I was 2 months pregnant and planned it to be a conservative race.  This year, I left everything out on the course.  I ended up winning by over 3 minutes.  A comment from my friend, “All the fast women are racing next week” (Nationals in Milwaukee).  It’s always good to keep things in perspective, and there’s never room for pride, just perseverance.
Posted by Jayme Wyss at 7:31 AM