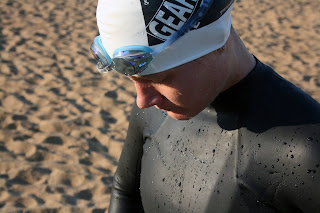 My husband and I traveled down to Iowa for my big race of the season.  It’s been cooler out for the last several weeks, making it feel like summer has already ended, but now that we were traveling south for a big race, the weather decided to also heat up.  Race day had a high of around 80, but it was intense sun with few clouds in the sky and very little for breeze (nice for the swim and bike but making it a very hot day out there).  The race didn’t start until 7:30, and by time my wave started it was around 8am and things were warming up fast.  It was a time trial swim start, which meant that one person would start every 3 seconds, instead of in giant waves together.  It made it less clustered of a start, but it also made it more difficult to be able to tell your placement throughout the race.  The water was calm, but I had a hard time sighting so twice I paused to clear my goggles.  The giant buoys were too far apart and there could have been more of them.  I didn’t want to chance swimming extra so I figured it was worth my time to get a clearer sight.  I dropped a few seconds from my previous swim time at Chisago Lakes, though it was pretty much the same. 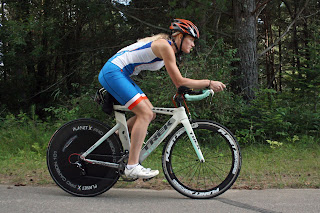 It was a long transition area, running up the beach, through the grass, and into the parking lot that served as a long, narrow transition where you ran by all of the bike racks.  I got out on the bike and focused on my watts and how I was feeling.  You could tell it was getting hot, but at least you always have wind while biking in order to help cool the body.  I went through 4 bottles on the bike as well.  I wanted today to be more about what I could do on the bike.  My plan was to bike harder than what I did at Chisago Lakes, where I felt like I was trying to be conservative so I could run.  For this my plan was to bike a lot harder and try to just hold on in the run.  Heat was also a lot bigger issue with this race that I needed to be aware of though, and that makes things a bit trickier.  It was an out-and-back bike course with rolling hills.  I got close to the turn-around and counted the females ahead of me.  I counted 7, though keep in mind that’s physical placement, not necessarily time placement.  After the turn-around, I passed 5 of them within the next 8 miles.  I rode a little harder on the way back, hoping to put some distance between us. 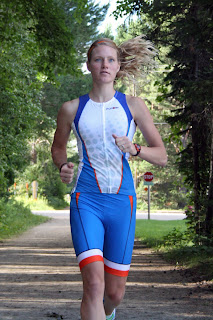 I had a solid bike split, way better than I was hoping for, averaging close to 22mph and dropping more than 10 minutes from my previous bike time.  I just needed to run well now and this could be a very solid race.  I had a pit stop in T2 and headed out on the run.  I felt good for the first mile, clipping along at a quick pace and feeling optimistic.  If I could run the same split that I did at Chisago Lakes, I could go under 4:50 with my time.  I wanted a 7:20 pace, but as the miles wore on, I was just trying to hold on to a 7:30 pace.  There were some big hills in and out of the park, and one at the turn-around.  On the way out, the air was thick and stifling at times.  I took an extra salt tab at mile 3 and drank a cup of water at every aid station, and sometimes was able to dump another cup on me.  I held 7:30 for the first half of the run, and stayed fairly close to it for the next few miles.  There is a giant hill about 2.5 miles out though and it was tough.  My pace significantly dropped.  Another decent hill in the park in the last mile of the run, so close to the finish, yet so far.  My run time was about 4 minutes slower than what it was at Chisago Lakes.  My body was beat for sure. 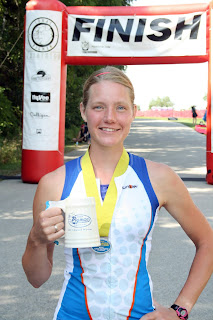 I finished with a time of 4:52:08, a significant overall time drop from 4:58:51!  I managed to make the top 5 again, placing 5th overall for females, which was a small cash prize.  There was some very good competition at this race, some very fast women.   I’m glad I was able to hold on to some of them!  It was a fun race, though warm and pretty intense.  I had high hopes for the race, but tried to also keep realistic expectations.  I managed to surpass my bike goal and pulled off a significant PR.  I really didn’t have anything to complain about when it came to the execution of the race.  It was definitely a learning experience, and added to a great overall season.  Andy was my support for the whole weekend and race, as he has been at every race, taking pictures and cheering me on.  What a trooper!  And who would have thought that Iowa could be so much fun?
Posted by Jayme Wyss at 9:14 PM