We went to our hometown for the Clear Lake Days festivities at the end of June.  Since a 5K was being held, Andy wanted to take the opportunity to shoot for a 5K PR.  I was halfway through a 4-week break in racing, so I also took advantage of the opportunity to focus on run speed.  It has been raining a TON in Minnesota and western Wisconsin, and while the forecast showed for yet another day with chance of rain, we fortunately had a dry morning.  There was still wind and it was pretty hot and humid, but overall, not bad weather.

There were quite a few younger kids lined up at the front, so I let them go out fast (as I suspected they would) and then passed them all.  We knew the route as we had run the race in the past, but assumed there would be mile markers to help us know our pace.  Andy was planning on wearing our GPS watch, but it quit working recently.  Much to our dismay, we got to the area where we thought the first mile should be, and never came upon a mile marker.  At that point, there were three men ahead of me, and Andy was in second.  I tried not to let him get too far ahead of me, as our PR’s are only about a minute apart.  I passed the man in third. 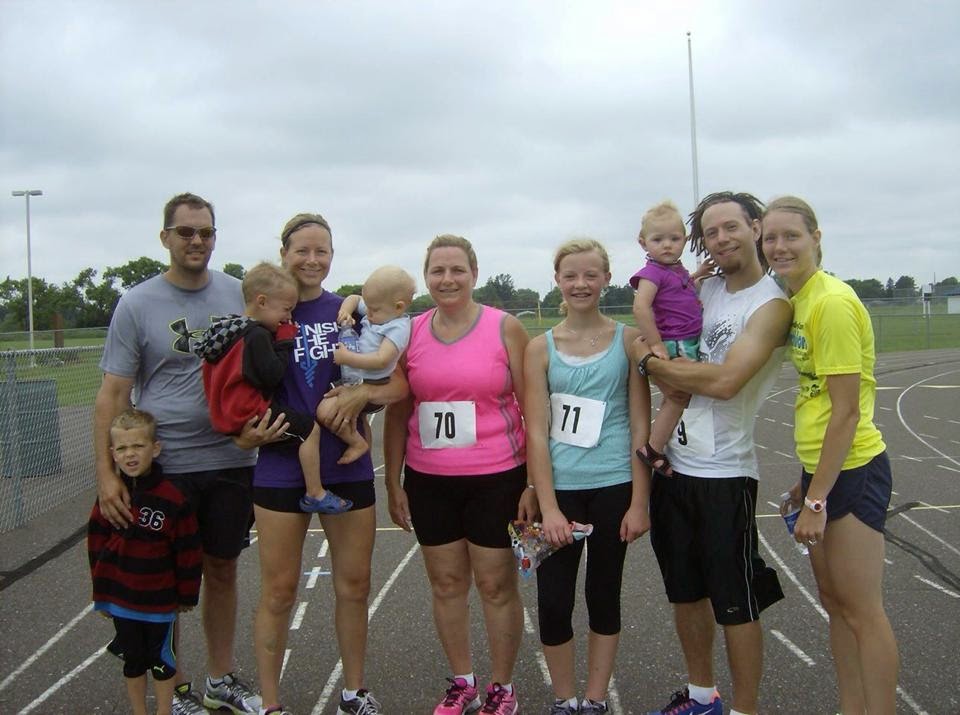 I’ve said before that the 5K is a tough and painful race.  Every time I run it, it still holds true.  There were times during the second mile that I questioned myself, “Am I going hard enough?” If I can ask that, then I think I must not be.  Yet it is tough enough and tiring enough that you’d rather just stop running altogether.  But I can’t.  I’m in a race.  When you’re running in a race by yourself though, it’s hard to give it all you’ve got.  I had a solid lead position for females and would only be able to hold my spot for third overall.  I was running against the clock, but while I had my stopwatch going, I didn’t know my pace.
It would have been nice to go sub-20 minute finally, but as I glanced at my watch and saw how far away the finish line was, I knew it would be tough to make it.  I finished in 20:14 – tying my 5K PR.  While it was a slight disappointment to not break 20, or even PR, I’m glad I could at least pull off the same time as last year, when I felt like I had a strong running season.  Andy finished in second, in a time of 19:19, only 3 seconds behind his PR that he set earlier this season.  While he would have liked to drop more time, he has been consistently quite a bit faster with the 5K this year and that’s impressive.
A lot of my family also came to the race.  My sister and her husband pushed their three boys, and my mom and niece also ran together (her first 5K – as an 11 year old!).  Baya also ran her first kid’s fun run afterwards as well.  This wasn’t a short little race either – it was 400m!  She was by far the youngest, shortest, slowest, and most side-tracked, but she still managed to eventually make it all the way around the track.  Her 2-year-old cousin Tyler had a very late start (we were the only ones left still going on the track), ran the whole thing non-stop, and even passed Baya before she reached the finish line.  What a little speedster!  All the other kids were long gone, but that’s ok.  You can’t win every race!
Posted by Jayme Wyss at 10:27 PM