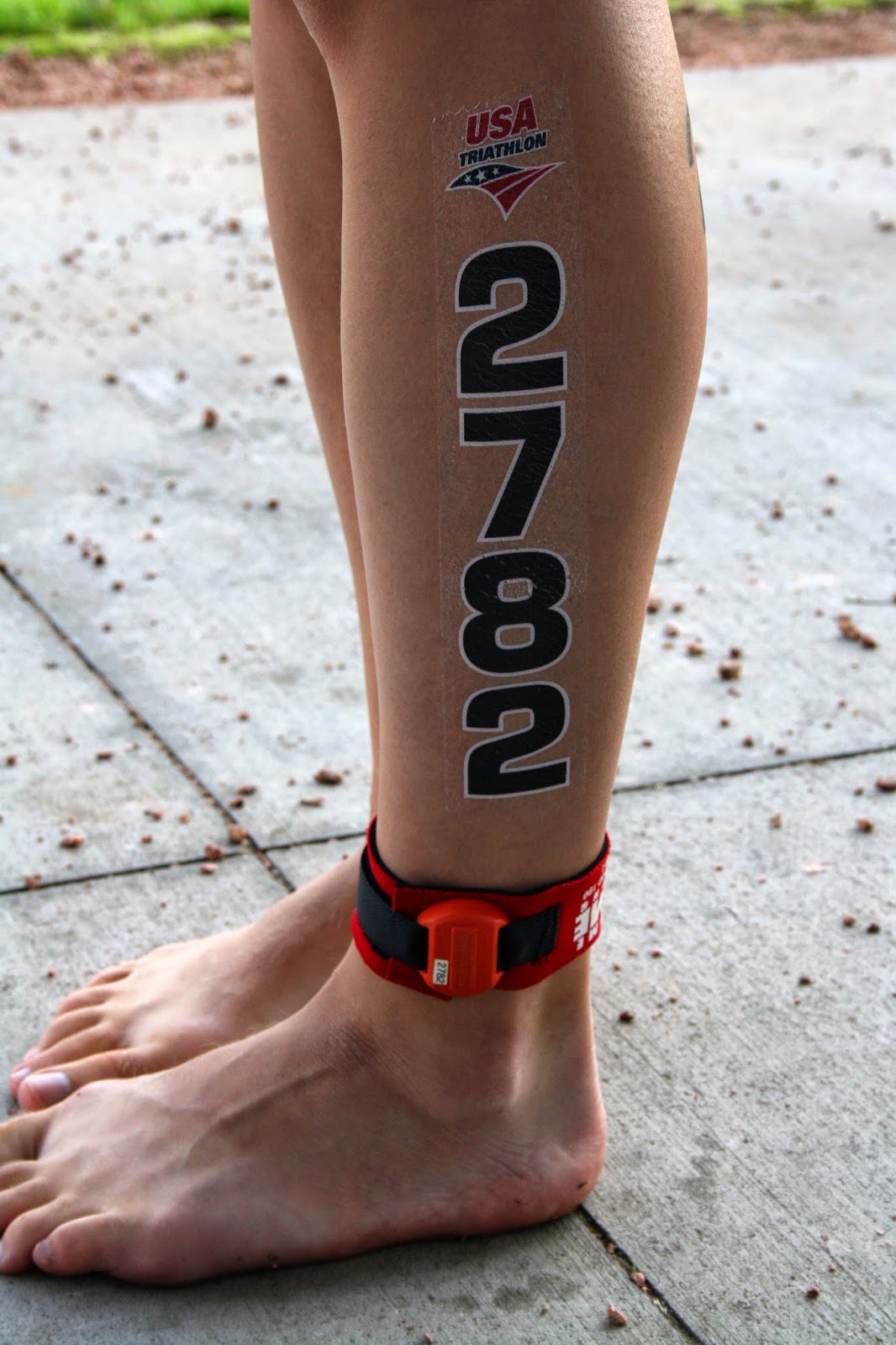 USAT Age Group Nationals (Olympic distance) took place in Milwaukee this year, which was fortunate for me since it made it fairly easy to drive to.  This was a race that competitors needed to qualify for in order to compete in.  In order to qualify, you had to finish in the top 10% of your age group at a USAT sanctioned race.  This was also a qualifying race for Team USA, which would compete in the Age Group World Championships in Chicago in 2015.  This will be the first time that it has been hosted in the US since 2005.  Normally the Top 18 in each Age Group qualifies for Team USA, however, since the US is hosting in 2015, each Age Group gets an extra 7 slots, meaning the Top 25 from each Age Group would qualify this year.  This all seemed too good to be true for me, that Nationals would be fairly local, there were more qualifying slots available, and that the World Championships would not only be in the US, but within driving distance as well!  Going into Nationals, my goal was to make the Top 25 and qualify for Team USA and compete in Chicago in 2015.  No pressure, eh?
Fortunately for me, the week leading into this race was filled with house projects, which helped to distract me at least a little bit from the upcoming big day.  The night before, however, was definitely a restless, anxious night.  We arrived down in Milwaukee on Friday afternoon to pick up my race packet and check in my bike.  We stayed with some of Andy’s family down in Racine (thanks Terri and Jerry!) the night before.  We put on my race tats and I covered my gear in their assigned stickers and numbers.  We got downtown in the morning just in time for me to set up my transition area before it closed at 7:30am.  Andy and I had lots of time to kill then, as my wave did not start until 9:18am!  I eventually warmed up and got my wetsuit on.  It was the least rushed warm-up I may have ever had.
The swim was in an inlet area of Lake Michigan, so while the water was cool (although up to 72 degrees, that is definitely not something I would want to be in without a wetsuit), it at least wasn’t really wavy.  After standing in a black wetsuit in the sun, the water temp actually felt really good.  We were able to warm up in an area about 15 minutes prior to our start time, then we were herded over to the in-water start corral area.  My wave consisted of females in my age group (25-29), and there were close to 130 of us.  Finally we started, and I tried to push my swim pace.  It felt like it was taking forever (the swim was just shy of a mile in length), but I thought I had decent positioning in my wave (not having a swim background amongst other former swimmers typically starts me at a deficit with ground to make up later on).  I came out of the water in 24:41, crushing my swim goal time of 26 minutes.


Going into this race, Andy said he felt pretty confident in me that I could make Top 25.  Then he counted those in my wave exiting out of the water and counted me at 42, leaving him feeling unsure of what would happen.  We had a long run from the water to the giant transition area (that hosted thousands of bikes).  I stripped off my wetsuit, put on my helmet and grabbed my bike.  This last week I decided to take cutting down my transition time very seriously and I practiced doing a flying mount and dismount with my bike shoes pre-clipped in and held in place with rubber bands.  Wise decision.  I skipped socks on the bike and I was able to fly through transition way faster than I otherwise would have. 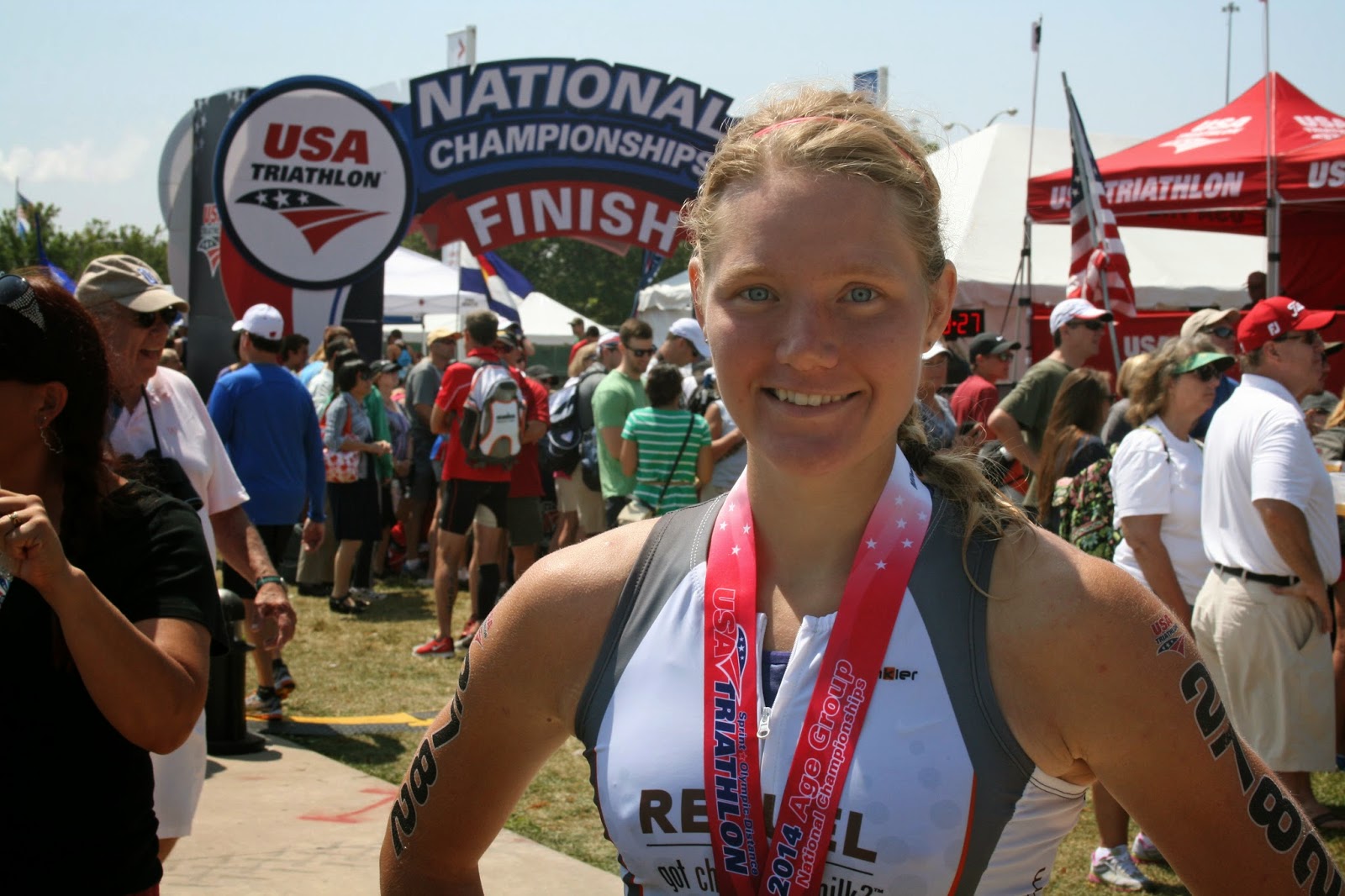 We biked north along Lake Michigan, past the gorgeous beach, and then did a U-turn and headed South past transition, over the long 794 bridge (which had been closed for the race) and beyond before hitting our 2nd U-turn and heading back to transition.  I came in only 39 seconds behind my goal time of 1:05 (22.7mph) for the 24.8 miles.  I can’t remember any women ever passing me, but I knew I had made up some ground on the bike course as I passed quite a few out there (later found out that I had the 6th fastest bike split in my AG).  Heading out to the 10K run course though, I had no idea what place I was in.  I swam and biked well, and I would just have to do what I could on the run and hope for the best.  After the swim exit, Andy said it was also too hard to keep straight who was in my wave and who wasn’t, so he didn’t know where I was at either. 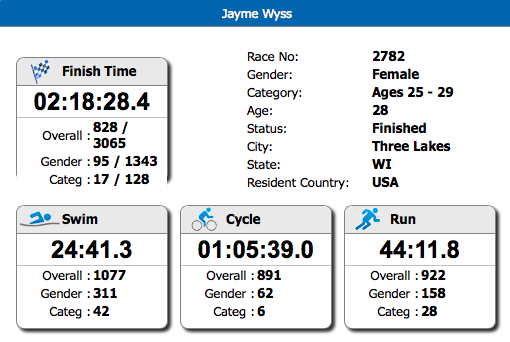 We ran north along a trail that was next to the Lake, and passed the marina.  While out there, I was passed by 6 in my age group and passed 2.  I was nervous.  I knew I was losing ground.  It was hot and sunny.  The surroundings were absolutely gorgeous, and there were a lot of fans along the course, but I was ready to be done.  I REALLY wanted to qualify, and I knew that my run has not been my strong suit this year.  I picked it up for the last couple of miles and tried to hold my position.  I hit the finish line and found Andy shortly after.  Neither of us knew how I placed yet, so we headed over to the expo area to get my results.  I got my print out, looked at my times, and then Andy pointed out that it had my unofficial placement on it: 18th – I did it!!!  (I didn’t even need those extra 7 slots of cushion).  I’m thankful for the smooth race, the beautiful venue, the support of family and friends (specifically Andy!), and for God giving me this opportunity and ability to race.  Here’s to Team USA and the 2015 World Championships in Chicago!