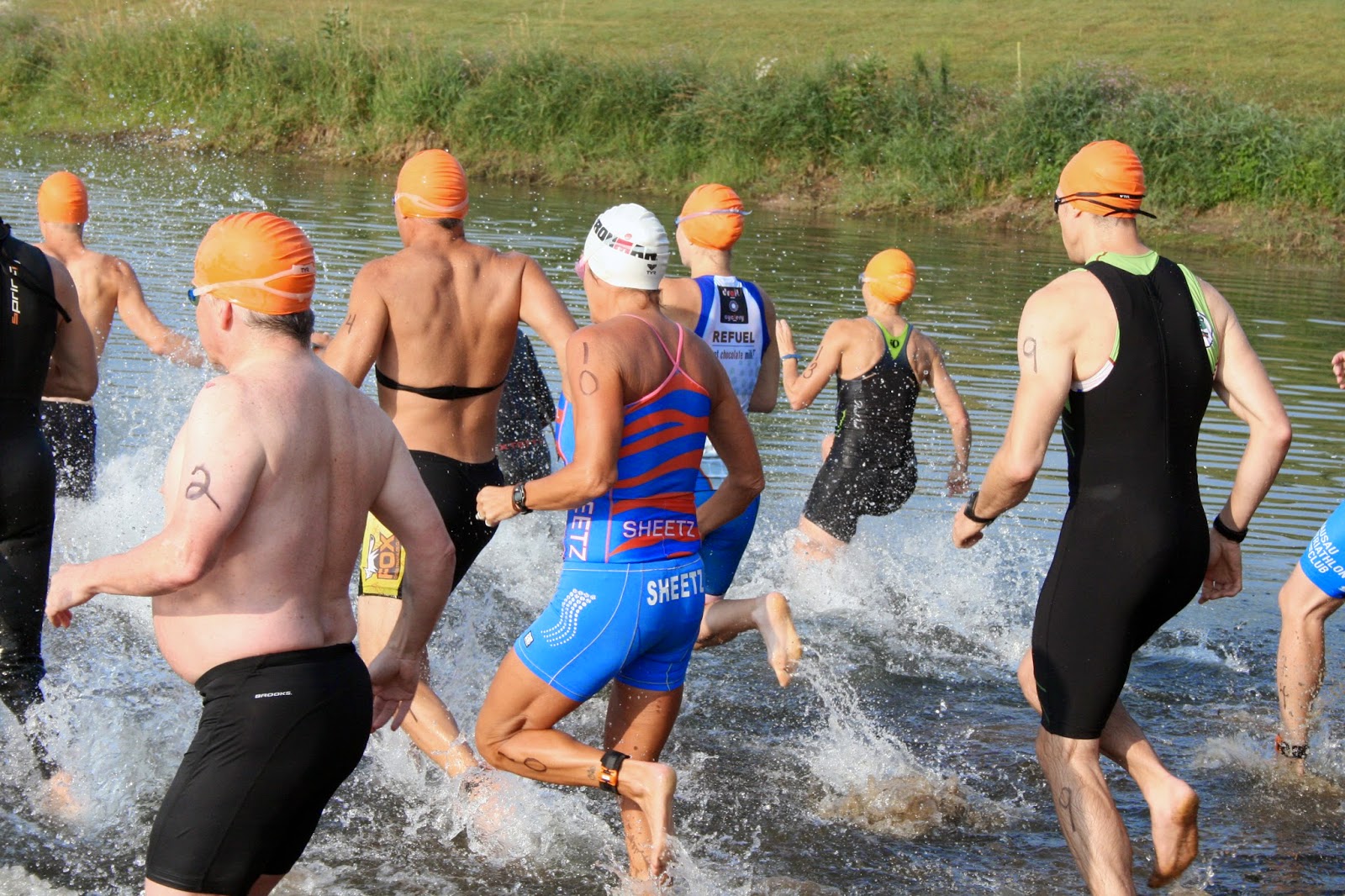 This was my fifth year racing the Wausau Triathlon, with the first time being in 2010 as my very first triathlon.  It’s always fun to come back and do this one every year, since it’s not only the place I started, but I also get to go back and see a lot of people I know.  This was also my first year racing it without Katherine though, and this season hasn’t been the same racing without her (she just had her first baby in June). 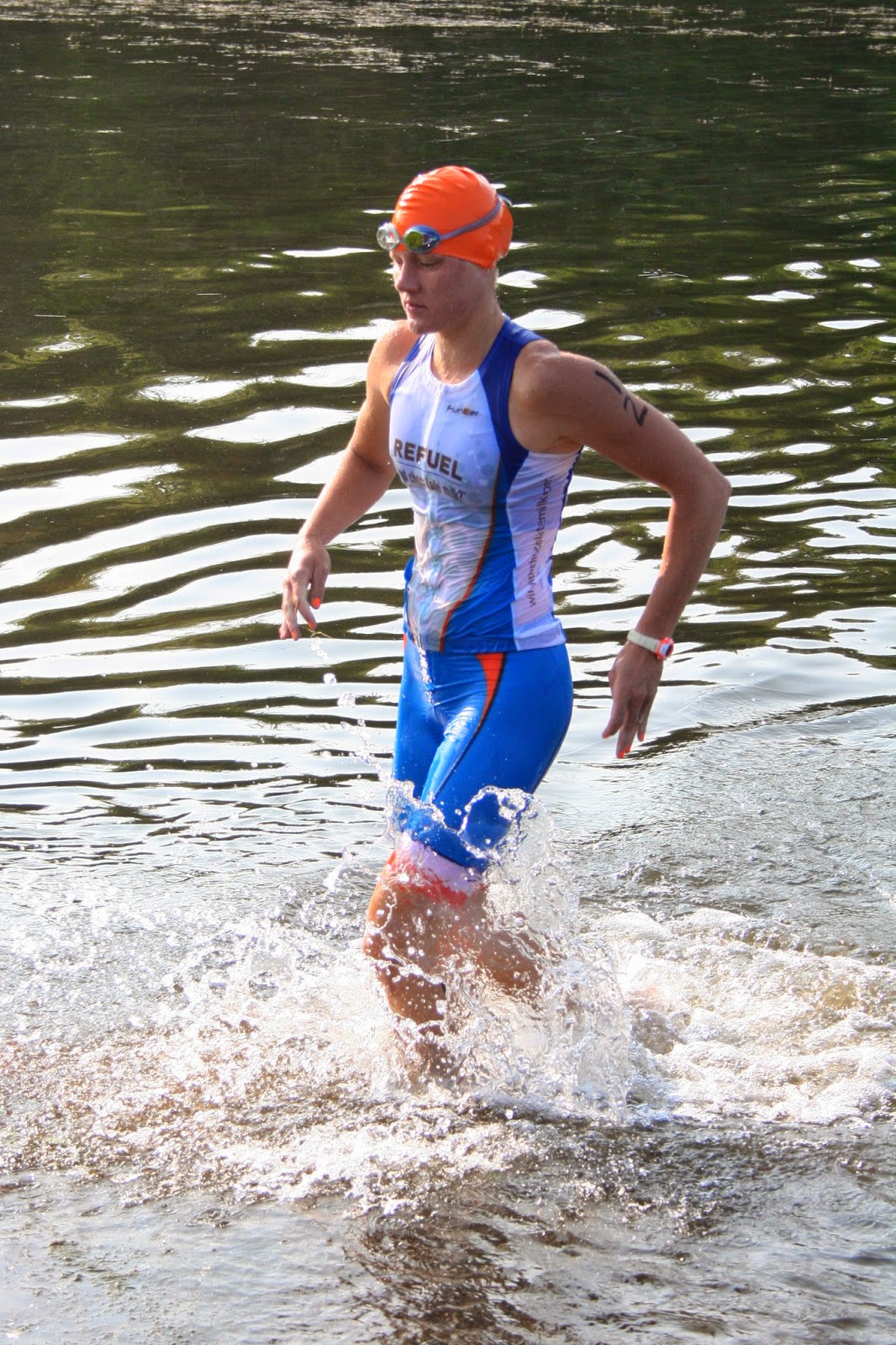 We got to my friend Katy’s to unpack for the night around 6:50pm, when I discovered that when I grabbed my front race wheel, I forgot to take the skewer from my training wheel.  A bit of panic, I must say!  Trek’s hours were until 7pm, so I rushed over and told them my dilemma.  Thankfully they lent me a skewer from one of their new bikes in stock to borrow for the race, for free.  That was so awesome of them – thank you, Trek!  I miss my old shop.
After a terrible night’s sleep, I biked over to the race in the morning.  The night before I also found out that wetsuits were being allowed for the swim.  Since this race has never allowed wetsuits, I hadn’t packed mine.  Apparently it was in the brochure that they MIGHT be allowed this year depending on the water temperature, but I missed that, as I was definitely not looking for it (nor was I even sent a brochure, even though I won the long course last year).  Fortunately, the two fast women that I knew I would have for competition did not wear wetsuits for the swim either.  I was thankful that I was not left at a disadvantage as a result. 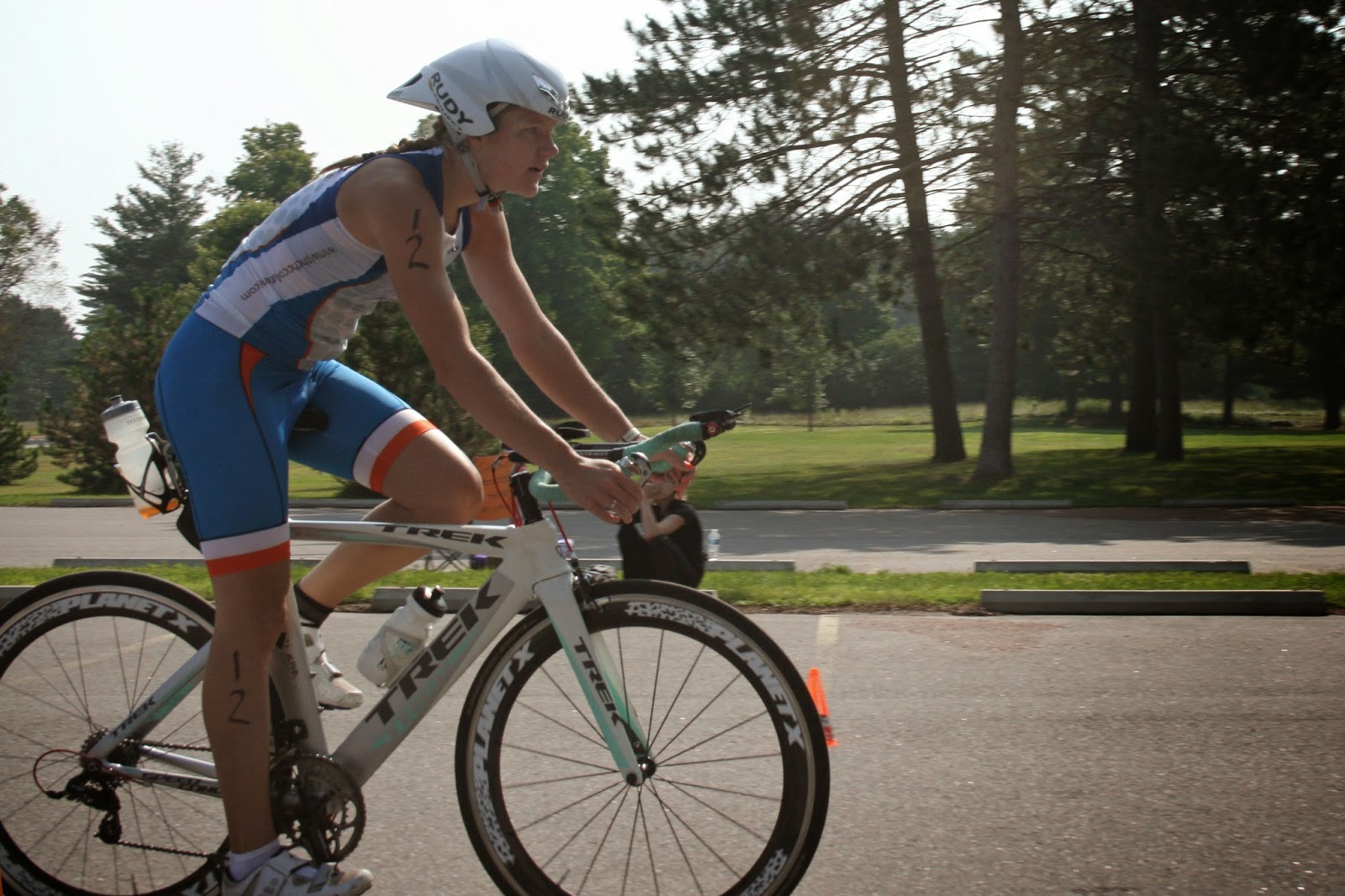 The swim was a minute slower than last year, even though I felt really good during it.  I followed Kim out of the water.  This would be a tough race.  I mounted my bike and before I even got out of the lot, I was almost hit by a vehicle.  Say WHAT?!  Yup, apparently someone in a big, black SUV thought it was an okay time to drive around.  They didn’t even see me, people were shouting at them, and I had to swerve my best to get around without being hit.  Fortunately they suddenly stopped, or else I really would have been hit. 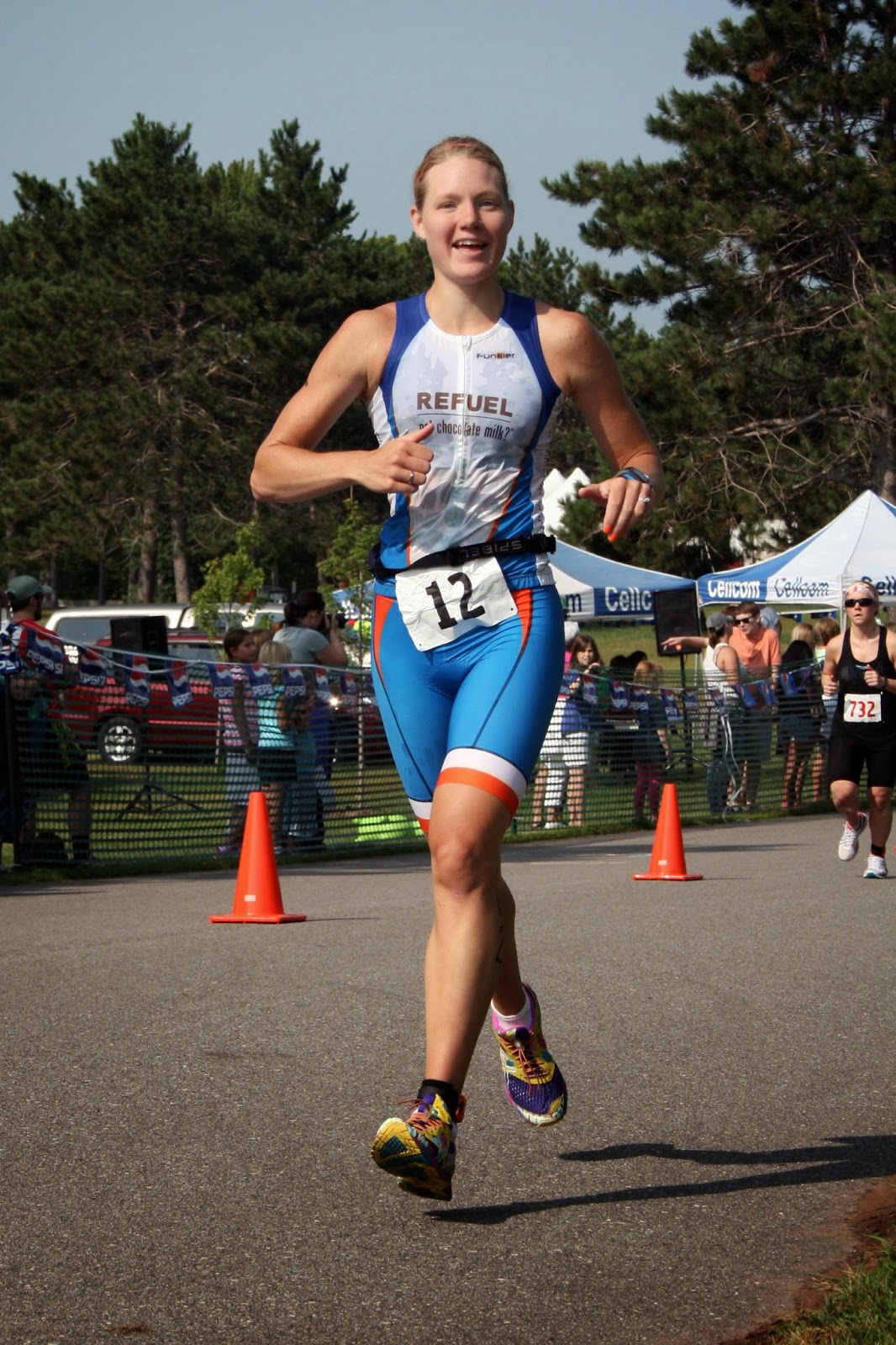 The first part of the bike route is flat and you’re able to cruise along pretty well.  I had Kim within my sight, but could not catch up to her until around 13 miles into the ride.  We played leapfrog for a bit before I was able to pull away and put some distance between us.  I had yet to see Tara, who I had battled it out on the bike with last year – a fast cyclist!  I worried that she was somewhere ahead of me yet, since I had a slow swim.  My bike also was not as fast as last year, despite there being little to no wind as a factor.  I came into T2 and headed out on the run.  It was a very hot, sunny run.  The run has a little loop in the parking lot before heading out of the park, and I saw Tara headed into the loop as I headed out.  I felt relief that at this point I should be in the lead for women.  Despite having a slow swim, Tara was still a minute behind me coming out of the water, same as last year.  This year though, I was the one with the fastest bike split!
We split from the short course runners, and eventually I could see the relays and lead men returning from the turn-around.  I hit the turn-around and it was confirmed I was in first.  I passed Tara and Kim after the turn-around.  I didn’t have a huge lead, but it was good enough that I wasn’t worried about pushing the run too hard.  Wausau was not about having super fast splits, I need to save that for next weekend at Nationals!  I had slower swim, bike, and run splits this year compared to last year, but I did what I had to do in order to get the Win this weekend.  I finished as the overall female winner for the second year in a row! 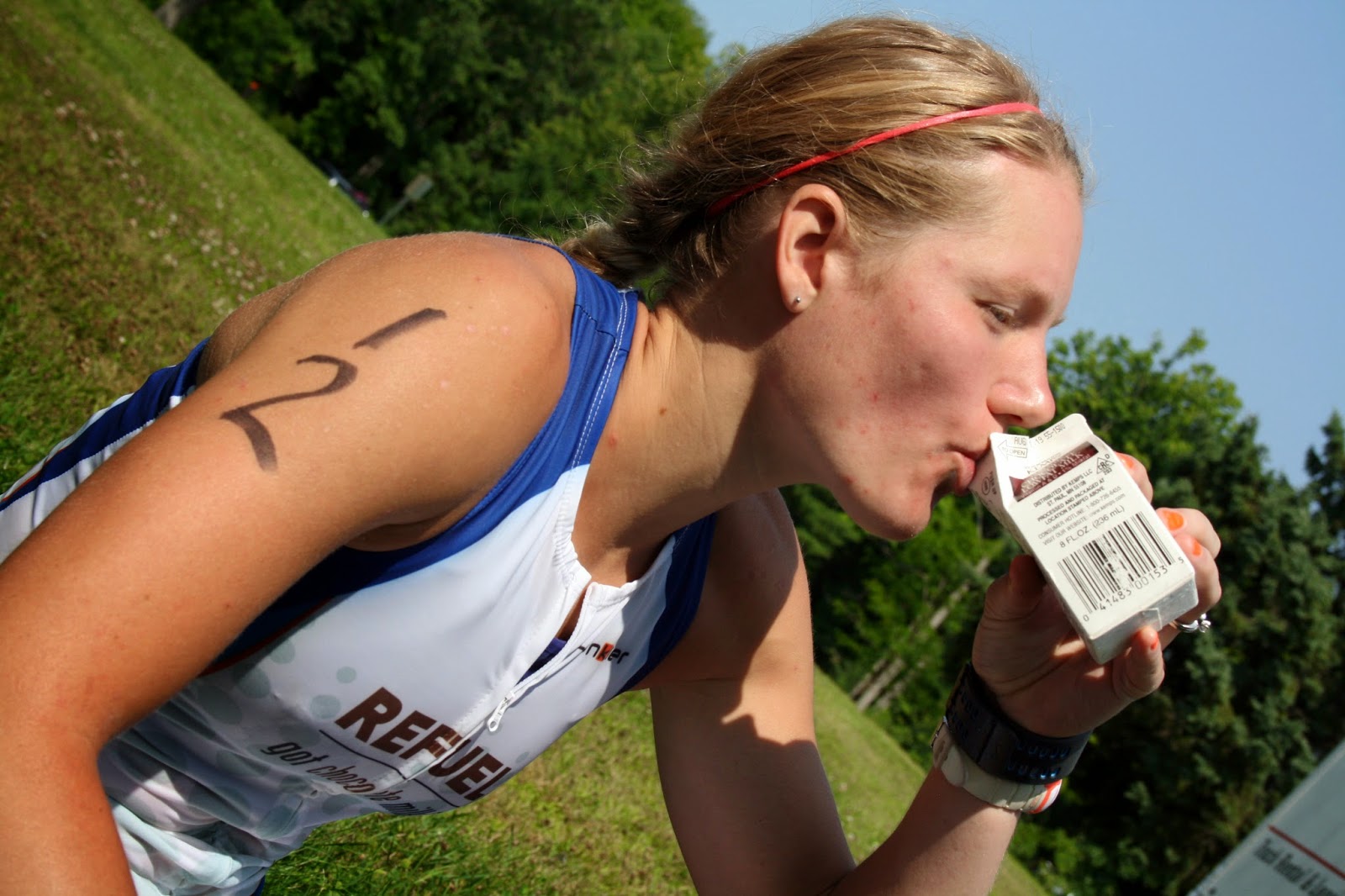 Not only was this race special because I finished as the back-to-back champion, but also because I had an awesome fan crew: our friends Katy and Dan Schield (fellow CU Trackster!), the Twietmeyer family, and my family of both Andy and Baya!  This was the only race she could be at this season, since it had a late enough race start for her.  It was also our 6-year Anniversary!  (Thanks for being willing to spend the morning at a race, Andy!)  Lucky me, I even got chocolate milk afterwards! 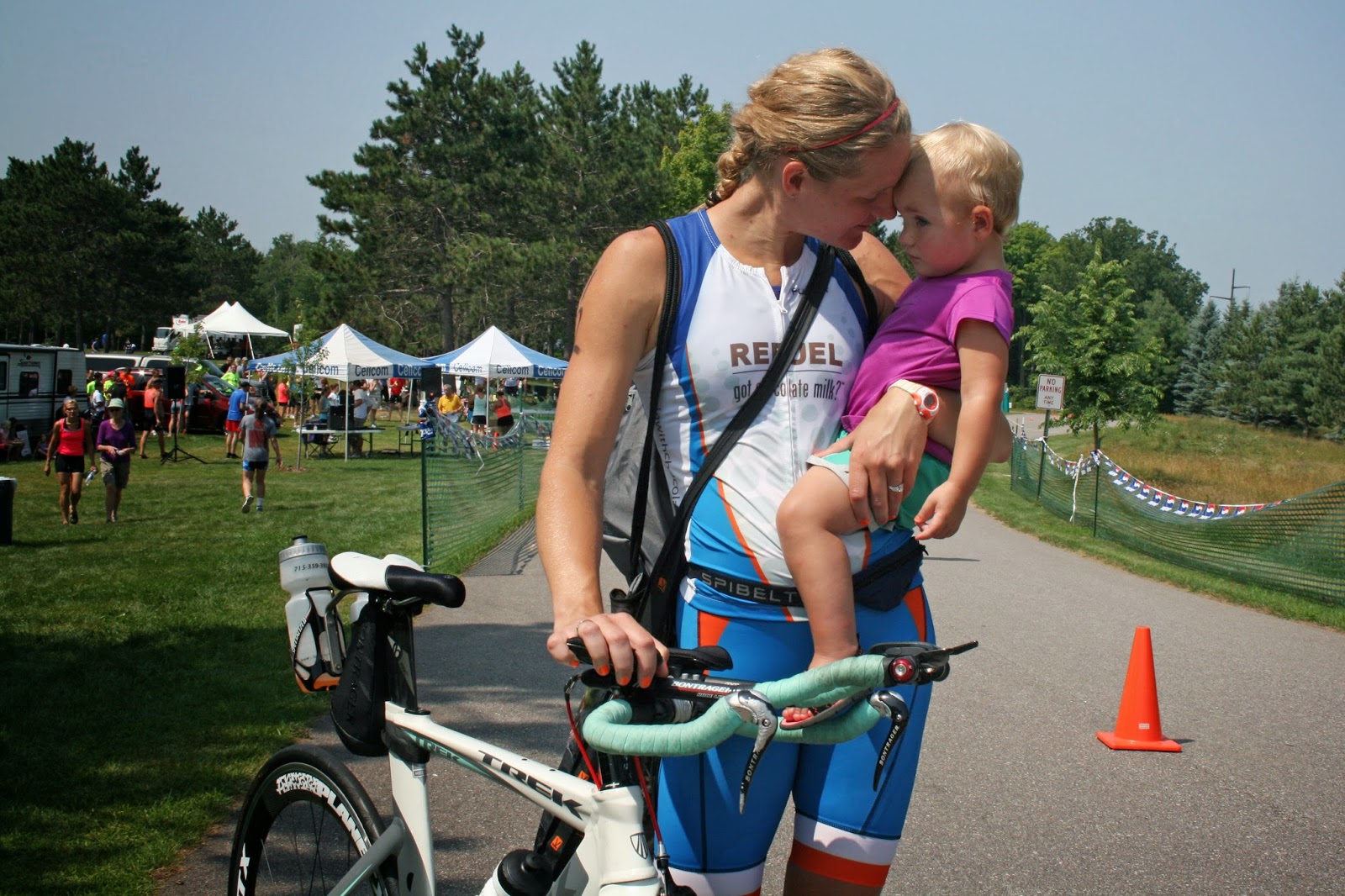