Is fast just a thing of the past?!

2013-2014 was my fastest bike splits in races.  2015 started strong after having Myles, but tanked after May when sleep (and any semblance of order in our lives) disappeared.  May 2015, I was KILLING it, churning out my best efforts in training rides, only to crumble when the season began.  I did a January-February bike block and was disheartened by the lack of improvement that I was hoping to find.  If anything, I felt like every ride was a struggle.  Again the question of , Will I ever be fast again? crept up and took root.  Am I not doing enough?  Do I need to do something differently?  I knew I needed to TRUST MY TRAINING but that can be hard to do at times.  My bike block ended in what felt like failure.  Until a couple weeks ago when I had a breakthrough session on the bike.  And then another.  And another.  Suddenly I felt like I was back on my game and now I hope to be where I was last May when I was at my fastest ever.  The improvements in swim and bike training sessions self-motivate me to keep getting after it. 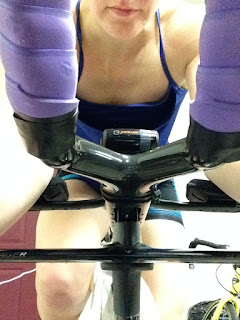 Here’s a glimpse of some of my favorite bike workouts that I’m currently doing.  They are based on % of FTP (the effort that you can hold for approximately an hour in a race).  Recovery is noted by parenthesis following the main set effort.  All of these should include a warm up and cool down, which will make them about an hour or so.
There is a fear that you may never be your best again.  But fast doesn’t have to be just a thing of the past.  I’m hoping that the 2016 season will prove it!
Posted by Jayme Wyss at 10:30 PM