I came down with a bad cold this week after lack of sleep (thanks, Myles), so I wasn’t sure how this race was going to go.  The weather ended up being perfect, and we got to the race plenty early enough to set up and get a good warm-up in.  The swim was beautiful, as the water was clean and calm.  I felt strong during it, but wasn’t sure what kind of pace I was pushing.  I came out of the water with one of my faster splits for a 1,500m swim and almost a minute faster than last year at this race!
This was my first race in a very long time that I would be racing by feel on the bike.  I wasn’t able to get my power meter working right before the race, so I had zero feedback via watts to tell me my effort, and just had basic speedometer feedback.  The bike was also 4 miles longer than a regular Olympic race, and the same distance as my longest training bike rides this season, so I was a bit nervous about it.  It was 2 laps, and as each lap progressed, I actually felt stronger.  I ended up only 18 seconds slower on the bike this year than last, but still had the fastest bike split for females, averaging 22mph.
The run course is nothing short of a challenge, and as I set out, I knew I didn’t have the pace I wanted in me.  In training, I’ve been able to run off the bike for 3-4 miles and feel comfortable at a 7:30 pace or faster and feel like I could have kept it up for a full 10K.  I struggled to hit 8 minute pace for my miles.  It is an out and back run, with the first mile running out being off-road and hilly.  Once you hit a road, you encounter long climbs with only one short flat section. 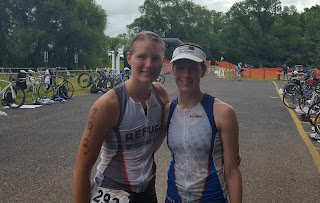 Less than 2 miles into the run, I was passed by a woman who was clipping along as I “trudged.”  Nearing the turn-around, she was the only female ahead of me, but there was another woman who was closing the gap on me.  First place was out of reach, but could I hold my position?  I feared not.  As we neared the last big climb before heading off-road on the return, the woman in third passed me and I watched her slip away from me.  Into the woods we went, and I thought our places were already determined at that point.  Then a man came running up behind me and as he passed, said, “Always finish strong.”  I thought, “I just want to finish.”  But I picked it up and told him I would try to keep pace with him.
Then we began closing the gap on the woman who passed me.  He said, “Go for it,” and I did.  We probably had at least half a mile left to go and I came up next to her, only to have her bolt away from me again and I couldn’t match her.  Again, I thought that was it.  She had a good lead again.  This is where it becomes just as much of a mind game as anything else.  This is where you find out what you are made of.  You have the choice to give up, or to dig deep and discover what is inside of you.  With less than .2 miles to go, I figured I could run hard for less than 2 minutes and gave it all I got.  I caught her with about 150 meters to go, and we raced.  I pulled ahead and beat her by 4 seconds to be the 2nd overall female finisher!
My run was terrible, but having a finish like that reminds me why I’m still doing this.  I ended up 43 seconds faster overall than last year, even though my run and bike were both a few seconds slower.  The biggest difference in how I felt walking away from the race between this year and last year?  The finish.  You’re not always going to have somebody run up alongside you and give you the encouragement (or the kick in the pants) that you need, but use it to fuel you when you do.  You’re not always going to have somebody there to duke it out with all the way to the finish line, but when you do, embrace the suffering that it takes in order to beat them.  Can the Graniteman theme, "Conquer Yourself," be any more appropriate?
Posted by Jayme Wyss at 1:41 PM