There has been frustrations with training and performance with triathlon, but there has just been a ton of fun with pole vault this year.  After having a blast at Badger State Games, and being told I could borrow UW-La Crosse’s poles again at the River Vault if I attended, I REALLY wanted a chance to compete at it.  In order to make my 3rd trip to La Crosse within 5 weeks possible, a lot of things had to fall in line.  I lucked out!
The River Vault is a street vault competition on a barge in La Crosse during their River Fest days.  The flights were divided by heights.  So there was an under-11 feet flight that took place before mine (11’-11’5”).  11’6” and up would take place the next day.  It was an absolutely beautiful, sunny day.  My early vaults just felt “off” and it took me a second attempt to make my opening height of 10’.  While it was still rough for a bit, I cleared 10’6” and 11’ and was ready for my chance at 11’6” (my goal of the day).  I made it!!

It has been 6 years since I vaulted in college, but also 5 years since I’ve ever even made 11’ (before this year).  By time I got to the higher heights, it also started feeling like things were clicking.  While I know there are plenty of things that I can improve upon, the vaults also felt really GOOD.  While 11’6” was my goal, and I would have been disappointed if I wouldn’t have made it, I also feel like vaulting is a lot more fun now that I am so removed from what should have been my best days.
12 feet was crazy.  I honestly didn’t think I would have a shot at it before that day.  First attempt wasn’t special, but the 2nd and 3rd attempts were ridiculously close.  One coach said, “That was the best vault I’ve seen all day.”  It certainly felt like one of my best vaults EVER.  We could buy a 4th attempt, and I did, and while it wasn’t as good of an attempt, the day was nothing short of being absolutely awesome.  Six years and 2 kids later and I’m back to chasing the elusive 12’. 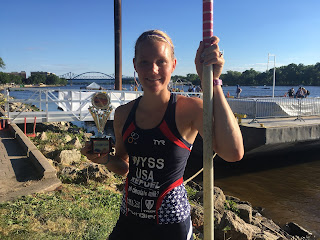 I didn’t win my flight, but I did win as a sub-master competitor (as I turn 30 this year).  I was told that in their 7 years of holding the River Vault, I am the first female sub-master to compete.  Earlier in the day, we watched a lot of older men vault, but it is hard to find women still vaulting after college, and especially after having kids.  To me, this is disappointing.  Ladies, keep having fun and chasing those dreams!  Don’t stop playing.
Posted by Jayme Wyss at 3:03 PM