Nebraksa: As Terrible as it Sounds

From start to finish, this was a frustrating and disappointing race.  For the past 2 years, Nationals in Milwaukee has been a highlight of my triathlon season.  Milwaukee was absolutely gorgeous, and was my favorite course.  The hype, the glam, and the fanfare was all top-notch.  The swim was cool and perfect.  The bike was rolling, but fast, and the run was a fantastic route alongside the harbor and boats, and the sandy beach.  Omaha was a giant letdown before the horn ever sounded to start the race.  The venue was located at a park, but in a run-down neighborhood.  Milwaukee showcased the best of what it had to offer, while Omaha shoved us in a ghetto corner of their city and tried to make it appear grand by having our run turn-around be around the ball field of the TD Ameritrade Park.

The swim was hot and we couldn’t wear wetsuits.  While I knew that would result in a slower swim time, I wasn’t anticipating looking at my watch and seeing it be THAT slow.  At least everyone was in the same boat, right?  Unbeknownst to me, I came out of the water in the same position that I have at past National races.  This was not going to be a fast day though.

The bike would have been fine, and I felt optimistic about it, until I hit that one enormous hill that killed all speed.  When I hit the turn-around, I counted myself to be around 20th, so I tried to stay optimistic.  Then I rode the brakes coming back down that giant hill because of the turn at the bottom.  The downhill is where I make up time and I just lost that edge.  I came to the dismount line with a terribly slow bike split and not eager for the run.  I did the flying dismount and my shoe came unhooked from my pedal and dropped on the road.  I had to turn back and grab it, almost dropped my bike, before heading into Transition.

I saw Andy shortly after the run began.  I didn’t feel a single bit of pep in my step.  I stopped at the fence next to him and broke to him that I didn’t want to do this; I wanted to be done.  It wasn’t fun doing triathlons anymore.  Oh yea, and I really had to pee and there was not a port a potty in sight!  I somehow had to compose myself so I could breathe while I attempted to run.  The run was a straight out-and-back through an industrial area.  We were able to view giant plastic barrels, rusted fences, old abandoned buildings, a gravel pile and rubble as we ran.  But not a single port a potty around.  Dang it, Omaha!
I would rather forget the race and pretend it never happened.  I would rather not think about how my run was the slowest ever since I started doing this (at least a full 6 minutes slower than last year).  I’ve been running 7:30 pace off the bike in training for 4 miles (or more), but I averaged 8:12 this year at Nationals.  My run alone made the difference between being somewhere around 11th, and where I ended up being – 29th.  The swim was my slowest ever, and I’ve been feeling confident about that lately.  The bike was pathetic for me.
Somewhere in all of it, I wonder if I really am that bad, or if it was just really a matter of me having given up.  I walk away from this race with a lot of regrets.  I didn’t fight for it.  I let the doubts and negativity get to me mentally and it became a self-fulfilling prophecy.  I can’t look in the mirror and tell myself that I did the best that I could that day.  Coming off the bike, I wasn’t far off from being an automatic qualifier for Team USA again.  But giving up happened long before that I think.  Before the horn sounded and we took our first swim stroke, I believed I wasn’t good enough.  And then I raced liked it. 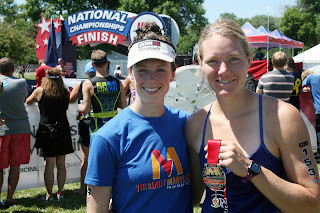 Thankfully, it doesn’t end quite there, as my best friend finally got to have her first experience at Nationals.  While she also experienced the same kind of slow swim, she did great on the bike, and pulled off a decent run to finish 32nd in her age group and beat my time by almost 30 seconds!  When we started triathlons, she was always beating me, but hasn’t done so since 2011.  Congratulations, Katherine, I couldn’t be more proud of all of your hard work and coming back so strong after having your second kid!