Find What You Love!

I still swim a little bit (1-3 times/week recently), but I hardly run or bike at all anymore, unless it is part of Crossfit’s Workout of the Day.  I have, however, been doing a lot of weight lifting and cross-country skiing (mostly with the kids).  I’ve been feeling fit and strong again as a result, and I’m having a ton of fun! 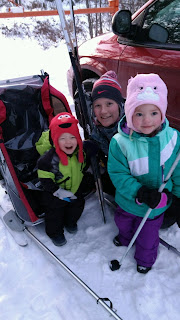 While winter was always my “off-season,” it was basically just a time for training blocks, so I’d still spend it hammering out swim, bike, and run workouts to prepare for the next triathlon season (pregnant or not).  This has definitely turned into a vastly different kind of winter, and I’ve been loving it!  Instead of being stuck indoors on the bike trainer, or running on the treadmill during the week, or in a pool, I’ve been getting out a LOT more! We finally got enough snow up here to start being able to play outside last weekend.  So Andy and I took the kids out on Saturday on a groomed trail.  There is also land nearby our place that is categorized as Managed Forest Land, which makes it public for non-motorized use, such as running, hiking, and skiing!  So now all I have to do is load up the kids and drive .8 miles for some private skiing out in the woods.
I ventured alone out there that Sunday, then took the kids with me Monday, Tuesday, Thursday, Friday, and Saturday, and did a couple solo ski times as well.  I have to make my own trails on it, so it can be hard going, especially after our last snow storm, but the more times I get out on it, the easier and more fun it becomes.  It’s been a phenomenal workout that has left me more exhausted than I originally anticipated.  Pulling the kids behind in the double chariot has been a lot easier than I thought it would be, in the sense that it is fairly comfortable, but it definitely adds to the workload and slows the pace!  I’m not in a race though, and if the kids stay in a good mood the whole time (even when it's 0 degrees out!), then it is definitely fun and worth being able to do it with them.
Looking to get in shape but hate running? Or are you injury-prone?  Try something new!  Most importantly, find something that you can LOVE doing!  Try a new hobby, or join a league, or find a way to get moving in the outdoors even in the winter!  I’ve read that some triathletes will even use cross-country skiing as an alternative to running during the winter months.  We’ll see how I fare with running on the other of all this after the next baby and track season springs upon us.  But I do know that skiing is something I look forward to, while I was just suffering through my last pregnancy runs because I felt I “had to.”  Enough of that!  Time to quit suffering and have some fun instead!
Posted by Jayme Wyss at 2:02 PM