With 3 weeks to go until the due date, things are going surprisingly really well.  The only complaint is heartburn, but between maximum strength acid controller and Tums, it’s at least been manageable.  That’s it for complaints.  I can’t complain about that!  At my last doctor appointment, I was told I was ready to go at any point.  That was exactly what I wanted to hear at this point in the last two pregnancies.  This time around, I had two thoughts.  The first being: after my experience with Myles and having the doctor tell me I was “ready” for the last month and then going overdue by 5 days, I fully anticipate being pregnant until at least my due date.  Second: I’m NOT ready!  We have 3 weeks until track season starts, which means I basically have only 3 weeks left of winter fun!  I can’t have that time cut short! 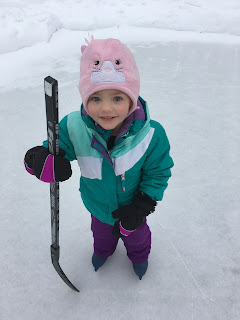 This has been the year that I have fully embraced winter, and I’m loving every bit of it!  When you live in the Northwoods of Wisconsin, this is the best route to go.  It’s been crazy weather this winter, with late December rain, a foot of snow dumped on us, a two-week long January thaw, and then a wintry mix last week, the snow and ice conditions have been turbulent at times.  I’ve still managed to get out on the skis at LEAST 3 times/week (but often times much more than that).  We have our own ice rink on the lake this year, and Baya and I have gone ice-skating a bunch of times, and she has started skating on her own!  I have 2 kids who have come to love being outside in the snow as well, as Baya says, “I love winter!”

When it nears the end of pregnancy, there comes a point at which the woman is just tired of being pregnant and ready to get the labor and delivery over with.  I guess I can handle going full-term this time around as I am NOT at that point!  I feel great, and despite not doing much for swimming, running, or biking, I feel in great shape from weight lifting, crossfit-style workouts, and cross country skiing.  In fact, this is the first pregnancy where at more than 8 months along, I feel strong and even skinny still somehow!  Recent runs that I have done, I also feel really good about, like I will be able to come back from pregnancy better as time off has served me well and skiing has stretched and strengthened me in much needed ways.  I have even attained new lifetime PR’s in all lifts (yes, while pregnant!): back squat (185), bench press (135), power clean (120), deadlift (215), front squat (150), and incline bench (120). 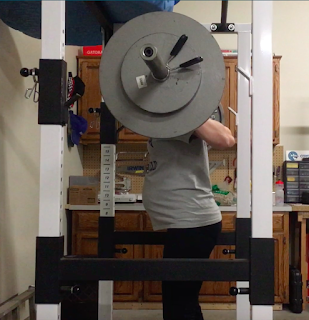 The forecast looks great for being outside for some skiing and skating for the next week or so, and I actually hope I don’t have to miss out on any of it.  So I’m okay settling in for a bit longer – I’m just having way too much fun!