Badger State was my first competition back this time around.  Being that there was a high probability of being the only female in my age group, I signed up for 4 events to try and bring home 4 gold medals.  I signed up for shot, long jump, pole vault, and the 200m dash.  Last year I did pole vault, long jump, and the 800m run and did really well in all three.  This year I had a goal for each event, and fell short on every one of them!  But I honestly had so much fun being there and competing, that in the grand scheme, it didn’t really matter.  Isn’t that what it is supposed to be all about anyway?  I’m super competitive (in case you couldn’t tell), but I had FUN!

I threw shot freshman year of college for the pentathlon.  I think I threw about 29 feet back then.  I’m a lot stronger now, and have learned a lot more about technique (even though I don’t really ever throw), but I was shooting for a goal of 30 feet.  I threw 28’3”.  But I won gold!  I then went over to long jump.  Last year I jumped 14’1”, so this year I was shooting for 14’ still.  Being how hard it has been in coming back from this third kid, I probably should have lowered my standards more.  I jumped 13’8” and won gold again.  Warm-ups were phenomenal with pole vault.  I felt fast and got on big poles like last year.  I cleared a bungee clean in warm ups, and then afterwards found out it was 11’, which was my goal for the day.  I threw and long jumped before I came in at my height for pole vault though, and I could tell my legs were already feeling zapped.  I managed 10’ and 10’6”, but unfortunately didn’t make 11’.  Last year I long jumped before I pole vaulted as well, but I had a lot more stamina last year with triathlon training.  My legs couldn’t handle it this year.  I actually was 2nd overall again like last year and won gold for my age group.  I feel really good about how warm-ups went though, and so I’m optimistic moving forward.  The 200m dash was just for kicks.  While I started “ahead” since I was in lane 8, I was left behind by time I got halfway through the curve!  Welp, it’s all in fun.  I ran a high 32, while my heat was won with a 26.  Yikes!  It was my last competition of the day for me, and also my 4th gold. 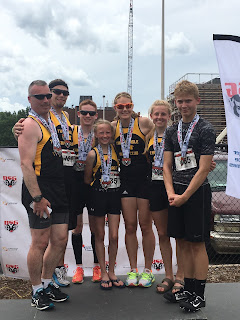 This year I formed the Three Eagle Track Club, and there were 6 of us down there representing the Club.  It was a lot of fun sharing in the day with my teammates, who also brought home a lot of bling.  This was Andy’s first track meet since the conference meet his senior year in college.  He ran the 100m and 200m, and did the long and triple jump.  He hung with the college kids in the races (impressive!), and surpassed his 18’ goal by long jumping 18’5”!  He has been super nervous about ever triple jumping again since his final jump as a collegiate athlete was his best ever.  He also used to battle injuries from jumping.  He was hoping to jump at least 38’ and ended up breaking 40’ with a 40’4” jump!  He is still suffering from the consequences of the injuries flaring back up again from jumping though.  Super unfortunate.  Being able to share in the day of competition with him was the best though!  We have never done triathlons together, but we’ve always had track. <3 It was great to be back!
Posted by Jayme Wyss at 12:03 PM