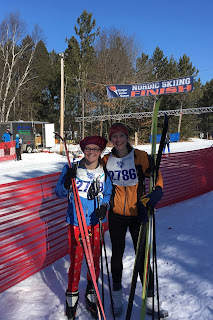 Rachael and I arrived at Nine Mile only 15 minutes before our race was set to start after being delayed that morning.  We quick picked up our shirts and bibs, had a bathroom break, ran shirts back to the vehicle, and put our skis on for the very first time ever, with only 3 minutes to spare before the 21K classic was starting! Crazy!
My first fall was just after we got started, which was followed by many more (at least TWELVE to be more precise)! We also missed a turn at the bottom of a hill (it was poorly marked). We would have had really fast times if it weren’t for all those delays! The course was really icy and scary even.  In fact, when I saw a caution sign at the top of one hill, a lady, who was an experienced skier, suggested taking off our skis and carrying them down the hill – and that’s exactly what I did! I had no advantage (except that I didn’t die at the bottom) so I hope that wasn’t breaking any rules. Prior to that hill, I had a couple really bad wipeouts, one in which I think I left some skin behind on the icy trail.  I was hurting so bad at that point, that I was terrified of the downhills! 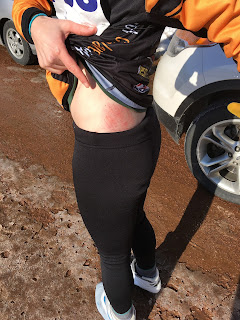 Going up the hills was a struggle and we got worked.  It was a lot of upper body.  The second half of the course was less intense and the flatter sections with gentler hills were actually a lot of fun.  All of the big hills seemed to always have a sharp turn at the bottom of them too. The race was a lot more technical, and slick, than I was anticipating.
All of my training had been on waxless skis on non-groomed trails, which was pretty slow going and much more controlled.  This was nothing like that! We borrowed wax skis. The course was groomed with big hills, and it was warm the previous day, which iced everything over.  It was a completely different ball game.  We did really well though and ended up 5th and 6th overall (I was 3rd in my age group and Rachael was 1st in hers)! There were a lot of laughs, bruises, and exhaustion, but it was a worthwhile experience.  As Rachael put it, “It’s great to do something with the goal of just finishing!” My body is in a great deal of pain but the memories and laughs will outlast that. 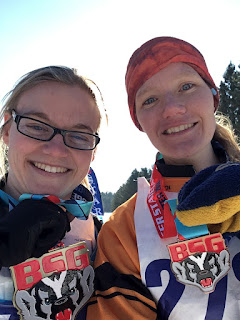