Last summer I formed the Three Eagle Track Club, and as a Club we host two summer track meets. July 30 wrapped up our Club season with our final meet, and it was our largest one yet! The June meet was a mere two days after the half-iron triathlon, so while I vaulted, I only managed to clear 10-6, and I partook in a 4x4 Coaches relay team for fun. This time was even more fun, and I was much more prepared and rested for it. 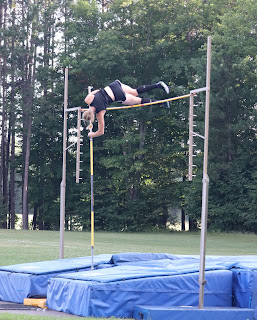 I made my opening height on my first messy attempt. At 10-6, a cross wind had moved in, and I forced myself to commit to it and finally made it on my third attempt. At this point, I was getting pretty frustrated, as I had spent multiple practices out there by myself in order to try to keep vaulting at least once per week. And then it wasn’t going well at all! I made 11 feet on my first attempt, and then I made 11-6!! I had solid clearance on it and didn’t even brush the bar, which is better than when I made the height the last two summers! I was so astonished that I had to double-check the standards to make sure I had it at the right height! I’ll be really jacked about that make for a long time. I was disappointed that I hadn’t made 11-6 at the River Vault, and I assumed that I had missed my shot at it for the summer. (Keep mind that my best in college was 11-10.)
I finished vaulting in time to go over to the track and hop in for the 800m run. I was well trained for a distance race, but it is fun to go short and hard sometimes. My PR was 2:46 and I tied it! I was definitely able to end the summer track season on a high note. Too bad I didn’t get that vault on video though!