Seven weeks after giving birth to Baya in 2013, I ran a big 5K PR of 20:14. 2013 was a fast year for me, and I only hit that time one other time. After I gave birth to Rowyn in 2017, my hemoglobin and iron had dropped drastically, and I spent 5 weeks getting weekly iron transfusions. I thought I would never run fast again, or compete in a running race. I thought I would never run more than 3 miles again! Fast forward to this summer, and I won the High Cliff half-iron triathlon (a definite shift). In August, I ran a timed mile in 5:57 (a 2-second PR). I got the itch to run a 5K again. Could I break 20 minutes?

I ran the Three Eagle 5K this past weekend. I say this in context because it has been a long journey. Sometimes you are sitting at the bottom and you don’t even want to try getting up again. But slowly, and surely, something still stirred within me. The desire to push my limits to see what I am capable of – never died when I was sitting at the bottom. It makes every climb back up all the more victorious though. 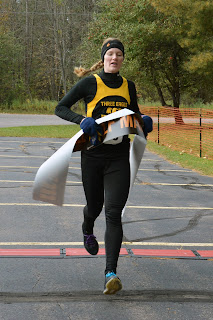 Life has been busy with volleyball, and relishing the family time I do get, so I didn’t pursue any other 5K’s. That, and I knew ours (I’m the Race Director if you don’t know) would be a flat and beautiful course. I had a time goal going into it, not a placement goal. You never know who will show up on race day, after all – that is outside of your control. The question persisted – could I break 20 minutes? That would be a significant time drop, but worth the pursuit. You can’t succeed without risking failure. So I risked it. I lined up at the front on that crisp morning, and I risked missing my goal.
We started off too fast of course, and I told our young starling of a runner so. At that point, our male state athlete was long gone ahead of us, and there was only one gentleman still ahead of us. A lady then pulled up beside us and I realized that at that point we had (naturally) fallen off our pace to being too slow. I picked it up and left everyone with me behind. I was racing the clock at that point anyway. Glancing up, the trail was the most beautiful tunnel of fall colors. I watched my pace and tried to push. After the final turn, I knew I would not break 20 minutes on that day, but I was very close to my PR time. With a final push, I came in with a 1 second PR of 20:13, and ended up being the 1st female overall, and 2nd overall finisher. It was worth the risk. And somehow, 5.5 years and 2 more kids later, I am just as fast as I once was. I didn’t break 20 minutes, but I gained a lot – a renewed belief in myself, and hunger to see what else I’ve got in me.
Posted by Jayme Wyss at 9:19 PM