After such a great time at the USATF WI meet, I decided to squeeze one more meet in for this indoor season. There was an all-comers meet hosted at Bethel University, and while that’s a solid 4 hour drive, it’s also where I spent a year training during my internship year, which added to the appeal with a return to the old stomping grounds. It took a few days to recover from the last meet, but now that I had a recent meet experience under my belt, I was hopeful that I could turn up similar results again.
It was a large field, with 20 total vaulters, and the entire meet was run co-ed. Despite the long line for warm-ups, I felt good going into competition. I cleared 10’ and 10’6” on my first attempts. Mentally, I was already happy with how I was doing, even though I knew I wanted more from the day yet. I made 11’ on my second attempt, and got some decent height on my 11’6” jump, with plenty of room on top, and while I bumped it on my way down, the bar stayed up! Alright, I’ll be honest. It was actually in metric at 3.50 meters, which puts it 11’5.75”, but close enough! February 6, 2010 – My one and only other meet I ever had at Bethel. I was a senior at Concordia. I won the pole vault with a vault of 3.50 meters as well! Here I am 9 years and 3 kids later, and I just jumped at the same place with the same height. I ended 4th overall and 2nd female. 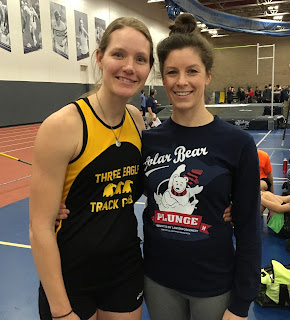 This really shows that what I’ve been doing in the weight room has done wonders! Triathlon is still on the fence a little bit for this summer, but I do know for sure I will be shooting for a new lifetime PR of finally clearing the elusive 12 foot bar! Other fun highlights from the day included dropping 4 seconds from my 800m time for a 2:47.62, in a very large heat of 16 athletes. My state miler, a senior this year, also ran a 4:48 mile and followed it with a 2:11 in the 800m. He will be starting this season off fast. Since this meet was in the Twin Cities area, I also had fans, which included Andy’s family, and my dear friend (and also a former Golden Bear trackster), Katherine, who will hopefully be re-entering the track scene with me next year! Now the tough part will be waiting 4 months to finally compete again!