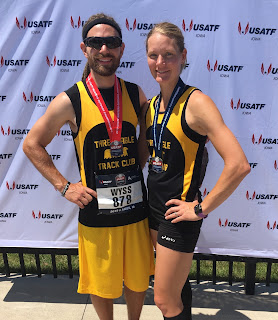 Andy and I traveled down to Ames, IA to take part in the Masters National Championships this past weekend. The meet actually takes place over the course of 4 days, but since our main events (pole vault and triple jump) both took place on Sunday for us, we just competed in one event each. The forecast had a high of over 90 degrees, full sun, and very humid. All of the women actually competed together, versus being split into two flights, so there were 20 of us competing together! I was the youngest at 32, and the famous 85-year old Flo was the oldest of the group. The line was pretty long for warm-ups, but staying warm wasn’t tough when it was so steamy out.
Based on how pole vault at the decathlon played out, I knew I would have a very long wait to get through the lower heights until I would come in. After my warm-ups, I was able to go watch Andy triple jump. He was having a frustrating day, especially when his best jump was a scratch. He still broke 40’ and took second in his age group behind a pretty elite triple jumper. 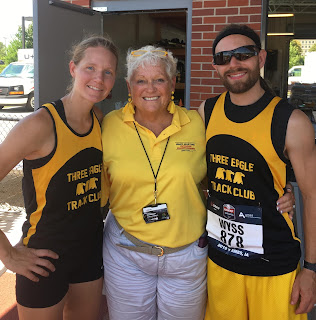 After waiting for well over 2 hours, the final pole-vaulter went out, and I was able to do one run through before moving the bar up to 3.20 meters (roughly 10-4). I cleared it and passed to 3.40, then 3.50 (11-2 and 11-6). While I wanted to clear 12’ again, I really didn’t want to end at just 11-6 again. We put it at 3.61 meters (11-10), which was my college PR, and I cleared it! Deciding to go for a PR, we moved it to 12-1.25, and I missed. It would have been great to PR again, but I feel great about tying my second best jump, and being consistent at the higher heights this year. Going into this, I was also a little nervous how it would go after sitting for a couple hours, and then competing by myself. I had a lot of fun, and definitely had a lot of adrenaline going, as I was gripping at my highest, and on my biggest pole – and with the standards pushed back.
We had a fun surprise with Mrs. Z (now Mrs. Messenger) working the meet, too! She was our elementary art teacher, and we usually get the treat of seeing her at the WI State Track & Field meet, as she officiates that big meet as well. There was also a group of women that pole vaulted that I also did the decathlon with back in June. It’s always fun seeing familiar faces! Andy and I competed under the Three Eagle Track Club, and as a Club Team, we ended up 61 of 115 Club Teams. Pretty cool!