People usually put in their 2 weeks notice when they are about to quit something. Instead, I had 2 weeks notice for starting something. This Saturday, I will be competing at the USA Triathlon National Championships in Cleveland, Ohio. I will have roughly two weeks of training under my belt for it (including a couple days of taper for a track meet in there!).

So what’s the story behind it? I qualified for Nationals with the High Cliff half-iron distance race that I did last summer (and somehow won!). Since our good friend, Rob, is from Cleveland and it qualifies for World’s in Canada, I originally thought I would compete at it this year. I started training 6 months ago (a logical time to start training for a big race). Shortly after, I was feeling defeated and overwhelmed with trying to balance everything. I told Andy that I decided I wasn’t going to race Nationals. He replied that I could probably do just fine without even training for it. I told him that I would not do that kind of thing. 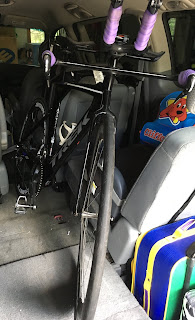 A couple weeks ago, USAT announced the location of Nationals for the next 2 years – a return to Milwaukee! I raced at Nationals in Milwaukee in 2014 and 2015, when I qualified for Team USA for Chicago and Cozumel. It has been one of my all-time favorite triathlon courses. I was originally anticipating that Nationals would be far away, and so I was prepared to give a longer break to triathlons altogether. With the location announcement also came another announcement – qualification criteria for next year’s Nationals in Milwaukee would be waived for participants of this year’s Nationals. And here I go! I don’t have to worry about qualifying at a race next year in order to compete at Milwaukee. I have the added bonus of this being a no-pressure race. I biked 4 times and swam a handful of times in order to prepare for this. Good thing I had at least some running under my belt, although I have done minimal distance work since June.
So instead of packing poles, I am packing my bike for this weekend! Wish me luck!
Posted by Jayme Wyss at 2:02 PM