I have been slow to write during this time because the last thing I want to do is write something related to COVID-19. I hate to even mention it. Yes, life has changed. That’s not news. Andy and I are high school track coaches who lost the spring season, and our very real chance at having a shot at winning a State Title as a team. There have been all the emotions in our house. There’s the question of when things will be “normal” again. Spring races have been canceled. Early summer races have been canceled. Will I be able to compete this year even? There’s been a lot of speculation but nobody really knows. Triathlon Nationals aren’t until August, but as it draws thousands of people from all over the country – what are the chances of that happening? I’ve had a hard time getting on my bike yet as a result.
As far as summer track meets, I am guessing that the 2 competitions I was planning on won’t happen. Right now, WIAA is now allowing us the month of July for track practice and competition. I can’t even pull out a pit prior to that since school facilities have been closed until the end of June. One month. Much better than nothing, which I have been afraid of, so I am trying to keep my hopes up. We are designing it to be a cross between an abbreviated, rough version of a high school season, and summer Club season, so the meets would be open to all ages. We are also well aware that we could end up losing that as well, but for the time being, it gives us hope, and we could all use more of that.

I did get in two indoor meets (without practices) and an indoor triathlon, so if all else, fails, I am glad I got that little bit in during 2020. My goal the last several years was to hit 11-6 (and 12 last year), and while I would be left short of that for this year, I at least broke 11 feet both times and went 1 and 2 at the college meets (almost made 11-10 in the video below!). The indoor triathlon was a fun challenge and maybe we could even get another one scheduled before the close of the year.

I am thankful for the things we do have during this time – the extra time with the kids when I would normally have been gone a lot with the season. I’ve still been running (got a treadmill for Christmas!) and lifting weights. We have a big house to move in and space outside. Homeschooling started when it was still winter here and we got in extra skating, tubing, and exploring. Spring came and I resumed a project I had started at the end of volleyball season – clearing an area of our land of trees (So. Many. Trees!) to be turned into a large open yard. I just finished cutting and cleaning up the area and now we wait for excavation to start! The boys liked to come out and “cut” down trees with their chainsaws too. For the time being, it gave me something to focus on when everything else was being taken away. It gave me purpose and at the end of the day, I could feel like I accomplished something (like my farming days). 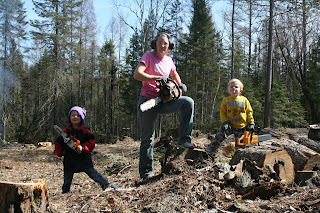 There’s the struggle with identity as being coaches and athletes without our sports. While I take comfort of knowing my identity truly lies in Christ, there’s still much sadness with all that has been lost. Athletes of all levels, all the way up to Olympians, are feeling it. All you can do is try to stay positive, make the best of things, and remember that this too shall pass. When all hope feels lost, there’s still hope in our Risen Lord. Praise. Jesus.
Posted by Jayme Wyss at 1:16 PM