I have been writing workouts for my high school distance and mid-distance runners. With having our spring season canceled and hopefully getting July to compete locally instead, we focused on building mileage for the past four weeks and I did it along with them. Prior to the build, I was typically running 24-26 miles per week. That mileage was manageable to juggle with home-schooling and little kids so I was a bit nervous about the undertaking of trying to fit in 40 miles in a week for the final week. I have not run that many miles since 2013!

Taking things one week at a time was definitely helpful. Even thinking two weeks ahead was overwhelming. I tried to keep lifting 3 times per week, and I also added in one short, hard bike ride per week. On Mondays, I did an aerobic run, followed by two recovery runs, and then on Thursdays I kept doing my threshold run, though it dropped in distance from 4 miles to 3 miles during the build. Friday was another recovery run and Saturday I would do a long, easy pace run. Some days, I felt fatigued, and other days I felt really strong. My body adapted REALLY well to the build though! My last run was 10.4 miles and I was able to comfortably pick up the pace at the end. I never anticipated that I would feel that good!
I was also nervous about how my hip would fare. Over the winter, I had been dealing with pain in my left hip that would prevent me from running some days, and at its worst, I could even feel it when I walked. I am always nervous about getting a career-ending injury and I was even concerned this may have been arthritis already! I tried multiple methods that did not seem to help it improve. Then I started focusing on stabilizing that hip by strengthening the muscles around it. I was diligently doing single leg exercises for it every time I lifted. My self-diagnosis is that I had a weak left glute. It was even affecting my squat form when I was doing heavier weights. My form has since corrected as well now and the week I hit 40 miles, I experienced zero complaints from my hip!
In my last post, I also mentioned the yard project I have been doing. I cleared all the trees and the land was excavated. Then the most recent aspect of the project has been building a sand pit/box. I missed two of my lifting days as a result during my 40-mile week, but I still did more than enough digging, lifting, and hauling! I record these extra, strenuous tasks in my training log so when I look back, I can understand why I didn’t get something done, or maybe my performance in a workout was affected. 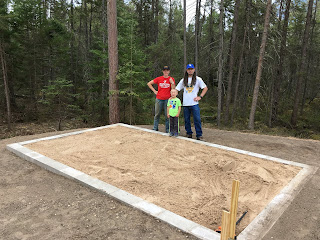 Perhaps this year I will not get to compete at all. That would be a huge letdown, but I would not regret the time that I have put into training. I will not regret that I got myself into really good shape, and I really appreciate these challenges (workouts and projects) that I have gone through that keep me sane and make myself better.


How have you challenged yourself?
Posted by Jayme Wyss at 11:24 AM