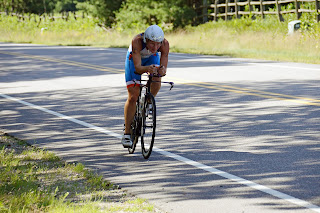 Andy somehow talked me into doing a little triathlon held locally in Three Lakes a week after Nationals (I mean – I was in shape, so why not, right?). A more unconventional triathlon, it was a point to point bike, run, swim race. It started with a 9.3 mile bike ride that ended at the host’s cabin, where we left our bikes in the yard, and proceeded to run a 5K away from the cabin to another cabin across the lake from our bike drop. From there we exchanged our run shoes for swim goggles and hopped in the lake to swim back across to the cabin where we had left our bikes (a short swim of only a couple hundred yards). 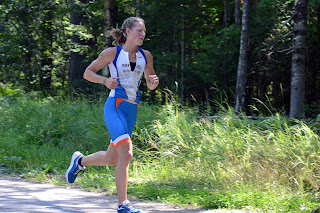 The question of the logistics of it probably piqued our interest the most, while the quarter mile of gravel before dropping our bikes at the host cabin intimidated me immensely. Around 40 people participated, and as I suspected, I was the only one there with a tri bike. The bike route was curvy, hilly, and fun – that is, until the end when I braced myself as I went over the gravel. Making it to the drop spot without wiping out honestly felt like a big success in itself! I was the first person off the bike, but I had a guy close on my tail who quickly passed me at the beginning of the run, and I never saw again until after I was done. 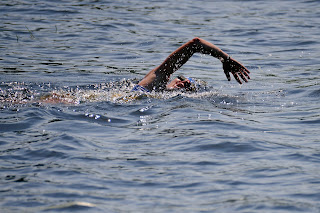 The run was brutally hilly. One long climb after another, and some were quite steep. The 3 miles felt so much longer than they should have! With about a mile left to go, another man came up alongside and passed me and I let him go, though I maintained not too far of a distance behind him. By time I got to the cabin to exchange my run shoes for my swim cap and goggles, I already felt toast and I took my sweet time getting down to the dock for the swim. Once I got there, I saw the #2 guy was backstroking, so I jumped in and quickly passed him. The group did not seem to contain much for strong swimmers. While it was refreshing to cool off with the swim, it was difficult to find my rhythm since I was so out of breath from the run. 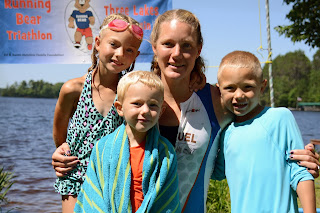 I came out of the water in under 49 total minutes – there was no way I thought I could do that! I ended up 1st female and 2nd overall, by only a minute and 18 seconds! So next year the goal would be to cut that time and try to beat all the boys ;) Along the route, Andy was at the side of the road taking pictures while the kids were yelling out of the van windows, “Go, Mom, go!” I think they got me through that run. The atmosphere was far different from Nationals, but it was a fun challenge. Who is with me for next year?!
Posted by Jayme Wyss at 12:24 PM