I know I have been off the map for some time now. Once I got behind on blog posts, it was easier to abandon altogether. But I’m back, just like racing!
I was registered for Nationals in Milwaukee for 2020, and our registration was thankfully deferred. Training looked a bit different this time around, as I lost access to a pool. In more recent years, I was also slow to start bike training because I really struggle mentally with getting on the trainer. In April though, I got outside for a ride and found the joy in biking again! As a result, I typically did 2 rides a week – one outside on the weekend and one short one on the trainer during the week. All swim training was in our (very dark, shallow, muck-bottom) lake. 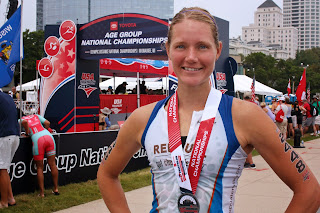 In May, Andy sent me a race listing for a fairly local duathlon, so I took the plunge and registered with a week’s notice. While I was the top female by over 5 minutes, I also realized how much harder I needed to be pushing on my bike rides, so the race served as a good kick in the butt.
As training went on and I was doing some of my fastest training rides I have ever done, and I was also putting down some fast brick runs (3-3.5 miles averaging 6:59-7:03 pace), I was feeling really excited and optimistic about Nationals. Years ago, I had in my mind the goal of making Top 10 and podium at Nationals (keep in mind, these ladies are FAST!), and I never accomplished that goal. Would this be my year?
The 1500m swim. I was doing at least 3 swims a week in our lake, but very few were even for the duration of the race. But most were done in my wetsuit and ALL were done in a lake. I felt strong and I thought that my sighting and rhythm had improved. But I had no idea how fast I was actually going! On race day, this time I felt the most comfortable, relaxed (in a good way), and confident for the swim. For once I looked at the course and thought – that’s not that far! (Something I have never thought with all my pool training days). The lake was cold (Lake Michigan after all), but it also felt so clean and refreshing. Andy said it was the best swim start he’s ever seen me have. I hit my goal of 25 minutes for the swim, which was also my 2nd fastest Olympic swim EVER! 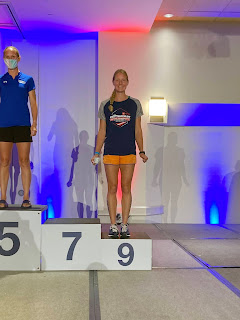 Off to the 40k (24.8 mile) bike leg. Due to drafting rules, there were a few hard surges in the beginning to get a good position and avoid penalties, but otherwise it was a good ride. Rolling hills are no big deal, but the bridge we rode in Milwaukee was definitely a speed suck. I just tried to stay aggressive, and I hit my goal time of 1:05, which was also my fastest bike split for the Olympic distance!
On to the 10k run! I thought my first mile might be slow coming off the bike, but my first 2 miles beeped as sub-7 pace. It was really hitting me after that point and I pep talked myself through the next miles, knowing I had to have 0 regrets when it was over – that even if I didn’t make podium, I knew I had given it everything I had on that day. My run ended up slower than what I was hoping for (goal was 43-44 minutes), and I ended with a 44:55 (7:13 pace).
My overall time of 2:19:44 was my second fastest Olympic distance race EVER and off from my best by just over a minute, which I did 7 years ago in 2014! For reference, I personally feel I had my best race performances in 2013 and 2014. To perform at this level at age 35 (as good as I was when I was 28!), with drastically LESS training volume, is nothing short of amazing.
Cheers to chasing goals, a more balanced life with training as a mom, and my family. My kids have put many miles on their bikes riding next to me while I run, and they cheer me on from the raft while I swim around the lake. My husband believes in me even when I don’t, and spends hours putting together memories for me – pictures and this sweet race recap video. So enjoy!
Posted by Jayme Wyss at 10:22 PM