Going Under the Knife

Pregnancy is rough on a woman’s body. It can have lasting effects as well. While I can’t say with 100% certainty that pregnancy caused my varicose veins (pregnancy is often a culprit for healthy young women), it first became visible when I was pregnant with Baya. With the 2nd pregnancy, it expanded, and after my 3rd pregnancy I think it was to the point that it ran from my thigh to my calf on my left leg. Over the years, it has only continued to worsen.
Varicose veins have a higher risk of blood clots, and while superficial, they can still be painful. They can also cause swelling and pain as well. A friend referred me to the Surgical Associates of Wausau to get mine taken care of. You can’t always see varicose veins either. The veins that were visible running from my thigh and squiggling their way down to my calf (with multiple sets of “bubbles” along the way), were actually the branches that came off from a vein that you couldn’t see that was also varicose.
I was on the waitlist hoping to get in before the end of the year (insurance put a 12/31 deadline on their approval). Last week, I got a phone call that they had a cancellation and could get me in the next day! Andy and I rearranged our plans and spent most of the day in Wausau. The surgeon had me stand while he marked all the visible branches because once I was laying down on the table, he wouldn’t be able to see them as well and wanted to make sure he got them all.
They used partial sedation and shots for local anesthetics the length of my leg. This meant that I was awake the entire time. They ablated the main vein underneath, and then made incisions (46 total) to pull out the visible branches. He started pulling those at my calf and worked his way up. By time he got to the last part of my thigh, the numbing medication was either wearing off, or it wasn’t enough as it was a very tender area! I was trying to hold still while crying and trying to calm through deep breathing. He gave me more shots, and the nurse gave me some anti-nausea medicine as well. Everything was fine until that last section! 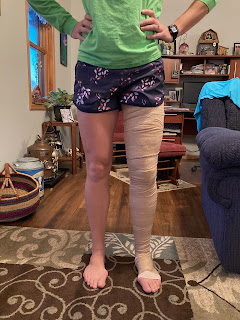 I did look at my leg before they wrapped me up, as well as saw the pieces of vein that they had pulled out! Sitting up made me very lightheaded and dizzy though. They took me to the recovery room where I was given more anti-nausea medicine. I was also able to eat and drink for the first time that day finally. Normally recovery is about a half hour, but I only left at 1.5 hours in order to be home when our kids got home from school. I still felt so sick! The nurse helped me dress and wheeled me out to the car.
At least we weren’t far from home when I finally threw up. Fortunately, I was also sent home with a vomit bag because of how I was feeling. I felt less nauseous, but I was still lightheaded and dizzy. Rowyn was sitting in the backseat patting my shoulder, “Sorry you don’t feel good, Mom.” What a sweetie! I took ibuprofen because that spot in my thigh really hurt still as well. The rest of my leg actually felt okay. I was able to eat some supper and drank a bunch of water. Andy carried me everywhere that night. The kids, especially my youngest who was home with me all of the next day, were super helpful. I had to keep the wraps on for the first 48 hours, but I’ll reveal what my leg looked like when the wraps come off in the next post!
Posted by Jayme Wyss at 9:06 PM