*Warning: this post does contain pictures that may be considered graphic.

After surgery, I was not to drive for the next 24 hours. I was also supposed to elevate my leg as much as possible and while sitting. I was allowed to walk and climb stairs starting the day after surgery. After I hit the 24-hour mark, it became less painful to walk, and walking helped to loosen up my calf and thigh, which felt very tight. I could not walk normal though at that point. For the first week I was to minimize standing for long periods of time, and not lift anything heavier than 30 pounds. I stuck to just walking that first week, except when I put on my ice skates again starting 5 days after surgery. I had one day to prepare for this, so I did use it to get in my run with over 1,000 feet of climbing so I could hit that goal before the end of the year! 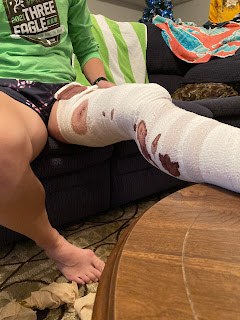 After 48 hours, I was supposed to take the bandages off and I could finally shower (no baths or soaking though). The first picture is the bandages after the ace wrap came off. It took a bit of work to get all the bandages off as some were stuck to me. I did not have any stitches. The 46 incisions were all glued with Dermabond. You can still see the blue marker outline from the doctor that he marked me up with prior to surgery. At the very top is where I had my big bleeder, so I have a large scab still there from that. There are a lot of incision marks in a large cluster on my calf as well. The worst initial bruising was at the top of my thigh above the first incision. I later had bruising from the top to the bottom. 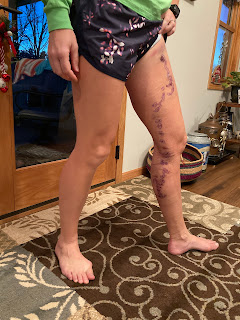 Since I was done with the bandages, I now wear medical grade compression tights during the day for the next 2-4 weeks. My thigh and calf had loosened up so I was walking normal at that point already. I had my one-week follow-up appointment where they did an ultrasound of the vein that was ablated to make sure that was successful (it was!), so all restrictions were lifted, and I would just need to continue to wear the compression for the next few weeks. I plan to ease back into running and lifting in the next week or two. It is still tender and sensitive from the bruising and I elevate it when sitting still. The doctor said that my leg will look ugly for the first 2 months because of bruising, so I guess that’s the bonus of it being winter. I’ll follow up with progress and healing pictures that will look much better than these!
Posted by Jayme Wyss at 7:03 PM