Timing for surgery could not have been any better! I had it on December 21, which meant that the first week post-op was during Christmas, when we go back “home” for several days to spend with our families. We always take a week off from lifting as a result, and it can be challenging to find good times to squeeze in a run. It had natural down time perfectly built right in. Plus, no feeling like I “had to” go for a run. 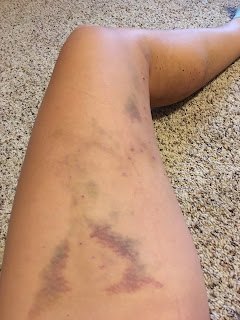 The day after, I walked some laps in our house in the afternoon, but after school, Baya convinced me to go down to the ice to watch them skate. Despite my protests (Too many stairs! I’ll freeze just sitting there!), Baya helped me put on my snow pants and boots. Andy had stayed out there until 10pm the night before shoveling off the big rink, but the small rink wasn’t cleared. I thought walking with a shovel would be okay until he got home. I ended up clearing off the entire small rink! It was fortunate that we did all that before leaving the next morning, as it ended up raining on Christmas Eve and it would have ruined anything that wasn’t shoveled, but it sure made the rinks nice!

I stuck to just walking the entire first week. Nine days after surgery, I took the kids to the Dome and jogged a lap with Rowyn. Despite being cleared to return to regular activity (with the advice of easing back into it), running did not feel great at that point. Since the kids were on break still for my 2nd week post-surgery, I decided to take advantage of that week and not worry about trying to run or lift yet. Instead, I did a lot of shoveling, ice-skating, xc skiing, and snowshoeing. It was great!

After 2 weeks off, the kids returned to school and I did my first run back on the treadmill. I just ran 1 mile at an easy pace and felt no pain! I also lifted with lighter weights afterwards. After 2 weeks off, I am okay with building back into mileage and will probably keep it to 12-15 miles this first week before hitting 20 or so miles next week (I was doing 22.5 miles typically before). Lifting felt fine, except box jumps made me nervous. I did not feel as powerful in that leg and it’s a higher impact. I think by the end of the week when I do them again though that I will be comfortable jumping more again.

The recovery experience has been impressive. After 2 weeks, most of the glue had come off. I had full range of motion without pain. There was still bruising, so the kids would bother it when they would crawl on my lap and kick around, but otherwise it was feeling good. Some of the incisions were barely noticeable already. Others will take a while longer to fully heal. I’ll wear the compression for at least a full 3 weeks before I wean off from them.