At 12 weeks, I competed in a duathlon, consisting of a 2 mile run, 14 mile bike, and 2 mile run.  I was excited for some quick, short distances.  My plan for the run was to go at a pace that was fast (yet I was comfortable with), and then planned to hammer it out on the bike, knowing that it was a nice, flat course.  My first run wasn’t anything impressive, as all the “real” runners took a decent lead ahead of me.  I knew this would most likely happen, but I felt like the bike leg was more of my strength, and so I definitely hammered it out.  It was exhilarating.  I felt good, pushing my speed and catching up to the lead. 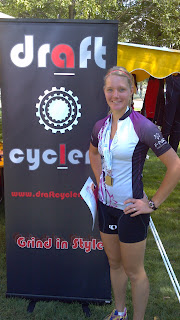 I came off the bike with my fastest split ever (I averaged 22 mph) and headed out on the run, feeling comfortable, relaxed, and with adrenaline pumping.  I held a pace that I could maintain and tried to keep my breathing calm and even.  A woman flew by me at some point, and I knew I could not even attempt to stay with her.  I crossed the finish line exhausted, but feeling good about how it went.  Then I found out that the woman who passed me was on a relay team, and I was the first individual female competitor to cross the finish line!  Best. Race. Ever!  That was the first race I've ever been the overall female winner - and I was 12 weeks pregnant!  From the start to the end, my body felt solid throughout the whole race.  I wouldn’t go back and change a thing.
The top male and female winners both received a jersey from Draft Cyclery (which I'm sporting in the picture to the right).  The conversations that I had with Draft Cyclery that followed ended up leading to a sponsorship by them! Now I'm decked out with a bunch of sweet bike gear for racing and training in both warm and cool weather – I would recommend them as they are worth checking out!
Posted by Jayme Wyss at 10:28 AM