I’d first like to state that I do not have a history of being a distance runner.  I did track in high school, but I mostly did field events, and was not very good at running events.  When I competed in track in college, I focused on the pole vault, which made me more of a sprinter, and not at all a distance runner.  After I graduated from college in 2010 and my track career ended, I began running distance to prepare for my first triathlon.  Now I like to get in at least one 5K before every race season.  I did my first 5K in 2010 in a time of 26:36 – nothing impressive (the 5K portion of my triathlon was faster than that thankfully).  A year later, I ran one in 22:17, and last year my best was 20:41.
I usually run my 5K’s with my husband, which was the case for this year’s as well.  I woke up so tired (no surprise there, huh?) and I had a cold.  I was definitely not feeling on top of my game.  I had been preparing for this race, but I wasn’t sure what I would be able to do.  I always want a PR when I run, but I didn’t know if it would be possible at this point yet. 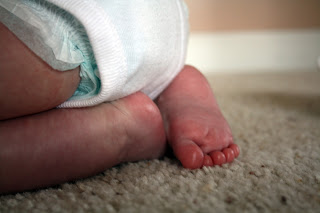 It was nice weather for a change and the 5K was a flat route.  I did this same race last year and won it with a time of 21:06.  I wore a GPS watch so I could try and watch my pace.  My goal was a 6:35 pace, but I had my doubts about it.  I mean, after all, I did just have a baby two months ago, and I had struggled with my running during pregnancy.  What was my body capable of?  I ended up winning the race (and surpassing my goal) with a time of 20:14 – a 27 second PR!
I did not know how quickly I would be able to come back from having a baby.  I never would have imagined that I could bounce back this soon though!  Because I remained extremely active throughout the entire pregnancy, and quickly resumed training afterwards, I never got out of shape and was able to make fitness gains rather fast.  I had been concerned about my running due to the difficulties I faced while pregnant, but I got my running legs back in short order!  I have been very blessed, and I am excited about the upcoming season!
Posted by Jayme Wyss at 6:12 PM