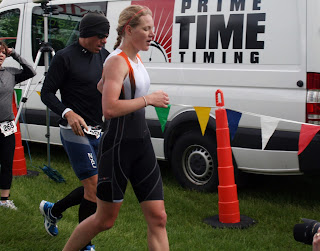 Last year, I did my first Olympic course triathlon at Green Bay.  I was so nervous leading up to the race last time.  This year, I’m just pumped!  I did not think I could feel this ready to race so soon after having a baby.  Since the beginning of 2013, I have swam over 190,000 yards, ran over 400 miles, and biked about 2,000 miles, putting in about 225 hours worth of training.  Oh yea, and I had a baby somewhere in the middle of all of that.  Details.  If I wouldn’t have had to slow down for pregnancy, I would have had a lot more run miles in, that’s for sure!
Green Bay has a great course, and with it taking place the first Sunday in June, it’s a great one to kick-off the triathlon season with.  Except it was a big tougher this year.  The temperature was around 50 degrees, and there were about 10-15mph winds.  Cloudy, windy, cold.  Doesn’t exactly make me feel like taking an outdoor swim, or hopping on a bike.  The swim is in a shallow man-made body of water.  We have to take two laps in order to get 800 yards in.  Despite the long-lasting winter, the water is fairly warm.  I was able to borrow a wetsuit from a friend, which also helped to keep me warm while waiting at the swim start.  Quite a bit of the swim is dolphin diving, due to it being so shallow for a chunk of the time, so this race isn’t the best test of how much faster of a swimmer I’ve become.  I dropped about a minute from last year’s swim time.  I practiced removing the wetsuit the day prior, so by the time I got to T1, I just had to pull it off my legs.  I felt like I was wasting time with it, but my time doesn’t really show that too much.
I hopped on the bike and headed out.  The first 20 miles (of a 29 mile ride) were brutal.  I kept telling myself there had to be a tail wind at some point.  I felt overly cautious with the wind.  I’m not sure if it was due to the accident, or just the inexperience with race wheels in the wind.  I definitely could feel the pull on the bike.  There was a lot of mental anguish when I was out there.  I slowed down too much for curves, and every time I touched the brakes I would scold myself.  My feet went numb.  My fingers were freezing, but it was bearable.  Finally we got some tail wind on the way back and I tried to use it to my advantage.  I had surpassed my swim goal, but my bike was not where it should have been.  I was hoping to cut the most time on the bike (from last year’s results), and I ended up coming in at about the same time.  I flew out of T2 and out onto the run.
My feet felt like bricks, and I kept telling myself that they would eventually warm up while running.  They started to tingle, but it took until I was about 2.5 miles into the run to finally feel a hint of warmth in them.  Not far into the run, I fortunately met up with a man also doing the long course, and both of us had a goal pace of 7 min/mile, and he was wearing a GPS watch.  We stuck together for the rest of the run, and actually held a sub-7 minute pace.  Despite my frozen feet, I felt really good on the run.  My 10K time for the triathlon was 42:44, faster than what my 10K time was, though this course seemed short and the other long.  Either way, I held a good pace and felt great!  I dropped about three minutes off of my run from last year’s race there, which I was not expecting, but it did make up for my poor bike split and I was still able to beat my overall goal time for the race by four seconds.  I was also the first female finisher, winning the event by over eight minutes!
I knew going into the race that I had wanted to be a contender for first, and that I have been training well to set myself up for that position, but it is also crazy to believe that I not only won the race, but I won it only three months after having a baby!  This was my first win of a triathlon, and I am hoping that it is only the beginning! You’ll never know what you are capable of if you are never pushed to your limits.
Posted by Jayme Wyss at 9:25 PM