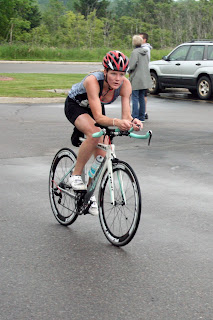 Two weeks after Green Bay, I was on the starting line for a duathlon, with Baya on the sidelines at 3.5 months old.  It’s a very awesome experience to see your husband on the side with your baby girl strapped to him!  The roads were wet from rain, and it sprinkled during warm-ups even.  I convinced myself the bike would still be fine, after all, I’ve done intervals in the rain and survived!
The first run was a 5K, and every took TOOK OFF crazy fast.  I did not want to do the same, and so for the first mile I had a ton of people running by me.  I did not have my GPS watch on, so I didn’t know my pace, but I tried to keep reassuring myself that I was holding a good pace, being conservative, I would hammer it in on the bike, and I’ll catch all those people later.  Coming in from the 5K, I was pretty far back in the pack, my placement being nothing impressive, with several women ahead of me, even though I had a time of 20:44 – a minute faster than what my goal even was. 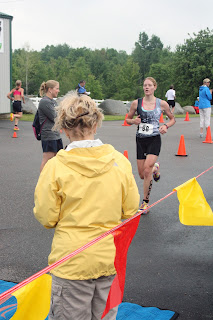 I flew through transition and headed out on the bike quickly, knowing I had some ground to make up, this is where I needed to make my move.  It didn’t take very long and I had passed all the females, setting myself up in a good position.  And then Bridget came riding up behind me and passed me.  We had raced at the Duathlon in Stevens Point last fall, when we took 1 and 2.  I could not let her get away from me.  I stayed on her, and then passed her, but I could not lose her.  She stayed on my tail for the majority of the ride, sometimes pulling up beside me to pass, but I was not letting that happen!  I tried to take turns just a little bit faster than her, just to keep an edge on her.  She pushed me out there, it was great! 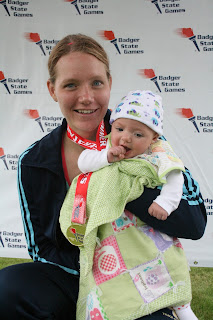 I finally put a little distance between me and her in the last couple miles coming in on the bike.  I sped through transition, not really knowing how much time I had on her, but afraid she might catch me.  The last run was only a 3K (less than 2 miles), and I knew I had to be quick.  I have a hard time telling my pace coming off the bike, but I felt so slow.  I wondered why I couldn’t move any faster.  I thought anybody could run faster than what I was doing!  I made the first turn around and saw I had a decent distance on her, one which would be tough for her to make up in the short distance we had left.  There was no letting up though.  It was time to be relentless, to make sure I secured my position.
Even though I felt slow, my pace for the second run was 6:14/mile, and it was more than enough to claim first.  Bridget finished about a minute later.  It was a fun race with her!  I was glad to have a competitor like her pushing me along the way.  One of my favorite things about winning this race though, was to have Baya with me (she was unable to attend Green Bay’s triathlon).  What an honor to receive a medal with my girl in my arms!
Posted by Jayme Wyss at 7:28 AM